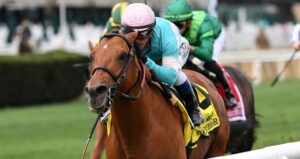 Since joining trainer Chad Brown’s stable in summer 2019, Rockemperor had come up just a touch short in multiple prominent turf events on the NYRA circuit. On Saturday, the 5-year-old Holy Roman Emperor bay finally earned his breakthrough victory, defeating a field that included four Grade 1 winners in the 44th running of the Grade 1, $500,000 Joe Hirsch Turf Classic at Belmont Park.

Owned by Madaket Stables, Michael Dubb, Wonder Stables, Michael E. Kisber and Michael J. Caruso, Rockemperor garnered graded stakes black type six times since being transferred to Brown, including a close second beaten a neck to stablemate Instilled Regard in last year’s Grade 1 Manhattan at Belmont. Previously trained in France by Simone Brogi, Rockemperor made his debut for Brown when a late-closing third in the Grade 1 Belmont Derby Invitational in July 2019.

“I’m so proud of the horse,” said Brown. “He’s been bridesmaid so many times and had a brutal defeat to Instilled Regard in the Manhattan last year. He has moved to the top of the list of one of the most deserving horses in our barn to win a Grade 1. He finally got it done.”

“I have to give credit to Sol Kumin, he was the first one to text me and say, ‘Shouldn’t we think about the Joe Hirsch?’,” Brown said. “Why not? He was doing really good and I’ve been really impressed with the horse in the morning. He’s always a good work horse.”

Brown admitted to being concerned at Rockemperor’s early position.

“I thought he would be closer. I thought he could be relatively close, but not pulling,” Brown said. “When it was a little bit crowded at the start, he found himself behind. I was quite worried because of his late one-paced nature that if he’s around those other horses like Gufo – who seem to kick a little harder than him – that he’d be in trouble. But this horse really responded today, and Javier really fit him perfectly.”

Brown made two equipment changes with Rockemperor, taking off the blinkers which he wore in his last four starts, and using a ring bit.

Castellano credited Brown for removing the blinkers, which he said made a big difference.

“I think he’s the type of horse that’s always keen going a long distance and is always pulling right away. I think the key is he told me he wanted to take off the blinkers,” Castellano said. “He’s a funny horse because if you leave him too far back, he doesn’t come. I think he was in the right place at the right time today. I think he was behind and it felt they went pretty quick, and he relaxed so well. When Gufo moved it gave me the opportunity to get to following. It was a key decision to get to win the race.”