Gaffalione Running Off With Keeneland’s “Riding Title” for October Meet

Gaffalione Running Off With Keeneland’s “Riding Title” for October Meet 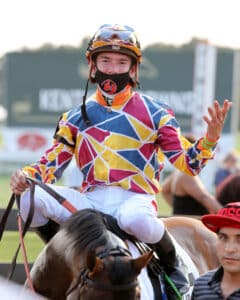 After Sunday’s races were completed, Gaffalione was running away with the “Rider’s Title” at this year’s Keeneland October Race Meeting. Running. Away. Away. Away. After 52 mounts, Gaffalione — who as emerged as the top shelf rider in Kentucky throughout the year, now — had amassed a whopping 15 wins, 4 seconds and 3 thirds. His horses are already closing in on nearly $1 million in earnings.

The next closes rider?

Well, Florent Geroux has 7 wins. And, Brian Hernandez has 6 wins.

Well, Flavien Prat has jettisoned in enough to win 4 races and win enough that his horses have earned over $829,000 in purses. But he’s still nearly $150,000 behind in that category.

Well, if you add up both Geroux and Hernandez together? They are still 2 wins behind. You would have to throw Irad Ortiz, Jr.’s 2 wins into the mix just to match Gaffalione’s record.

Those are wow numbers.

Here’s a look at the Top 25 riders this meet: