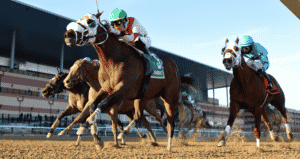 Trainer Rob Atras will have two chances to win the Queens County on Sunday when he saddles You’re to Blame and Olliemyboy in the $125,000 stakes for 3-year-olds and up going 1 1/8 miles over the main track at Aqueduct Racetrack.

A well-traveled 7-year-old son of Distorted Humor, You’re to Blame joined Atras’ barn two starts back when he was claimed out of a winning effort for $80,000 by Michael Dubb and Karen Murphy. Starting his career with Chad Brown, You’re to Blame broke his maiden in October of his 2-year-old season and earned his first graded stakes placing at 3 when he finished third in the Grade 3 Bay Shore at Aqueduct.

Moving to the barn of Todd Pletcher at the end of 2017, You’re to Blame earned his lone graded stakes victory when he took down the Grade 3 Greenwood Cup at Parx as part of a three-win campaign in 2018. An allowance victory in April of his 5-year-old season would prove to be his last until his optional claiming victory two starts back, picking up three more stakes placings and a second in the 2019 Grade 3 Pimlico Special in between.

Third in his latest start at Churchill Downs going 1 1/6 miles, the bay was beaten just two lengths after being held off the pace by jockey Joel Rosario. Asked by Rosario to make his move for the lead at the top of the stretch, You’re to Blame ran into some traffic trouble and was bumped by runner-up Major Fed to his inside, causing him to lose momentum. Despite the trouble, You’re to Blame kept to task and finished well to hold onto show honors.

After dabbling in the marathon division since a start in the Flat Out at Belmont last June, You’re to Blame seemed to relish turning back in distance this fall.

“I think he likes the mile and an eighth going two turns,” Atras said. “It hits him right between the eyes. Hopefully he runs a good race for us.”

You’re to Blame will break from post 1 with Dylan Davis in the irons.

Olliemyboy, an Ontario-bred son of Union Rags, will be making his second start for Atras after joining his barn in August. The 4-year-old’s first start for his conditioner came after a five-month layoff, finishing fourth in an optional claimer on August 30 at Delaware Park where he tracked in third but failed to threaten and tired in the stretch.

Fifth in his last start at Churchill Downs November 21, the dark bay went four-wide through the first turn and into the backstretch while being held off the pace by Ricardo Santana, Jr. Briefly taking command at the three-quarter marker, Olliemyboy once again faded in the stretch and was beaten four lengths.

“He had a couple of issues so it took us a while to get started with him,” said Atras. “He lost a shoe in his first race back. In his last race, he was a little too keen and close to the front. He took the lead and only got beat a few lengths.”

A win in the Queens County would provide Olliemyboy with his first stakes victory after finishing off the board in the Queens Plate at Woodbine last year and in the Grade 2 New Orleans Classic at Fair Grounds this year.

Charles Hallas’ Backsideofthemoon will try to earn a repeat victory in the Queens County after taking last year’s edition by six lengths. Trained by Rudy Rodriguez at the time of his victory last year, the 9-year-old gelding is now under the care of Patrick Reynolds, who received the gelding in August after finishing sixth in the Grade 3 Westchester for conditioner Robert Klesaris.

Backsideofthemoon’s best effort for Reynolds came when he was defeated by You’re to Blame by a head in an optional claimer on October 2 at Belmont. Settled to the rear of the field by Tyler Gaffalione, Backsideofthemoon tracked in fifth as Letmeno led the field through a half-mile in 46.77 seconds.

Roused by Gaffalione in the turn, Backsideofthemoon took command in the stretch and dug in gamely as You’re to Blame made his closing bid to his outside. Finishing three-quarter lengths ahead of third-place finisher First Constitution, Backsideofthemoon lost his advantage in the shadow of the wire and had to settle for second.

With a third and a fourth in his last two starts, Backsideofthemoon will be vying for career win number 9 in the Queens County.

Jose Lezcano gets the call to ride from post 2.

Bourbonic, trained by Hall of Famer Todd Pletcher, is searching for his first win since upsetting this year’s Grade 2 Wood Memorial Presented By Resorts World Casino in April with a last-to-first victory by a head over Dynamic One, giving Pletcher the exacta in that race.

Earning enough points to qualify for the Kentucky Derby with his Wood Memorial score, the son of Bernardini made the trip to Churchill Downs on the first Saturday in May and finished 13th in the field of 19.

Fifth in the Grade 1 Belmont next time out, the Calumet Farm homebred’s best finish this year came when he finished third beaten just 2 ¾ lengths with another off-the-pace effort in the Grade 3 West Virginia Derby at Mountaineer in August. The 3-year-old colt stepped back up to Grade 1 company in his next start and finished fifth in the Pennsylvania Derby.

Fourth in the Discovery last time out, Bourbonic worked a half-mile in 50.48 over Belmont’s dirt training track December 12.

Bourbonic will be racing with blinkers off and breaks from post 3 with Kendrick Carmouche up.

Trin-Brook Stables’ Forewarned defeated a large field of Ohio-breds when he took down Mahoning Valley’s Best of Ohio Endurance two starts back by a comfortable 3 ½ lengths. Trained by Uriah St. Lewis, the son of Flat Out broke next-to-last in the field of 12 and made steady progress throughout under Sonny Leon.

Tucked into the rail down the stretch for the first time, Forewarned began to pick off his foes after three-quarters in 1:12.62, cruising through the inside path under a strong hand ride from Leon. With the top five runners bunched up towards the middle of the racetrack at the top of the stretch, Forewarned continued to find running room along the rail and was clear at the eighth pole, pulling away strongly to finish the 1 ¼ miles in 2:06.73.

Fourth in the Richard W. Small at Laurel last time out, Forewarned has made two starts at the Big A with a fourth in the Bernardini and a fifth in the Cigar Mile in 2019.

The Queens County, named for the political subdivision of Aqueduct Racetrack, is carded as Race 8 with a 3:37 p.m. Eastern post time. First post for Sunday’s nine-race card is 12:20 p.m.

Sign Up
The Pressbox · 12 minutes ago
@thepressboxlts
May I please get 2 followers to COPY and re-post this tweet?