“I am tremendously excited to announce the launch of this fresh, new web suite. Our products will be informational and entertaining, and will bring comprehensive, accurate, fair and newsworthy content to every segment of the industry. Website visitors, webcast viewers and podcast listeners can access each of our products thru one clean, concise and informative web portal” said Gene McLean, conceptual Founder of the Louisville Thoroughbred Society and its media outlet, “The Pressbox.”

“We will feature video segments, as well as audio podcast content. We will preview major stakes races, forecasting race scenarios as well as commentary and in depth analysis of race results”.

“But, in the end, what will set us apart are depth of industry experience within our team of media and handicapping experts. Experts which include some of the most noted professionals in the industry. As well, our total commitment to accuracy in reporting, our commitment to impartiality and a pledge to treat everyone in the industry with a sense of fairness and professionalism,” said McLean.

First Kiss, owned in part by Gene McLean, is our newest hopeful.

Gene McLean is the publisher of The Pressbox.

Gene McLean, a native of Midway, Kentucky, began his professional career in December 1977 as a sportswriter and columnist for the Lexington Herald-Leader in Lexington, Kentucky. For 11 years, McLean was recognized as one of the state’s best writers, winning many awards including the prestigious “Sportswriter of the Year” honor in 1986.

During his term, McLean was actively involved in getting simulcasting legislation passed to help promote thoroughbred racing throughout Kentucky and beyond. Subsequent to his service with the KTA-KTOB, McLean served as the first President of Kentucky Off-Track Betting, Inc., and established four off-track wagering facilities throughout the Commonwealth.

Gene McLean graduated from Eastern Kentucky University in 31/2 years with dual Bachelor of Science degrees in Journalism and History, and minors in Public Relations and Political Science with a cumulative grade point average of over 3.7 out of a possible 4.0. Two years ago, McLean was voted into the “Media Division” of the Ohio Valley Conference Hall of Fame. It was one of the greatest honors of his career, to date.

Gene’s favorite track is Churchill Downs. His favorite jockey is Gary Stevens and his all-time favorite horse is Personal Ensign.

Hi, I'm Kelly Sears and I live in the great state of Kentucky, home of basketball, bourbon and racehorses. I am fortunate to have traveled to some amazing places with some incredible scenery. Picking up a camera gives me the opportunity to capture tidbits of this crazy, unique and unpredictable life we live!

I especially love the idea of grabbing a moment, whether a sunset or a field of green or an unusual cloud, knowing that moment will never happen again!

In addition to his work at WKYT, Dave has been involved with the broadcast of events for the Southeastern Conference for over two decades. He’s a part of the SEC’s basketball television package broadcasting men’s and women’s basketball games for The SEC Network and the SEC Network +. Dave has also twice been a part of Turner Sports “TeamCasts” for the Final Four. During his time at WKYT, Dave has covered the Kentucky Wildcats in five Final Fours and three national championships in 1996, 1998 and 2012.

Rob Murphy is a former professional baseball player who was a relief pitcher in Major League Baseball for eleven seasons in the 1980s and 1990s. Murphy played college baseball for the University of Florida, and was picked by the Cincinnati Reds in the first round of the 1981 Major League Baseball Draft. In addition to the Reds, he played for the Boston Red Sox, Seattle Mariners, Houston Astros, St. Louis Cardinals, New York Yankees, Los Angeles Dodgers and Florida Marlins.

A horse racing and thoroughbred enthusiast, Murphy has devised his own method for handicapping and breeding. Murphy's company, M375 Thoroughbreds, Inc., has bred, raised and raced successful horses such as Platinum Tiara, Swing and Miss, Diamond Studs, Strike Three and Golden Spikes.

Alex McLean Sharp – a native of Lexington, Kentucky – is the owner and and publisher of Lex What Wear, a fashion and lifestyle blog with a southern twist. Sharp recently moved to Nashville from New York City, where she fulfilled her lifelong dream of working in fashion. She graduated from Western Kentucky University wi th a degree in public relations and marketing.

Sharp worked in public relations before diving further into the retail fashion business. She loves social media and said she can’t go a day without Instagram or Pinterest. Sharp loves watching both reality television and her beloved Kentucky Wildcats. Even though she’s a Nashville girl now, she still loves her old Kentucky home.

Fashion, Sharp says, “is personal and style is more than skin deep. There are few rights and wrongs when it comes to what you wear as long as you love it and you wear it with class and style.”

Aaron Bacon has been active with the web industry since graduating from Indiana University in 2005. He worked his way through the corporate world from developer to managing a website team. In 2012 he launched MoDuet.com, a web shop focusing on WordPress websites and hosting. Aaron is a contributor with articles that provide a history and insight to the thoroughbred industry.

Dan Liebman attended his first Kentucky Derby in 1973 when, from the infield, he saw a glimpse of Secretariat, still today the greatest horse he has seen race. He later worked full time in equine journalism for more than 25 years, his last full time position as Editor in Chief of The Blood-Horse. Today he owns Staxx BBQ in his hometown of Frankfort, Ky., but continues to follow Thoroughbred racing as a journalist, fan and handicapper.

Freelance writer / photographer / and solicitor of advertising and sponsorships 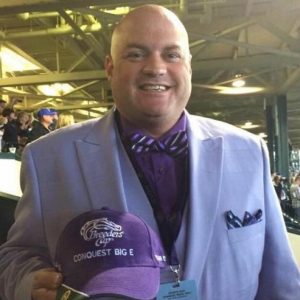 Before starting his career of public service, Dickey served as a “Race and Sportsbook Supervisor” in Las Vegas; a licensed Realtor; and as a Security Supervisor at Ford Field in Detroit. He attended both Bowling Green University and UNLV before finalizing his bachelor’s degree at Siena Heights University in Adrian, MI. with a Bachelor’s of Applied Science degree in Public Safety Studies.

With nearly 30 years of advertising and marketing experience, Paul launched his own company, PJB Marketing, in October of 2012. Prior to that, he was the Director of Creative Services at Lexington based Cornett IMS, where he was fortunate enough to be lead creative on many local, regional and national accounts. Paul has extensive experience in all aspects of traditional and digital media.

Molly has provided accounting services to several thoroughbred horse farms and sales agencies throughout the bluegrass. Her horse industry experience gives her the insight and understanding needed to provided sound accounting practices associated to the thoroughbred services industry. Molly has lived in the Lexington area along with her husband David and their dog Luci for most of her life.

Holly is a freelance photographer based in Louisville.  While she maintains a full time job outside of the thoroughbred/horse industry she spends most of her free time around the racetrack.

Horses and photography have been a part of Holly's life going all the way back to elementary school.  In 2015 after American Pharoah won the Kentucky Derby she decided to pick up the camera again and get back into the game.  Since then she has covered events such as the Kentucky Derby, Breeder's Cup, Queen's Plate and various other racing events.

In her spare time, she enjoys gardening, watching reality tv shows, and spending time with her fur kids, who still love her even though she isn't home much during racing season!

Holly is a proud alum of  Franklin County High School and University of Kentucky.  She also serves on the UK Greater Louisville Area Alumni Board.  Connect with Holly on Twitter @kyholmarie.