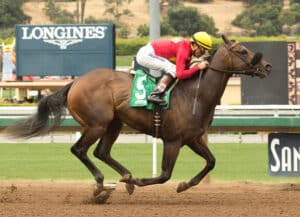 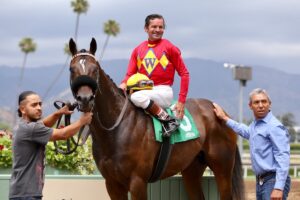 Graded stakes placed American Pastime (Tapizar – Ryan’s Inheritance, by Valid Expectations) joins the stallion roster at Swifty Farms in Seymour, Indiana, for the 2022 breeding season. The sprinter will stand for $1,500 stands and nurses.

“His speed was fantastic on the track; he was an extremely fast horse,” says owner Mike Mowrey. “His Beyer numbers early in his three-year-old year were phenomenal—with zeroes and ones on ThoroughGraph—which is why he fit into the sprinter mold.”

Mowrey notes that he and trainer Bob Hess, Jr., discussed trying the colt at a mile, but he  suffered a bruised foot at the Breeders’ Cup, which made it difficult for him to return to racing at 100 percent effort.

“His best attribute is his speed, but his personality is unparalleled to any horse I’ve ever owned,” says Mowrey. “He’s a very smart horse—he’s calm, cool and collected, but when he got on the track, he meant business. If he passes on his speed and his personality, I think his foals will be pretty precocious.”

Mowrey chose Swifty Farms for the colt’s first full breeding season because of the many opportunities the farm and the state of Indiana presents for stallion owners.

“With the breeding program they have in Indiana and the sire awards, it was very attractive,” he says. “The location of Swifty, with the proximity to Kentucky and surrounding states, was perfect. And the cherry on top was Swifty’s addition of (stallion manager) Jerri Harmon. I just felt that he will be in a good place, and if you’re in a good place, good things happen. That’s why I wanted to give him that opportunity.”

“We think the addition of American Pastime to our roster will expand the offerings Swifty Farms has, as well as bring a new set of bloodlines to the state,” says Harmon. “He’s settled in quite well and we’re looking forward to seeing what his breeding season brings us.”