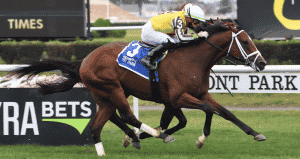 Bass Racing’s homebred Annapolis will try for his first win of the year in Monday’s $100,000 Manila, a one-mile Widener turf test for sophomores at Belmont Park.

Trained by Hall of Famer Todd Pletcher, Annapolis enters from a troubled runner-up effort over soft going in the Grade 2 Penn Mile on June 3 at Penn National. The War Front bay broke alertly and settled in second position before Wow Whata Summer rushed up the inside to move Annapolis into third for the trip down the backstretch. Irad Ortiz, Jr. angled Annapolis four-wide in the turn, but he spun his wheels over the soggy ground and could not reel in upset winner Wow Whata Summer.

The Penn Mile was the first start off an eight-month layoff for Annapolis, who closed out his juvenile campaign in October with a gritty head victory in the Grade 2 Pilgrim over firm Belmont turf going 1 1/16 miles. The win came on the heels of a runaway debut maiden score going the same distance at Saratoga Race Course that September.

“He’s only had the one race off the layoff so we were trying to decide if the mile and a quarter is what he wants to do now or if we should get another shorter race into him before Saratoga,” said Pletcher.

Pletcher said Annapolis has grown from two-to-three and continues to train forwardly.

“Physically, he’s done great. He looks super and he’s always been a very professional horse to train,” said Pletcher. “It was tough to gauge the race at Penn. It was bottomless ground and I thought despite that, he tried hard.”

Annapolis worked a sharp five-eighths in 59.81 seconds over Belmont’s inner turf course on June 24, the third bullet from his last four works.

Pletcher will also be represented by multiple stakes-placed Chanceux, who was third last-out in the Paradise Creek sprinting seven furlongs at Belmont. Owned by Harrell Ventures, Chanceux began the year with an off-the-board finish in the Texas Turf Mile in January at Sam Houston and followed with a two-length first-level allowance victory in March at Gulfstream. His other start this year was a close third in the Woodhaven going 1 1/16 miles over firm Aqueduct turf in April.

Flavien Prat will ride again from the inside post.

D.J. Stable and breeders Chester and Mary Broman will hope to see the New York-bred Coinage return to winning ways after a disappointing trip to Churchill Downs on Kentucky Derby Day.

Coinage, a chestnut Tapit colt out of Grade 1 Breeders’ Cup Filly and Mare Sprint winner Bar of Gold, enters from a distant eighth-place finish in the 1 1/16-mile Grade 2 American Turf at Churchill where he tracked in third under Florent Geroux and faltered at the stretch call to finish well behind the victorious Stolen Base.

Hall of Fame trainer Mark Casse said that Coinage was bothered by the commotion of the large crowd in attendance that day.

“I’m just throwing that race out. That was not any indication of his true ability. I don’t know what got into him. He was terrible in the paddock and in the gate and people could hear him kicking on TV,” Casse said.

Coinage was a graded stakes winner in his turf debut after making his first three outings on dirt, putting together a professional performance in the Grade 3 With Anticipation in September at Saratoga Race Course. He followed with a third-place finish in the Nownownow in September at Monmouth and an uncharacteristic ninth in the Grade 1 Breeders’ Cup Juvenile Turf to finish out his 2-year-old campaign in November at Del Mar.

The Manila will be Coinage’s first time racing at one mile since a neck win in the Palm Beach in March at Gulfstream Park, something Casse said won’t be a problem for the consistent colt.

“The cutback isn’t going to bother him. It was a very good effort in the Palm Beach. I would expect [another] good effort,” said Casse. “He creates some of his own problems, and he just needs things to go a little more his way.”

Coinage has earned two graded placings this year with a pair of thirds in the Grade 3 Kitten’s Joy in February at Gulfstream and Grade 3 Transylvania in April at Keeneland. Luis Saez, who was aboard for the With Anticipation and Palm Beach, gets the call from post 4.

An Ontario-bred son of American Pharoah, Boston Tea Party made it look easy when he took down a six-furlong maiden special weight on May 29 over firm Belmont turf. He tracked in third under patient handling from Eric Cancel and traveled comfortably as Codys Express set a quick tempo in front.

Cancel swung Boston Tea Party three-wide in the turn and gave a strong ride as his mount ate up ground and easily put away his rivals, powering home a three-length winner in a final time of 1:08.31.

Dutrow said he was impressed with the effort Boston Tea Party gave.

“He’s doing great. He’s making a big step up. Eric told me he was relaxed, but that race was six furlongs and they went really fast,” said Dutrow. “So, although it might have seemed he was relaxed, he was still going plenty fast. But we’ll see if he’ll settle and listen to the rider stretching out to the mile. He was good that day and it was impressive.”

Out of the multiple stakes-winning Speightstown mare Pirate’s Trove, Boston Tea Party took some time to mature, but has been worth the wait.

“In dealing with this boy, I wouldn’t have thought in the first month we had him that he would turn into a decent kind of horse,” Dutrow said. “He was a handful to train and he was nervous and upset. He was really working against himself. But he just has been getting a little better in all those aspects. He’s good and that’s why we’re going in this race. I don’t see any downside to trying.”

Boston Tea Party will emerge from post 5 with Cancel in the irons again.

Donegal Racing’s Ready to Purrform was beaten a neck last time out by Joe in the James W. Murphy on May 21 at Pimlico Race Course. Trained by Brad Cox, the son of Kitten’s Joy won the 1 1/16-mile Laurel Futurity in October and finished seventh in the Qatar Golden Mile in November at Del Mar to close out the year. He kept on gamely in the James W. Murphy after taking command at the stretch call under Florent Geroux and was just nailed at the wire.

0
0
The Pressbox · 2 hours ago
@thepressboxlts
Ellis Park's Own Could Have Shot at This Year's Groupie Doll Stakes - https://t.co/atuLUmEYzb https://t.co/M2R5uyTu8s
View on Twitter