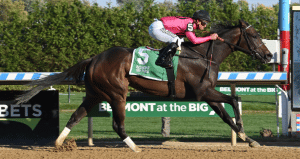 Owned by Wachtel Stable in partnership with Pantofel Stable, Gary Barber and Jerry Zaro and trained by Hall of Famer Bill Mott, Baby Yoda was most recently a close second as the favorite in the Grade 2 Kelso Handicap on October 29 at Belmont at the Big A. He set a moderate tempo on the backstretch before being passed up by upset winner and probable returning rival Double Crown inside the sixteenth pole.

A four-time winner of eight starts this season, the 4-year-old Prospective gelding defeated starter-allowance company going six furlongs twice in Kentucky at the beginning of the year before securing allowance optional-claiming scores on the NYRA circuit going seven furlongs and a one-turn mile, respectively. He was a narrowly-beaten second in the Pelican at Tampa Bay Downs in his 2022 debut and was a distant second to Flightline in last year’s Grade 1 Malibu at Santa Anita.

Baby Yoda worked a half-mile in 48.60 over the Belmont Park training track on Saturday.

“He’s a little bit of a folk hero, but he’s never won a stakes race,” Wachtel said. “He’s come close a couple times, he finished second to Flightline in the Malibu. I would hope that we get some weight from some of these others. But so far, that’s the plan. If he comes out of yesterday’s work in good shape, we’ll be there next Saturday.”

“That was quite something. I came up that day on a last minute trip and I knew he was training well and I knew how good Olympiad was,” Wachtel recalled. “That was quite the extraordinary effort. The next morning, I was at the training track and other trainers that I knew were making comments about how good the horse was. He’s been a really cool horse that’s run in big races against big competition. We gave him a little class relief in Kentucky this spring running in some starter races, just trying to get his confidence back up.”

Wachtel, who is a part-owner of the Mott-trained 2020 Champion Male Turf Horse Channel Maker, said the 8-year-old son of English Channel will remain in training in 2023. The earner of over $3.7 million was seventh in the Grade 1 Breeders’ Cup Turf on November 5 at Keeneland last out to cap off a season which included victories in the Grade 2 Elkhorn in April at Keeneland and the Grand Couturier in July at Belmont Park.

“Physically, the horse looks unbelievable. He’s 8-years-old and Bill and his staff said this summer that he looks better now than he did two years ago,” Wachtel said. “He’s all dappled out and he looks phenomenal, and he hasn’t lost anything. As long as he is physically well enough, we see no reason why we shouldn’t go on with him. He’s getting a little break, but he’s not leaving the track. We probably won’t run him until late February at the earliest.”

Trained throughout her career by Brendan Walsh, the 6-year-old Temple City mare entered the 11-furlong inner turf test for fillies and mares 3-years-old and up from her first career graded win in the 12-furlong Grade 3 Dowager on October 23 at Keeneland.

Jose Ortiz, aboard the dark bay for the first time in the Long Island, enjoyed a ground-saving trip, advancing along the rail through the final turn and avoiding traffic trouble as pacesetter Big Time Lady checked out sharply at the three-eighths pole. Ortiz angled Temple City Terror off the rail for the stretch run and reeled in Kalifornia Queen and then Rocky Sky to secure the win which garnered a career-best 99 Beyer Speed Figure.

“He gave her a great ride and it was a good effort from her to beat some nice fillies. We’re very pleased with her,” Walsh said. “She came out of the race great. It seems like she’s only getting better. We’re delighted with her and hopefully she keeps getting better as we go along.”

Temple City Terror has enjoyed a solid 6-year-old campaign, including a successful title defense in the Keertana in May at Churchill Downs and a game second to multiple Grade 1-winner War Like Goddess in the Grade 2 Flower Bowl in September at Saratoga Race Course.

Walsh indicated that the mare has improved with racing and was pleased to secure a win at first asking for her new connections.

“She’s gotten very good the last year and a half or so. It’s great to see,” Walsh said. “They [Town and Country Racing] were delighted. Obviously, having shelled out a lot of money for her at the sale, it was a just reward. Hats off to them for putting their money up. They were partially rewarded the other day and hopefully rewarded in full as time goes on.”

Shannon Potter, CEO of Town and Country Racing, said following the race that Temple City Terror will remain in training with an eye towards stakes action at Gulfstream Park. The first option for the mare at Gulfstream would be the 12-furlong Grade 3, $150,000 La Prevoyante on January 28.

“We’ll see how she’s training before we come up with any more plans, but obviously those longer races would be on the cards for sure,” Walsh said. “We don’t have any definite plan yet.”

Harrell Ventures and Starlight Racing’s Bat Flip has found his mojo going two turns on the grass following an impressive triumph in Saturday’s $120,000 Central Park for 2-year-olds going one mile over the Big A outer turf. He will now shift attention to a sophomore campaign in South Florida according to Hall of Fame trainer Todd Pletcher.

A son of freshman stallion Good Magic, Bat Flip earned an 80 Beyer Speed Figure for his 1 1/2-length victory over Dandy Handyman in his stakes debut. He entered the Central Park off a fourth-out maiden victory going 1 1/16 miles on October 23 at Belmont at the Big A.

“I like the way he finished and it looked like he was full of run in the gallop out as well, so it gives you confidence in some of these bigger races that they have next year,” said Pletcher, who used the 2020 Central Park as a springboard to a productive 3-year-old campaign for Never Surprised.

Pletcher said Bat Flip would join the bulk of his stock on the journey to Palm Beach Downs in South Florida, where he will remain in light training with the possibility of targeting action on the Gulfstream Park stakes program.

“I need to talk to the connections, but we’ll take him down to Palm Beach Downs,” Pletcher said. “We’ll probably freshen him up a little bit but still keep him in training and maybe run him at Gulfstream once or twice.”

Bat Flip made his first two starts in dirt sprints at Saratoga, finishing a well-beaten fifth and fourth, respectively. He made his turf debut when second to graded stakes winner and Grade 1 Breeders’ Cup Juvenile Turf runner-up Nagirroc on September 24 going six furlongs at Belmont at the Big A.

“We just felt like he was sort of bottoming out on the dirt, so we felt like it was worth a try on the turf. It looks like that was the right move with him,” Pletcher said.

Bred in Kentucky by Fifth Avenue Bloodstock, Bat Flip is out of the Harlan’s Holiday mare Krazy Kathy – a full-sister to graded stakes winner and Pletcher alumnus Intense Holiday and a half-sister to turf graded stakes-winning millionaire Money Multiplier. He was bought for $350,000 at the 2021 Fasig-Tipton Saratoga Select Yearling Sale, where he was consigned by Indian Creek.

“He’s doing great and has had so many treats,” said Wilson over the phone with Greeley and Ben beside her. “He’s his happy self.”

Owned by Darryl Abramowitz, Greeley and Ben stalked and pounced from 3 1/2 lengths off the pace in rail-skimming fashion under Manny Franco to land the narrow victory in a dramatic finish. It was a four-way photo for the win with Runninsonofagun, Factor It In and Jaxon Traveler all making a winning drive for the wire, but it was the evergreen Greeley and Ben who stuck his neck out and took home the winner’s share of $96,250. He was awarded a career-best 98 Beyer Speed Figure for the effort.

“It was very impressive. I’m certain I made quite a scene,” said Wilson, with a laugh. “I got nervous because the big grey horse [Factor It In] was coming to him, but my mom said, ‘He’s won 22 races, he knows where the wire is.’”

The Fall Highweight marked the second consecutive victory for Greeley and Ben, who entered from a tidy 1 3/4-length allowance coup over the same track and distance on November 10. That effort came after finishing a gutsy fourth in the Grade 3 Bold Ruler in October at Belmont at the Big A where he was defeated three-quarter lengths by Runninsonofagun, runner-up in the Fall Highweight.

Greeley and Ben, an 8-year-old son of Greeley’s Conquest, made the grade in his 39th start, scoring the well-deserved victory in his third attempt at the graded level. His previous best finish in graded company was a close third in the Grade 3 Whitmore this March at Oaklawn Park for previous conditioner Karl Broberg. He was purchased for $80,000 at this year’s Fasig-Tipton July Horses of Racing Age Sale and made three starts for trainer David Jacobson before being haltered by Abramowitz and trainer Jeffrey Englehart for $40,000 out of a winning effort in September at Saratoga.

“It’s very exciting to get this win, especially with him,” said Wilson, who took over training duties for Englehart’s horses this week while he served a 10-day suspension that ended Wednesday. “Ever since we claimed him, we immediately said, ‘Wow, this horse has a lot of back class.’ He just has such a presence about him and he carries himself so nice on the track. He just does everything right. He acts like a really classy old horse, and he proved it yesterday.”

Wilson is the daughter of trainers Bill and Donna Wilson and has been involved in horse racing throughout her life. After working for several trainers, including Hall of Famers Steve Asmussen and Todd Pletcher, she became an assistant for Jeffrey Englehart last year while keeping her own small string to train under her name. She scored her first win with a filly named La Luisa last June at her home base of Monmouth Park.

“My parents were trainers when I was younger and my father worked for top people, so I spent my summers in Pletcher’s barn and Asmussen’s barn,” said Wilson. “I had show horses my whole life and I have a pony here. I have a couple of my own that I keep in training just for myself. I just love it.”

Greeley and Ben’s Fall Highweight conquest was the fourth career win for Wilson, who also won earlier on Saturday’s card with Victory Built in a state-bred allowance. The son of Big Brown earned the fourth win of his career in his 41st outing, holding off a late rally from Agility to win by 1 3/4 lengths under Dylan Davis.

“He’s good. He’s a big, fat horse and nothing stays in his feed tub,” said Wilson. “I said to Dylan, ‘You were making me sweat a little bit,’ and Dylan said, ‘No, he was just toying with that horse.’ He could have pulled away from him any time he wanted to. We were really happy.”

Possible: Get Her Number (Peter Miller)