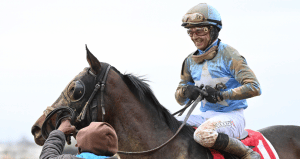 Cloud Nine Stable’s Betsy Blue will see added ground as she seeks to begin her 5-year-old season on the right foot in Saturday’s $100,000 Interborough for fillies and mares 4-years-old upward going seven furlongs over the main track at Aqueduct Racetrack.

Betsy Blue, who boasts a record of 20-9-7-2 and field-best earnings of $604,510, enters off a 1 1/4-length triumph in the six-furlong Garland of Roses on December 10 here. The daughter of Tonalist took to the rear of the five-horse field, moving off the rail into the stretch and collared pacesetter Beguine in the final strides to the wire.

Bred in New York by Blue Devil Racing Stable, Betsy Blue was claimed by Rice out of a Big A starter optional claimer for $50,000 in March 2021. Two starts later, she earned her first stakes conquest when capturing the Bouwerie that May at Belmont Park by 5 1/4 lengths.

She competed mainly against open company last year, including a six-length romp in August at Saratoga Race Course going the Interborough distance that earned a career-best 96 Beyer Speed Figure. Following a close fourth in the state-bred Iroquois in October at Belmont at the Big A, Betsy Blue tried graded stakes company for the first time in the Grade 3 Go for Wand on December 3 going a one-turn mile at Aqueduct, finishing third beaten eight lengths.

“I think her kick is most effective at 6 1/2 furlongs,” said Rice, who captured the 2016 Interborough with La Verdad. “She likes a fast pace in front of her and then to just lay off it. But she’s pretty versatile and gives you an effort every time whether it’s a mile, seven or six [furlongs].”

Rice will also saddle Winning Move Stable’s Piece of My Heart, who recently defeated local allowance company going seven furlongs on January 5. The 6-year-old Flat Out chestnut has finished no worse than second in her last four starts, including a runner-up effort behind Betsy Blue in September over the Ozone Park oval. Her last out triumph was her first victory since capturing Oaklawn Park’s Gardenia in May 2020, when trained by McLean Robertson. Piece of My Heart was claimed by Rice for $62,500 following a fourth-place finish in July at Saratoga.

“I think the seven-eighths is a good distance for her. Six furlongs is a little short, she’s always struggling to get going by then,” Rice said.

Betsy Blue will be piloted by Jose Lezcano from post 5, while Kendrick Carmouche picks up the mount aboard Piece of My Heart, who will leave from post 3.

Aveen Campion’s Flight to Shanghai enters off a distant fourth in the Go for Wand for trainer Horacio De Paz. The 5-year-old Shanghai Bobby bay boasts a consistent 16-3-3-2 record, including a third-place finish in the two-turn Serena’s Song in May at Monmouth Park for former trainer Jane Cibelli.

The Go for Wand was Flight to Shanghai’s first start for De Paz, who said he was encouraged by the effort.

“She’s been very forward and consistent in her training,” De Paz said. “The Go for Wand was a pretty good, honest effort on her part. If you consider the field of horses she ran against, it was a huge step up.”

Breaking from post 4, Flight to Shanghai will be piloted by Jorge Vargas, Jr., who rode Bella Aurora to victory in the 2021 Interborough.

Stoneway Farm’s Kentucky homebred Miss T Too seeks her first victory since September 2020, entering off a pair of third-place finishes for trainer Michael McCarthy. The Into Mischief 6-year-old bay contested the all-weather surface at Turfway Park in a last out allowance event going six furlongs on December 15, which came after a five-furlong allowance tilt on November 10 at Churchill Downs.

Eric Cancel will ride Miss T Too from post 2.

The Interborough is slated as Race 8 on Saturday’s nine-race card. First post is 12:20 p.m. Eastern.

America’s Day at the Races will present live coverage and analysis of the Aqueduct winter meet on the networks of FOX Sports. For the broadcast schedule and channel finder, visit https://www.nyra.com/aqueduct/racing/tv-schedule.

Sign Up
The Pressbox · 46 minutes ago
@thepressboxlts
Horse to Watch: Capella May Be On the Rise - https://t.co/OyTQYyvBGI https://t.co/ib4Ubigmrs
View on Twitter

0
0
The Pressbox · 55 minutes ago
@thepressboxlts
Hoosier Philly: Could KY Derby Be in Her Future? - https://t.co/qHEau3QXA4 https://t.co/W4i0mL6tZ1
View on Twitter

0
0
The Pressbox · 46 minutes ago
@thepressboxlts
Horse to Watch: Capella May Be On the Rise - https://t.co/OyTQYyvBGI https://t.co/ib4Ubigmrs
View on Twitter

0
0
The Pressbox · 55 minutes ago
@thepressboxlts
Hoosier Philly: Could KY Derby Be in Her Future? - https://t.co/qHEau3QXA4 https://t.co/W4i0mL6tZ1
View on Twitter

The Pressbox46 minutes ago
New post added at The Pressbox - Horse to Watch: Capella May Be On the Rise

The Pressbox55 minutes ago
New post added at The Pressbox - Hoosier Philly: Could KY Derby Be in Her Future?

The Pressbox59 minutes ago
New post added at The Pressbox - Romans: Cyclone Mischief Is Fine