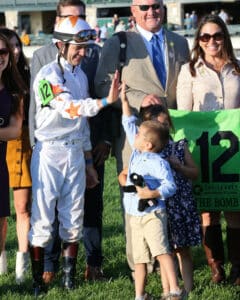 The Gio Ponti is one of three stakes on a packed Friday card, including the Grade 3, $200,000 Comely at nine furlongs for sophomore fillies and the $150,000 Forever Together in a 1 1/16-mile turf test for fillies and mares.

Trained by Cherie DeVaux, Monition hasn’t put a foot wrong through two career starts under jockey Brian Hernandez. The English Channel gelding rallied to a professional three-quarter length debut win, advancing inside rivals on the turn and splitting the leaders in the final furlong to capture a one-mile maiden special weight over firm Ellis Park turf in September.

“He broke mid-pack and had a nice turn-of-foot at the end,” DeVaux said. “He ran really well. You never know going long first time if they’re going to need a race or not, so I was really pleased with him. He had always trained well, so it wasn’t a huge surprise.”

Monition followed by demonstrating a new dimension, posting a gate-to-wire score when stretched out to nine-furlongs over good going against older allowance company on October 9 at Keeneland.

“Brian made the decision. He saw there wasn’t a lot of speed on paper and knew the horse could break sharp,” DeVaux said. “When he made the lead, he made the right decision and let the horse stay comfortable there. It was quite impressive.”

Monition has breezed back five times at Keeneland, including a half-mile in 48.60 seconds on November 16. He will make his Big A debut under jockey Luis Saez from the outermost post 8.

DeVaux said Saez will have plenty of options with the versatile Monition.

“It’s going to be up to Luis to play the break and see. If no one is going to go, it’s definitely in his wheelhouse to do so,” DeVaux said.

The Bodemeister colt enters from starts in the first and third legs of the prestigious Canadian series at Woodbine Racetrack, having won the 162nd running of the $1 million Queen’s Plate at 10 furlongs on Tapeta in August ahead of an eighth-place effort in the 12-furlong Breeders’ over yielding turf in October.

Safe Conduct, who sports a ledger of 8-3-1-0 with field-high purse earnings of $606,364, won a 1 1/16-mile optional-claimer over firm Belmont turf in May by 2 1/2-lengths in besting Public Sector, who has since developed into a multiple graded stakes winner.

Safe Conduct exited that effort to finish fourth in the off-the-turf Grade 3 Pennine Ridge in May and faded to eighth in the Grade 1 Belmont Derby Invitational in July over good going ahead of his Queen’s Plate run.

The talented bay, bred in Ontario by Mitchell Kursner, breezed five-eighths in 1:02.25 November 7 over the Belmont inner turf and followed with an easy five-eighths over Big Sandy in 1:03.86 on November 18.

Jose Lezcano, aboard for the win at Belmont in May, has the call from post 7.

The Kentucky-bred bay made his first two career starts last November at the Big A, winning a six-furlong maiden special weight ahead of a gate-to-wire score in the 1 1/16-mile Central Park.

Never Surprised has made his three sophomore starts in graded company, finishing second in each of the one-mile Grade 3 Kitten’s Joy in January at Gulfstream Park, the 1 1/16-mile Grade 3 Saranac in September at Saratoga and the nine-furlong Grade 2 Hill Prince in October at Belmont. The latter two efforts were both won by Public Sector.

He worked a half-mile in 50.35 on November 19 over the Belmont dirt training track.

“He’s training forwardly like he always does. He’s a very eager horse in the mornings and he’s a little bit that way in his races,” Pletcher said. “Hopefully, he can repeat his form here – he’s 2-for-2 at Aqueduct and seems to like the course. Kendrick [Carmouche] has certainly had some success with him.”

Kendrick Carmouche, aboard for both wins and the last-out Hill Prince, retains the mount from post 6.

He exited that effort to finish off-the-board in the NYSSS Cab Calloway in July at Saratoga but made amends with a rallying nose score in an open 1 1/16-mile optional-claiming test ahead of the Carle Place.

Dylan Davis, who has piloted the colt in his last two starts, retains the mount from post 5.

Rounding out the field are Kygo [post 1, Manny Franco], a formerly French-based son of Adlerflug making his North American debut for trainer Mike Maker; the graded-stakes placed Original [post 3, Javier Castellano], who captured the one-mile Manila in July at Belmont for trainer John Terranova; and the Irish-bred Gussy Mac [post 2, Jorge Vargas, Jr.], who removes blinkers in search of his first win in North America for trainer Niall Saville. Boldish was entered for the main-track only.