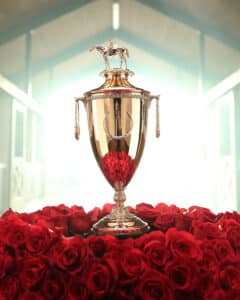 (The Kentucky Derby trophy and roses won’t be on display this Saturday, but Aqueduct does have the “Garland of Roses” Stakes / Coady Photography)

Glass Ceiling will look to secure her first stakes win in Saturday’s $100,000 Garland of Roses, a six-furlong sprint for fillies and mares 3-years-old and up at Aqueduct Racetrack.

Trained and co-owned by Charlton Baker with Michael Foster, the 4-year-old Constitution bay enters from a game second in the faster division of the seven-furlong Pumpkin Pie contested over a sloppy and sealed main track on October 31 at Belmont Park.

With returning rider Dylan Davis up, Glass Ceiling saved ground in fifth position before angling five-wide for the stretch run and closing with a flourish, finishing a head back of pacesetter Lady Rocket, who exited that effort to win the Grade 3 Go for Wand.

Glass Ceiling has kept good company this season, finishing second to Grade 1-winner Bella Sofia in an allowance sprint in July at Belmont. She entered the Pumpkin Pie from a six-length romp in a 6 1/2-furlong allowance sprint on September 30 over Big Sandy.

“She came out of a good race last time. She ran real good that day,” Baker said. “She’s the type of filly that always gives you a big effort and tries hard. Her last two races she’s really stepped up her game.

“She’s training as forward as she had for her last two [starts],” Baker added. “She’s been doing great since Saratoga.”

Baker said he kept an eye on the talented bay through her 3-year-old season in which she posted a record of 10-2-2-3.

“I liked her sire. He’s a young sire and doing well,” Baker said. “As a 3-year-old, she was running [Beyer] figures in the 70s and I thought if she improved as a 4-year-old she could be OK. We’ve seen her improve these last few starts.

“She’s a beautiful filly and has a great body,” Baker added. “I got lucky on a three-way shake, but I was watching her even in her allowance races hoping she might drop down where I could get her.”

Baker said he is hopeful Glass Ceiling can work out a stalking trip behind the speedy Sadie Lady.

“There’s a little speed in there if she can get a good trip,” Baker said.

Listed as the 6-5 morning-line favorite, Glass Ceiling will exit post 2 with Davis aboard.

Royal Currency rallied to finish a distant second to Sue Ellen Mishkin in her August debut sprinting six-furlongs at Saratoga Race Course, finishing a half-length in front of third-place Caragate who won Thursday’s opener at the Big A.

“She came up with a temperature a few days after she ran and I didn’t want to rush her, so we gave her enough time to recover and slowly get her back,” Baker said.

Out of the multiple stakes winning Gold Token mare Gold for the Queen, Royal Currency is a half-sister to the graded-stakes placed Gold for the King, who won five restricted stakes for Baker.

Royal Currency breezed a half-mile in 48.75 seconds from the gate on December 4 over the Belmont dirt training track.

“Her last work was pretty decent. She can run,” Baker said. “She’s coming off a layoff, but she has a lot of ability. She’s doing well.”

Listed at 5-1 on the morning-line, Royal Currency will exit post 2 with Jose Lezcano aboard.

Baker said Honor Way, who finished a distant fifth in Saturday’s Grade 3 Go for Wand, will be sold at the Keeneland January Horses of All Ages sale.

The 7-year-old Kentucky-bred daughter of Caleb’s Posse enjoyed a solid 2020 campaign for Baker posting a record of 10-4-3-2, including wins in the Pumpkin Pie at Belmont and the Garland of Roses at the Big A.

“She’s a blue collar hard-knocking filly,” Baker said. “She was very honest and consistently trying and a nice filly to have in the barn. She’s a filly you like because she always tries.”

The 4-year-old daughter of Munnings was an impressive winner of the Empire Distaff against fellow state-breds on October 31 at Belmont, but failed to fire after tracking four-wide in fourth having exited the outermost post 6 in Saturday’s one-turn mile.

DePaz said Sharp Starr was hampered by a wide trip in a race won by the Brad Cox-conditioned Lady Rocket under a heady ride by Irad Ortiz, Jr.

“It was a tough race. We thought being outside we could see how the race develops after the break,” DePaz said. “We didn’t want to be so far back against that filly of Brad’s, who we figured would be on the front end. But Irad rode the race really smart and floated everybody out. She [Sharp Starr] lost a lot of ground through the race and it probably cost her for third.”

DePaz said he will nominate to – but not necessarily enter – a number of upcoming stakes races, including the seven-furlong La Verdad for older state-bred fillies and mares on January 2. Sharp Starr finished second in last year’s La Verdad.

“She came out of it well, but I’m not sure yet,” DePaz said. “Considering we ran back off that big race at Belmont, coming back maybe she needs a bit more spacing between races to get her best effort. I’ll nominate and see how she’s doing. I’m not in a rush. We know she has some big races in her and it’s just a matter of having her peak at the right time.”

DePaz will unveil Celine the Queen, a 2-year-old daughter of Union Jackson, in Race 5 on Saturday at the Big A – a six-furlong maiden special weight for state-bred juvenile fillies.

Celine the Queen has posted a pair of sharp half-mile works from the gate over the Belmont dirt training track, including a 47.63 effort on November 27 which was the second best recorded time of 157 works at the distance.

“She’s training very well – very forward. She’s a first-time starter but everything she’s done, she’s done it with ease,” DePaz said. “She gallops out well, too. I’m looking forward to getting her started.”

Bred in New York by Sequel Stallions and Lakland Farm, Celine the Queen, out of the Pioneerof the Nile mare Explicable, was purchased for $180,000 at the Fasig-Tipton Midlantic 2-Year-Olds in Training Sale.