Aqueduct Barn Notes: Glass Ceiling May Be On Tap For Interborough Stakes Next

Aqueduct Barn Notes: Glass Ceiling May Be On Tap For Interborough Stakes Next 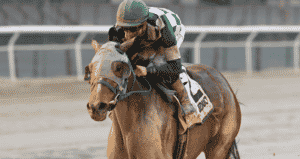 Glass Ceiling earned an 88 Beyer Speed Figure with a 2 1/4-length victory in Saturday’s $100,000 Garland of Roses, a six-furlong sprint for fillies and mares 3-years-old and up at Aqueduct Racetrack.

Glass Ceiling settled at the rear of the seven-horse field down the backstretch and swung wide nearing the quarter pole in pursuit of pacesetter Sadie Lady. Under Dylan Davis’ right-handed encouragement, Glass Ceiling was in command outside the final furlong marker, covering the six furlongs in 1:11.19 over the sloppy and sealed main track.

Prior to Saturday’s victory, the now five-time winner was a late-closing second to Lady Rocket in one of two divisions of the Pumpkin Pie on October 31 at Belmont Park, where she earned a career-best 94 Beyer.

“She came out of it great. She ate up well like she always does,” Baker said. “She gets more relaxed going seven-eighths. She doesn’t need to be rushed off her feet, so that’s more beneficial than three-quarters.”

Baker said another sharp effort in the Interborough would likely result in a start in the Grade 3, $250,000 Barbara Fritchie on February 19 at Laurel Park.

“That’s the plan. After her next start, we might go to Laurel and then give her some time off,” Baker said.

Glass Ceiling earned her first three victories while racing for trainer Danny Gargan during her sophomore campaign. After passing through the hands of several other trainers, she was claimed by Baker for $40,000 in May. She ended a 15-race slump in her fourth start for Baker with a six-length triumph in a first level allowance tilt in September at Belmont Park three starts back.

Baker said her speed figures and pedigree were enticing.

“I bred a mare to Constitution early on and I always believed in him as a stallion,” Baker said. “She was decent enough at three so I figured she could be competitive at four. I was just looking for a young horse that can get better and improve as an older horse and she’s done that. During the wintertime up here, you can be competitive if you can run numbers in the low-to-mid 80s. She ran some numbers in the 90s a couple of times, so she’s exceeded my expectations.”

Glass Ceiling, bred in Kentucky by Twin Creeks Farm is out of the stakes-placed Empire Maker mare Fighter Wing, whose dam was two-time graded stakes winner Lakenheath. Glass Ceiling boasts a consistent record of 23-5-6-4 with earnings of $332,612.

Wondrwherecraigis works in preparation for Gravesend

Trainer Brittany Russell worked Grade 3-winning sprinter WondrwherecraigisSaturday in his final drill for next Sunday’s $100,000 Gravesend, a six-furlong handicap for 3-year-olds and up at the Big A.

“He is training along really well and as long as he comes out of that work well, all systems are go for the Gravesend,” Russell said. “He’s really straightforward and we try and keep him happy. It’s more or less just maintenance and he’s ready to go.”

Hoping to extend his career-best form to Aqueduct when he runs at the Big A for the first time next weekend, Wondrwherecraigis was a driving winner of the Grade 3 Bold Ruler Handicap at Belmont Park last out on October 31.

The Bold Ruler was the first graded victory for the Michael Dubb and Elkstone Group-owned gelding, who crossed the finish line first in the Grade 3 Frank J. De Francis Memorial Dash at Laurel in September, but was disqualified and placed behind runner-up Jalen Journey for interference in the stretch.

“He knows his job and we know he’s fast,” said Russell. “We just hold him together and keep him happy. He does his thing in the morning and he’s a smart horse. In the afternoon he does tend to do a little drifting, but hopefully all that is behind us now.”

His latest work is his second at Pimlico after moving from Laurel Park as the dirt surface there undergoes renovation. Russell says the move has not bothered the dark bay.

“I have stalls at Pimlico so he joined us over there and hasn’t missed a beat. I think he actually liked the change of scenery,” Russell said with a laugh.

Genevieve Londono will be crossing her fingers for the biggest win of her career when juvenile Stirdatpot starts in Saturday’s NYSSS Great White Way. Contested at six furlongs over Aqueduct’s main track, the Great White Way offers a purse of $500,000 as part of the New York Stallion Stakes Series for eligible state-sired 2-year-olds.

Londono, who left a career as a vet tech to pursue training, has a long history in the equine world – her father was a rider and her mother runs a breeding operation. After starting her training ventures as an assistant to Wayne Catalano, Mike Maker, Michael Trombetta, and a few others, Londono went out on her own five years ago.

Londono, based at Churchill Downs, currently trains five horses and exercises them in the mornings, preferring to be hands on with each of her trainees. Starters for Londono have finished on the board at a 51 percent clip for a career record of 96-14-18-17 and nearly $600,000 in earnings.

Cash Logistics, a gelding by Unbridled Express, is the top performer from Londono’s barn, awarding Londono the first stakes victory of her career when he won Indiana Grand’s Sagamore Sired in 2020.

Stirdatpot, who finished second on debut at Churchill last time out sprinting 5 1/2-furlongs over a muddy track on November 14, will be the second stakes starter for Londono.

Bred in Florida by Londono and co-owner Charlie Hancock, Stirdatpot is a son of 2012 Breeders’ Cup Sprint winner Trinniberg, who stood in the Empire State for five seasons.

As a registered Florida-bred with a qualifying New York sire, Stirdatpot is eligible for a wide array of conditions in both Florida and New York, an opportunity Londono says she would not have in many jurisdictions.

“We chose to nominate to the Stallion Series to give us some options going forward,” Londono said. “The purse is great and we know the kind of competition we are getting into.”

Now with Stirdatpot awaiting a run at the biggest race of her career, Londono said she is eager to see how the colt stands up against fellow New York-sired competition.

“It’ definitely nerve-wracking,” said Londono. “But I’m excited for it. This would be huge to win. He showed enough in his first start to make me think he’ll do well here. I’m having the best year of my career so far and I hope we can continue that in this spot.”

Unique Unions tunes up for NYSSS Great White Way; A Bit o’Irish Sass back in training for Schosberg

The Union Jackson gelding breezed a half-mile in 50.08 seconds over the Belmont dirt training track.

“It was hard to see because it was so foggy, but he did fine,” Schosberg said. “He doesn’t need a whole lot coming off of his last race and I’m very pleased with the way he’s coming along.”

Entering the Great White Way off a six-furlong state-bred maiden special weight victory on November 20 at Aqueduct, Schosberg said the gelding is ready for stakes company.

“We always thought he was a real quality horse and he’s proving it,” said Schosberg. “He’s got a wonderful personality and a good way of going. He stays low to the ground and I was impressed with his maiden victory.”

Unique Union’s owners and Schosberg earned a stakes victory this year when A Bit o’Irish Sass won the New York Oaks at Finger Lakes Racetrack in July, geared down and 4 1/2-lengths clear of runner-up U Guys Are No Fun.

The 3-year-old daughter of Laoban made her next in start in the Fleet Indian at Saratoga on August 27, finishing a non-threatening fourth in the field of six. Away from the track since the Fleet Indian, Schosberg said the filly is making steady progress back to the races.

“She had a little issue after her last start and she just needed some time,” said Schosberg. “I was hoping I would have her back in time for the [NYSSS Staten Island] last weekend, but she needed more time. She’s coming back to the barn from the farm [Saturday] and we are looking forward to having her back.”

Bossmakinbossmoves, a 2-year-old gelded son of Laoban, most recently finished fifth in a 6 ½-furlong state-bred maiden special weight at Aqueduct on December 5 after a pair of runner-up efforts earlier this year at Belmont.

Schosberg said the gelding could be a special one going forward.

“I was going to run him in the Great White Way also because he’s eligible, but that race is going to be too short for him and he wants to stretch out,” Schosberg said. “He’s going to be a nice horse, he just needs to cover some ground. He ran a good race last out, but I didn’t want to run him in a stakes.”

Schosberg also serves as the president of the New York Thoroughbred Horsemen’s Association’s Take The Lead program, which helps to facilitate the transition of racehorses from the track to new homes in retirement. Now in its eighth year, Schosberg says the program is continuing to see strong support.

“We are approaching our 900th horse [through the program] very rapidly,” said Schosberg. “At the moment, I have 12 horses who are transitioning off the track. At any time of the week, we have anywhere from five to 10 horses on our list in different phases of transition. We are very busy and have horses leaving for retirement all the time.”