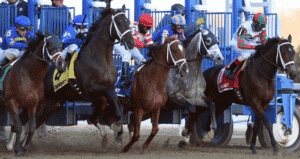 Canadian-bred graded stakes-winner God of Love will look to transfer his good form from Tapeta to dirt when he ships to Aqueduct Racetrack for the Grade 3, $250,000 Withers on February 5.

The nine-furlong test for 3-year-olds is the next local prep on the Road to the Kentucky Derby, awarding the top-four finishers 10-4-2-1 qualifying points toward the Grade 1, $3 million Kentucky Derby on May 7 at Churchill Downs.

Eclipse Thoroughbreds and Gary Barber’s God of Love, trained by Hall of Famer Mark Casse, is already a stakes winner over turf and Tapeta in only four starts. Two starts after capturing the Cup and Saucer in October on the Woodbine turf, the chestnut colt provided his young sire Cupid with a first graded stakes winner when taking the 1 1/16-mile Grade 3 Grey on November 28 on the Woodbine Tapeta.

“He’s a pretty good horse. If he can have the same type of form on dirt that he does on the synthetic, he’ll be a force. In his last race, he ran a 4.5 Thorograph number, which puts you right there,” Casse said.

One start prior to the Grey, God of Love finished a troubled fifth in the nine-furlong Coronation Futurity on the Woodbine Tapeta after having to steady several times.

“He was the favorite in his start before the Grey and I awarded him worst trip of the year of any horse I ran last year,” Casse said. “It was a terrible, terrible trip. He checked about three or four times.”

God of Love joined Casse’s winter division at Palm Meadows Training Center in Florida, where he has worked three times since the Grey. The Withers will be God of Love’s first race outside of his native Canada.

“I think he’ll end up being champion 2-year-old in Canada. The reason I sent him to Toronto was because he was a Canadian-bred,” Casse said.

Bred in Ontario by William D. Graham, God of Love is out of the Three Wonders mare No Wonder, a half-sister to Grade 1-winner Weemissfrankie, who also produced Canadian-bred stakes-winner Muskoka Wonder.

God of Love was a $100,000 purchase at the OBS March Sale, where he was consigned by Golden Thoroughbreds Training and Sales.

Other probable candidates for the Withers include Courvoisier, Smarten Up and Cooke Creek – the top-three finishers of the Jerome – as well as January 2 maiden winner Constitutionlawyer.

Michael Dubb’s Chateau, last-out winner of the six-furlong Gravesend on December 19 at Aqueduct, worked a half-mile Thursday in 51.72 seconds over the Belmont dirt training track.

Trainer Rob Atras said the 7-year-old Flat Out gelding is working towards a title defense in the Grade 3, $200,000 Tom Fool Handicap, a six-furlong test for 4-year-olds and up slated for March 5 at the Big A.

“We’re still considering a few different things, but right now the goal is the Tom Fool,” Atras said. “I don’t know if he’ll have a prep or not. It was only his first work back today, too.”

“He’s been solid,” Atras said. “Every time he comes out and runs his race. He’s been very nice to have.”

The Mission Impazible homebred, out of the Seeking the Gold mare Stirring, overcame a troubled start and closed from last-of-12 to finish third in his December 5 debut sprinting 6 1/2-furlongs at Aqueduct.

Last out, in a six-furlong state-bred maiden special weight on New Year’s Day at the Big A, Impressionist exited the inside post under Kendrick Carmouche and made every pole a winning one. The romping 8 1/2-length score over a sloppy and sealed main track garnered an 82 Beyer.

“The first race served as a schooling type race. He took a lot of dirt, made a middle move and closed a lot of ground,” Atras said. “Going into that race I liked him and even afterwards I thought he was still going to be a nice horse down the road.

“He really ran well the other day,” Atras added. “He drew the inside and he showed that he’s got that speed that he can be on the front, if he needs to be.”

Atras said he will nominate Impressionist to the $100,000 Gander, a one-turn mile for state-bred sophomores on February 12 at Aqueduct.

“We don’t have a spot picked out for him yet, but we’ll nominate him to the Gander,” Atras said. “There was a spot next week that would fit him pretty good – a seven-eighths state-bred allowance – but it’s coming up a bit too quick. I’d like to breeze him a couple times and see where he’s at and then decide what we’re going to do.”

Impressionist is a half-sibling to the multiple graded stakes placed Conquest Mo Money, who was runner-up in both the 2017 Grade 3 Sunland Derby and Grade 1 Arkansas Derby.

Atras said Dennis Narlinger’s graded stakes placed Sadie Lady will also breeze Friday with an eye towards the $100,000 Broadway, a six-furlong sprint for older state-bred fillies and mares on February 12 at Aqueduct.

Sadie Lady has made her last two starts over sloppy and sealed main tracks finishing fourth on both occasions, including the 6 1/2-furlong Union Avenue in August at the Spa and last out in the Garland of Roses, a six-furlong sprint on December 11 at the Big A.

“I hate to make excuses, but she just doesn’t run her top races on a sloppy track,” Atras said. “It’s disappointing, but we’ll point here to the Broadway and hope for a dry track.”

Atras is tied for first in the Big A winter meet trainer standings with eight wins heading into Thursday’s card. He will send out a pair of formidable contenders Friday in Storm Shooter and Seven Lilies.

Owned by MyRacehorse, Storm Shooter, a 4-year-old son of Twirling Candy, will exit post 4 under Carmouche in Race 5, a six-furlong state-bred allowance.

A half-sibling to multiple graded stakes placed Orinoquia, Storm Shooter is out of the Storm Boot mare Nice Boots Baby, who won the 2002 Ruthless at Aqueduct.

Previously trained by Hall of Famer Todd Pletcher, Storm Shooter graduated at second asking sprinting six-furlongs in an off-the-turf maiden sprint in October at Belmont. Last seen finishing third in February in a state-bred optional-claimer at the Big A, Storm Shooter joined the Atras barn in the fall.

Storm Shooter worked a half-mile in 51.94 January 9 over the Belmont dirt training track.

“We had to space him out the past couple works because of the weather, but he acts like he’s a pretty nice horse,” Atras said. “He has a lot of speed and ability. We’re hoping he runs well tomorrow. He may need one race.”

Atras said he appreciates the opportunity to train for MyRacehorse.

“They buy some nicely bred horses. I’m hoping I can get lucky for them,” Atras said.

Windylea Farm’s Seven Lilies will exit the inside post under Dylan Davis in Race 8 on Friday, a one-turn mile allowance optional claimer for older state-bred horses.

Last out, the 7-year-old Rattlesnake Bridge gelding stretched out to one mile on December 17 at the Big A and finished a game second, defeated a head by returning rival Yankee Division and six lengths clear of third-place finisher Prince of Pharoahs, who is also entered back.

“It was a really strong number,” Atras said. “I thought it was a great effort. He finished up really good. It was a question mark going a mile if he would show that kick he had going six furlongs. Obviously, he did. He just needs to work out a trip Friday.”

Leeloo steps up to the plate for $100K Franklin Square

One of two daughters of Practical Joke in the field, Leeloo was sixth at first asking behind fellow Franklin Square aspirant Sterling Silver over a fast main track at the Big A on November 21.

“She’s improved off her first run and got it all together the second time,” Duggan said. “Albeit it was on a wet track, but I think she should handle most tracks. She’s been training great and the placement of the race fits perfectly. She put in some decent works prior to her first start, and she made a couple of minor mistakes, but she progressed nicely from it. Sometimes, getting two swings at it is a blessing in disguise and as you can see, she progressed nicely.”

Leeloo will see some extra added ground for Saturday’s engagement, with her first two starts taking place at six furlongs.

“Right now, the extra half-furlong is a good safety net,” Duggan said. “She looks like a sprinter and acts like a sprinter. Maybe we’ll try a one-turn mile down the road, but we’re not looking to rush her into two turns any time soon.”

Leeloo, bred by Sequel Stallions NY and Stonestreet Thoroughbred Holdings, was bought for $150,000 out of the 2020 Keeneland January Sale and is out of the Elusive Quality mare Ribbon Cutter. She comes from the same family as multiple Grade 1-winner McKinzie.

0
0
The Pressbox · 2 hours ago
@thepressboxlts
Ellis Park's Own Could Have Shot at This Year's Groupie Doll Stakes - https://t.co/atuLUmEYzb https://t.co/M2R5uyTu8s
View on Twitter