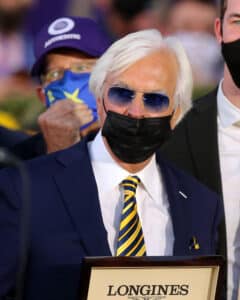 Topping the list of nominees for Baffert to the Capote is Murray, an impressive first out winner before disappointing as the favorite in the Grade I Del Mar Futurity Sept. 6.

A $300,000 purchase at the Keeneland September sale last year owned by a partnership that includes SF Racing LLC and Starlight Racing, Murray broke his maiden by 10 ¾ lengths July 25 before finishing fifth of six in the Futurity. The son of Street Sense and the Tiznow mare Now Now has banked $48,000.

Baffert also nominated Montebello, a New York bred son of Curlin who won narrowly in his debut Aug. 7 at Del Mar before finishing second in the Funny Cide at Saratoga 20 days later, and the maidens Rhetoric and Enbarr.

The other nominees include Los Alamitos graduates Olympic Legend and Richards the Dream and Fascinated, who won at first asking – via disqualification – on the Golden Gate Fields turf Sept. 4.

Baffert, who won the inaugural Los Alamitos Special – when it was contested at 1 ¼ miles – with Dabster in 2018, nominated Leading Score and Magic On Tap this year..

A lightly-raced 7-year-old, Leading Score owns a victory at Los Alamitos, capturing an optional claimer at one mile during the 2017 Los Angeles County Fair meet.

Owned by breeders Patti and Hal Earnhardt III, the son of Midnight Lute has won three of 10 and earned $141,810.

Magic On Tap will be shortening up for breeder Summer Wind Equine LLC after trailing in the Grade I Pacific Classic at 10 furlongs last month. The 5-year-old Tapit horse has won three of eight and banked $234,300.

The other noms to the Los Alamitos Special are Bold Endeavor, Border Town, Luvluv, Manhattan Up, Margot’s Boy, Red Storm Risen and Sash.

Entries for the Capote will be taken Wednesday, Sept. 18 and for the Los Alamitos Special the following day.