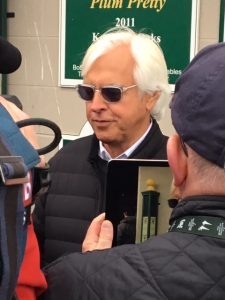 Trainer Bob Baffert and one of his top young horses are soon to be back in Arkansas. On Saturday, the 3YO colt Newgrange — who is a perfect 2-for-2 so far — will be entered to run in the G3, $750,000 Southwest Stakes, which is one of the track’s major preps for the annual trek to the Triple Crown.

Newgrange, like all Baffert horses, is ineligible for Kentucky Derby qualifying points because of a Churchill Downs suspension, stemming from a possible medication violation involving his 2021 Kentucky Derby winner Medina Spirit.

“Glad to be running at Oaklawn again,” Baffert said in a text message Tuesday night. “I think he’s a nice horse. Training well.”

The 1 1/16-mile Southwest will mark the first start outside California for Newgrange, who exits a front-running victory in the $100,000 Sham Stakes (G3) at 1 mile Jan. 1 at Santa Anita. Oaklawn conducted its first Kentucky Derby points race New Year’s Day, with the Kenny McPeek-trained Dash Attack splashing home to a two-length victory in the $250,000 Smarty Jones at 1 mile.

Six other Smarty Jones starters are entered in the Southwest, which goes as the ninth of 11 races. Racing begins Saturday at 12:02 p.m. (Central), with probable post for the Southwest 4:22 p.m.

The Kentucky Derby is limited to 20 starters, with starting preference given to horses with the highest point totals earned in designated races like the Smarty Jones and the Southwest, which also offers 17 to the four finishers (10-4-2-1).

Dash Attack is also 2 for 2, breaking his maiden Dec. 5 at Oaklawn and returning to win the Smarty Jones in his first start against winners. Both of Dash Attack’s victories have come at 1 mile and over an off track.

“It looks like a good next spot for him,” McPeek said. “Baffert’s horse coming in from California, obviously, looks like he’s got a lot of raw talent. There’s some others in there that have run well. Look, it’s never easy, but our colt’s doing good.”

Barber Road is seeking his first stakes victory after also finishing second in the $200,000 Lively Shively Nov. 27 at Churchill Downs to conclude his 2-year-old campaign. The speedy Barber Road, who was farther back than expected in the Smarty Jones, switches to eight-time Oaklawn riding champion Ricardo Santana Jr. after regular rider Reylu Gutierrez picked up the mount on Chess Chief for the $3 million Pegasus World Cup Invitational Stakes (G1) Saturday at Gulfstream Park.

“We’ve competed against them and know where we stand,” said John Ortiz, who trains Barber Road for former Walmart executive William Simon. “I think the horse has improved since (the Smarty Jones), and I think with the added distance he’s going to improve more. We’ll just let him come out of the gate and put Ricardo in a good spot and just go from there. With a fast track, I expect him to be a little closer and more involved.”

Hall of Fame trainer D. Wayne Lukas produced an upset in the 1992 Southwest with Big Sur, who wired a field that included two future Triple Crown race winners in Lil E. Tee (Kentucky Derby) and Pine Bluff (Preakness). Lukas bids for his second Southwest victory with Ignitis, who was beaten three lengths in the Smarty Jones at odds of 31-1.

“I think he earned the right to run in this next race in the 3-year-old series,” Lukas said. “He finished up. He’s still a little bit green. He still hasn’t learned exactly all the little things we’d liked to have a 3-year-old learn, but that’s true of so many of them at this time of year. We’re going to evaluate him. We’re going to run him in there and hope for an improved race. He finished really strong the other day, so maybe the mile and a sixteenth will help him a little bit, too.”

New shooters include Osbourne for trainer Ron Moquett of Hot Springs and Costa Terra for Hall of Fame trainer Steve Asmussen, a three-time Southwest winner. Osbourne will be making his 3-year-old debut after passing the Smarty Jones in favor of the $400,000 Springboard Mile Stakes Dec. 17 at Remington Park. A gelded son of Asmussen’s 2014 Southwest winner Tapiture, Osbourne finished second, beaten a half-length, in the Springboard Mile.

“I like our chances,” said Moquett, who won the 2015 Southwest with Far Right. “I think it’s a good shot to see where we’re at. There are some nice horses in here, obviously. You hang $750,000 up and there’s going to be some people show up wanting it.”

Costa Terra, a homebred son of 2017 Horse of the Year Gun Runner for Winchell Thoroughbreds (Ron and Joan Winchell), hasn’t started since finishing fifth in the $500,000 Breeders’ Futurity (G1) Oct. 9 at Keeneland. Costa Terra is a half-brother to Pneumatic, who won his first two career starts at the 2020 Oaklawn meeting for Asmussen and the Winchells before running fourth in the Belmont Stakes later that year.

“He’s always shown some talent,” longtime Winchell racing/farm manager David Fiske said of Costa Terra. “I thought he ran well in the Breeders’ Futurity, just, obviously, not well enough. He was another guy that was kind of down the depth chart behind some of the other 2-year-olds that we had last year, but he seems to be picking it up since the calendar turned.”

Late-running Vivar adds blinkers for trainer Brad Cox after being beaten only 3 ¼ lengths in the Smarty Jones. Vivar, a homebred for John Ed Anthony of Hot Springs, broke his maiden at a mile on the turf Sept. 5 at Kentucky Downs and was a first-level off-the-turf allowance winner at 1 1/16 miles Oct. 29 at Keeneland.

“Vivar should be better with a little more stretch,” said Cox, who won last year’s Southwest with champion Essential Quality.

Call Me Jamal and Classic Moment, another Asmussen trainee, remove Lasix because the anti-bleeder medication is banned from Kentucky Derby points races. Classic Moment adds blinkers following a fourth-place finish in the Springboard Mile. Call Me Jamal broke his maiden Dec. 18 at Oaklawn in his two-turn debut for trainer Mike Puhich.

Normally run in late February, the Southwest will be contested in January for the first time. All of Oaklawn’s 2022 Kentucky Derby points races were moved up on the calendar in conjunction with its earliest in history (Dec. 3). The Arkansas Derby, April 2, falls five weeks before the Kentucky Derby. It had been three weeks since 1996.

“It’s a little odd,” Moquett said. “But once you get into it, it’s just like anything else. You’re just looking at the day in front of you. Later, you might think about that stuff. But right now, we’re just thinking about how do we get through the next couple of days of training to get into the paddock and the gates and let’s go.”

The Southwest was inaugurated in 1968.

Sign Up
The Pressbox · 6 hours ago
@thepressboxlts
Churchill Downs had nearly 50,000 on “Thurby!” Had over 100,000 attendance on Oaks Day. Had about 160,000 on Derby Day. How does that compare with any other venue? Just asking. @DerbyMedia @HorseRacingKK @EJXD2 @Gary_McIntyre56 @Smac300842 @DRFMcGee @DRFPrivman @kyholmarie
View on Twitter
1
6
The Pressbox · 12 hours ago
@thepressboxlts
Golden Pal Works at Keeneland in Preparation for Royal Ascot - https://t.co/IwkU4F7oAj https://t.co/9XUNhVcqZX
View on Twitter