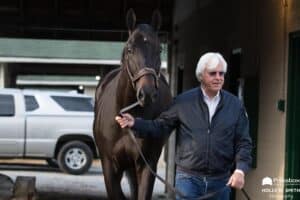 A hearing by the Kentucky Horse Racing Commission in the case of former and disqualified Kentucky Derby winner Medina Spirit — that was scheduled to begin on June 28 — has been moved to Aug. 22.

The case sought by attorneys for the embattled and suspended trainer Bob Baffert is an appeal of the Kentucky Stewards’ decision to disqualify the horse from the race and to both suspend and fine Baffert, after the horse failed a post-race drug examination and test following the 2021 running of the Kentucky Derby. Baffert was suspended for a total of 90 days and fined $7,500.

According to multiple reports and Craig Robertson, one of Baffert’s attorneys, the postponement was a “mutuel decision by all sides.”

The suspension is scheduled to conclude in early July, and it is expected that some racing jurisdictions will automatically allow the trainer access to both racing facilities and the ability to train horses once again. During the suspension, all of Baffert’s horses were transferred to California-based trainers Sean McCarthy and Tim Yakteen.

Churchill Downs, on the other hand, has issued a two-year ban that prohibits Baffert from entering horses and access to its’ grounds until mid-2023. That ban is currently being litigated, in the court system.

When the Kentucky Horse Racing Commission finally does hear the case, now scheduled for August, there is expected to be lots of testimony in and around the urine sample that was studied following the race. Both the original and split blood samples both revealed an excessive amount of the drug betamethasone in the horse’s system following the 2021 Kentucky Derby.