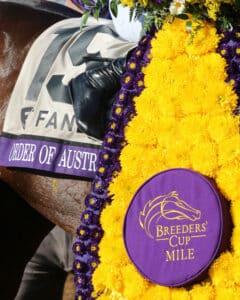 At its meeting last night, the Breeders’ Cup Board of Directors unanimously elected Barbara Banke as Board Chairman. Owner of Stonestreet Farms in Lexington, Ky., Banke becomes the first woman to Chair Breeders’ Cup Limited. She succeeds Fred Hertrich III, who served as Chairman from 2017 until yesterday.

“I also congratulate our new Vice Chairman Antony Beck and greatly look forward to working together closely. In addition, I extend my warmest thanks to Fred Hertrich, who provided the Breeders’ Cup with outstanding leadership throughout his tenure as Chairman. Fred’s vision was key to several successful strategic initiatives over the last few years, including advancements in equine safety and integrity efforts, innovative approaches to improving the fan experience and the successful running of the 2020 World Championships amid the COVID-19 pandemic.

“As Chairman, I look forward to working closely with stakeholders across the industry to ensure a bright future for Breeders’ Cup Limited, the World Championships and the sport of Thoroughbred racing.”

Banke has enjoyed successful careers as a lawyer and international vintner, and as a leading owner and commercial breeder. Under her direction, Stonestreet has bred and raised horses that have won more than 120 Graded and listed stakes races. Among their stars have been Curlin, the two-time Horse of the Year and 2007 Breeders’ Cup Classic (G1) and 2008 Dubai World Cup (G1) winner; and Rachel Alexandra, who became the first filly to win the Preakness Stakes (G1) in 85 years and was also named 2009 Horse of the Year.

Banke is a steward of The Jockey Club and a member of the Thoroughbred Owners and Breeders Association (TOBA), the National Racing Museum and Hall of Fame, and Keeneland’s Advisory Board of Directors. Banke has also been a strong proponent of industry safety initiatives, including the Thoroughbred Safety Coalition and the passage of the Horseracing Integrity and Safety Act (HISA) in 2020.

A well-known philanthropist, Banke is a passionate advocate for children’s and educational charities around the country. Most recently she was the Chair of the Sonoma County Wine Auction raising a record breaking $5.2 million for the local community. In addition, Banke and her family contributed $500,000 to help launch the Family Justice Center Sonoma County, assisting victims of domestic violence. She is also a global ambassador for the Susan G. Komen Breast Cancer Foundation.

“The Directors have made a very wise choice in electing Barbara Banke as the next Chair of the Breeders’ Cup,” said Hertrich. “In her service as a Member and a Director, Barbara has instituted bold and innovative approaches to help strengthen and enhance the stature of the  Breeders’ Cup as ‘the best of the best.’ On a personal note, I have immensely enjoyed working with our industry stakeholders, our Members and fellow Directors during my four years as Chairman.”

During his time as Chairman, Hertrich led the company through a dynamic period of change and positive developments for the World Championships and the Thoroughbred industry at large.

Under Hertrich, Breeders’ Cup took a leading role in advancing equine safety and integrity efforts across the industry. As a founding member of the Thoroughbred Safety Coalition, Breeders’ Cup implemented a ban on all race-day medications from the World Championships. Hertrich also led Breeders’ Cup’s strong support of the passage of the Horseracing Integrity and Safety Act (HISA) by Congress in 2020. The bill, which will go into full effect in 2022, requires a uniform anti-doping and medication control program, developed and enforced by the independent Horseracing Integrity and Safety Authority.

Breeders’ Cup also set wagering and overall handle records during Hertrich’s term. The highest all-sources handle in Breeders’ Cup history ($174,628,986) was set in 2019 and record on-track Breeders’ Cup handle ($24,181,317) was set at Del Mar in 2017. The 2020 Breeders’ Cup was also the most expansive and innovative broadcast in its history, as jockey cams brought fans right into race action, and viewers had access to any one of up to 14 horses per race on individual camera feeds. This year, the Breeders’ Cup expanded its global reach by signing agreements with international broadcasters ITV, Sky Sports Racing and Racing TV, which will deliver unprecedented live television and digital broadcast coverage in the U.K. and Ireland, fitting of this international Championship.

Finally, Hertrich led the company in safely holding the 2020 World Championships at Keeneland amid the COVID-19 pandemic. Hertrich, in conjunction with fellow Directors, made the decision to conduct the event without fans in attendance, worked closely with local and state public health officials and instituted health and safety protocols which allowed the Championships to take place safely despite the circumstances.