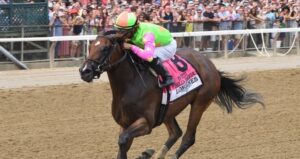 Following a breakthrough triumph against her sophomore counterparts in the Grade 1 Longines Test at Saratoga Race Course, Bella Sofia will face older fillies and mares at stakes level for the first time in Sunday’s 27th running of the Grade 2, $250,000 Gallant Bloom Handicap at 6 ½ furlongs over the Belmont Park main track.

Bella Sofia, a Rudy Rodriguez-trained daughter of Awesome Patriot, has won 3-of-4 lifetime starts by a combined 22 lengths and registered a 101 Beyer Speed Figure for her triumph in the seven-furlong Longines Test on August 7.

The dark bay or brown filly displayed stalking tactics down the backstretch in the Test, establishing command in upper stretch and drawing off to a decisive 4 ¼-length conquest against four graded stakes winners.

Bella Sofia broke her maiden at first asking against older company, winning by 11 ¼-lengths going six furlongs on May 6 at Belmont Park. She won a first-level allowance against elders at the same distance and track on July 11 by 6 ½ lengths. Her lone defeat was a runner-up effort in the June 6 Jersey Girl over Big Sandy.

Rodriguez said he considered two-turn options out of town for Bella Sofia, but decided the Gallant Bloom was the best spot given the distance and the homefield advantage.

“This was the best race for her coming up,” Rodriguez said. “We could have run her in the Cotillion or gone to the Spinster, but it made more sense for us to run her here at home. We know she likes Belmont. She’s been here all along. We’re just happy she’s coming into the race in good shape.”

“The Test was a huge, huge win for us, because we don’t have these kinds of horses in the barn,” Rodriguez said. “To win a Grade 1 at Saratoga, especially a prestigious race like the Test, everything was amazing. We’re still dreaming.”

Rodriguez said Bella Sofia is not as enthusiastic during morning training as she is on race day in the afternoon.

“We’ve been very, very lucky with her,” Rodriguez said. “She just destroyed the field in her first race. She doesn’t put much into her training in the mornings, but in the afternoon she’s a completely different horse. We just have to keep her happy, stay out of her way and let her do all the talking. She’s still young so there’s still plenty of growing ahead of her.”

Luis Saez, the leading rider at Saratoga this summer, will return to the irons from post 1. Bella Sofia will carry 119 pounds.

Coming off a triumph against fellow Pennsylvania-breds is Don’t Call Me Mary, a winner of three of her last four starts, including a last-out win in the Dr. Teresa Garofalo Memorial on August 23 over a sloppy and sealed track at Parx.

Owned by Stuart Grant’s The Elkstone Group and trained by Hall of Famer Todd Pletcher, the 4-year-old El Padrino chestnut made her lone start at Belmont a winning one, defeating a second-level allowance optional claiming event at the Gallant Bloom distance by 4 ½ lengths over next-out stakes winner Truth Hurts.

In her recent stakes coup, Don’t Call Me Mary handed ultra-consistent Chub Wagon, a five-time stakes-winner, her only loss in ten starts.

“She beat a good filly who was undefeated and came back and won an open company stake after that, so I thought it was a good race,” said Pletcher, who saddled Harmony Lodge to victory in the 2003 Gallant Bloom.

Hall of Famer John Velazquez, a five-time winner of the Gallant Bloom, will ride Don’t Call Me Mary [118 pounds] from post 5.

Godolphin’s Lake Avenue seeks her first graded stakes victory since capturing the Grade 2 Demoiselle in December 2019 for Hall of Famer Bill Mott, a two-time winning trainer of the Gallant Bloom.

The regally-bred Tapit chestnut, out of two-time Grade 1 winner Seventh Street, was a last out second to Gamine in the Grade 1 Ketel One Ballerina, where she finished 1 ¾ lengths behind the defending Champion Female Sprinter.

Winless in five starts during her sophomore season, Lake Avenue recaptured her winning form in her 2021 bow going a one-turn mile against optional claimers at Gulfstream Park en route to a stakes score in the Heavenly Prize Invitational on April 3 at Aqueduct. She added black type later in the year with two second-place finishes in the Grade 3 Bed o’ Roses at Belmont and Grade 2 Honorable Miss at Saratoga.

Frank Fletcher Racing Operations won last year’s Gallant Bloom with Frank’s Rockette and will look to double up with Lady Rocket, a 4-year-old Tale of the Cat filly. Trained by Brad Cox, the four-time winner from eight starts took the Pink Ribbon on August 27 at Charles Town in wire-to-wire fashion in her most recent start.

A winner over four different tracks, Lady Rocket defeated second-level allowance optional claiming company at Churchill Downs prior to her last out win. She made her career debut a winning one travelling 6 ½ furlongs in August 2020 at Saratoga en route to a next-out score against winners in October at Keeneland.

The 7-year-old daughter of Caleb’s Posse racked up two stakes victories on the NYRA circuit following last year’s Gallant Bloom, including a 4 ½-length win in the seven-furlong Pumpkin Pie on November 1 at Belmont, and a 1 1/2-length score in the six-furlong Garland of Roses on December 6 at Aqueduct.

The Gallant Bloom is named in honor of King Ranch’s multiple champion filly, who won 12 straight races, including an unbeaten season in seven starts in 1969 when she was named Champion 3-Year-Old Filly over that year’s Triple Tiara winner Shuvee. Trained by the late Hall of Famer Max Hirsch, Gallant Bloom was named 1968 Champion 2-Year-Old Filly with victories in the Matron and Gardenia, and put together an illustrious sophomore campaign, capturing the Gazelle, Delaware Oaks, Monmouth Oaks, and Spinster. She was inducted to the Hall of Fame in 1977.

The Gallant Bloom is slated as Race 9 on Sunday’s 10-race card, which also features the $150,000 Bertram F. Bongard for New York-bred juveniles travelling seven furlongs over the main track in Race 4. First post is 1 p.m. Eastern.