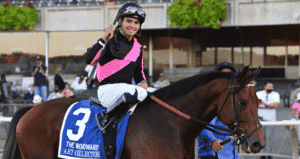 The 4-year-old Bernardini colt, with Luis Saez up, posted splits of 24.02 seconds for the opening quarter-mile and 47.78 for the half-mile with Mo Gotcha tracking from second and mutuel favorite Maxfield saving ground along the rail.

Maxfield and a wide-rallying Dr Post were in position to challenge through the stretch run, but Art Collector would not relinquish securing a 1 1/2-length victory. Art Collector covered the nine-furlongs in 1:49.22, garnering a career-best 107 Beyer Speed Figure.

Maxfield bested Dr Post by a length to complete the exacta with Code of Honor, the 2019 Grade 1 Runhappy Travers winner for Hall of Fame trainer Shug McGaughey, settling for fourth.

Mott praised the improving Art Collector, who has now won a trio of nine-furlong events under his care, including the Alydar on August 6 at Saratoga Race Course and the Grade 2 Charles Town Classic on August 27.

“I would say he beat the best group of horses that he’s beaten so far,” Mott said following Saturday’s win. “They were the most established group. You knew it was a solid bunch. Shug’s horse and Maxfield were good, solid individuals.”

Art Collector launched his career with trainer Tom Drury, posting wins last year in the Grade 2 Blue Grass at Keeneland and the Ellis Park Derby. The talented bay missed the Kentucky Derby due to injury and finished off-the-board in the Grade 1 Preakness and Grade 1 Breeders’ Cup Dirt Mile.

“He had done very well before. He was in good hands. The trainer did very well with him previously,” Mott said. “The fact that I was in New York and he was in Kentucky, I think that’s why they wanted him here. Tommy Drury did a great job with this horse and we’re reaping some of the benefits.”

Mott was also represented in Saturday’s stakes action by Forza Di Oro, who finished fifth in the Woodward; and Chewing Gum, who closed to finish third in the Grade 3 Belmont Turf Sprint Invitational.

“Art Collector ran great. It was a very gutty effort and he did everything right,” Willaford said. “He looked great this morning and is already on his way back up to Saratoga.”

Don Alberto Stable homebred Forza Di Oro, enjoyed a productive summer at Saratoga, registering a 101 Beyer in an optional-claiming win traveling nine-furlongs off a long layoff on July 21. The Speightstown chestnut followed with a pacesetting third in the 10-furlong Grade 1 Jockey Club Gold Cup on September 4.

Willaford said the 4-year-old might appreciate a turn back in distance.

“That’s a thought. We might have to regroup with him,” Willaford said. “It looked like with his win up at Saratoga that he was going to go on, but he is a Speightstown.”

Wachtel Stable, Pantofel Stable and Jerold Zaro’s Chewing Gum has hit the board in all three Belmont starts this year, finishing second in a seven-furlong optional-claimer in his seasonal debut in May ahead of a closing second behind stablemate Casa Creed in the Grade 1 Jackpocket Jaipur on Belmont Stakes Day.

On Saturday, the 6-year-old Candy Ride bay closed from sixth to finish third, 1 3/4-lengths to front-running winner Arrest Me Red.

“He ran hard again. He’s shown up in every race here this year, but he just hasn’t got to the wire first,” Willaford said. “He needs the speed to come back a little bit, but that didn’t happen yesterday.”

Rising star Jack Christopher passed the Grade 1 test with flying colors in Saturday’s $500,000 Champagne, earning a 93 Beyer with a 2 ¾-length win in the one-turn mile for juveniles.

In victory, the chestnut son of Munnings secured a “Win and You’re In” entry to the Grade 1, $2 million Breeders’ Cup Juvenile on November 5 at Del Mar.

“We were obviously very pleased with the race,” said Brown’s Belmont-based assistant Dan Stupp. “He ate up well last night and we’re happy with how he looked this morning.”

Jack Christopher will face a new test going two turns with a start in the Grade 1 Breeders’ Cup Juvenile on November 5 at Del Mar on the horizon.

“The way he was able to relax and rate and with his running style, why not? He didn’t do anything that would stop us from trying. He handled the extra ground very well,” Stupp said.

Earlier on the card, Brown saddled juvenile fillies Kinchen and McKulick to a respective second and third when chasing a leisurely pace in the Grade 2, $200,000 Miss Grillo.

Klaravich Stables’ McKulick earned black type in her first graded stakes attempt following a 1 /16-mile victory at first asking on August 8 over the Mellon turf at Saratoga over stable mate Consumer Spending, who won the Selima at Laurel Park on Saturday.

Still a maiden, Kinchen arrived off a narrow second at maiden level to Hail To, who finished fifth in the Miss Grillo.

“Obviously, we’re disappointed to not get the win,” Stupp said. “The way the race set up and the way the turf was playing they came up short yesterday, but they made good accounts for themselves. They both looked good this morning.”

Arrest Me Red made his first four starts for trainer Arnaud Delacour, including a score in the six-furlong Atlantic Beach in November on the Big A turf.

Transferred to Ward’s care at Keeneland for a sophomore campaign, the sizable colt breezed six times over the main track before the conditioner shipped him to Saratoga where he trained forwardly on the Oklahoma training turf.

Arrest Me Red made his seasonal debut with a neck score in the Mahony at 5 ½-furlongs on the Saratoga turf.

“He’s a beautiful horse. We got him here at Keeneland and he had several workouts but wasn’t very impressive at all,” Ward said. “He was getting outworked and for a big, sturdy bugger you’d expect a lot more because he’s a sturdy and imposing-type horse. He’s like a big tank. I put him with just average horses and they bested him in the mornings.

“We got him up to Saratoga on the turf and away he went,” Ward continued. “There’s horses-for-courses and horses-for-surfaces and this guy is a grass specialist.”

Ward said he was pleased with Saturday’s effort and that Arrest Me Red will now point to the Grade 1, $1 million Breeders’ Cup Turf Sprint, a five-furlong test on November 6 at Del Mar.

“It’s nice when a plan comes through,” Ward said. “He came out of the race great and scoped clean, so off we go.”

Ward is likely to have a big presence in the Breeders’ Cup Turf Sprint with Golden Pal, Campanelle and Kimari all under consideration.

Hall of Fame trainer Todd Pletcher sent out three starters in Saturday’s Grade 1 Champagne with maiden Commandperformance closing to finish second ahead of stablemates Wit and My Prankster in the one-turn mile for juveniles won by Jack Christopher.

Repole Stable and St. Elias Stable’s Commandperformance lunged at the start of his six-furlong debut on September 6 over a muddy and sealed track at Saratoga, rallying to finish second.

On Saturday, with Tyler Gaffalione up from the outermost post 6, the Union Rags gray closed to finish second, just 2 3/4-lengths to Jack Christopher and seven lengths in front of Wit.

“He ran well first time out,” said Pletcher’s Belmont-based assistant Byron Hughes. “He came back and put in a good breeze here and we expected him to run up to his training. He got a good post position and Tyler rode him well. He ran a big race.”

Repole Stable, St. Elias Stable and Gainesway Stable’s Wit was an impressive eight-length winner of the six-furlong Grade 3 Sanford in July at Saratoga ahead of a troubled second in the seven-furlong Grade 1 Hopeful where he stumbled at the break.

On Saturday, with regular pilot Irad Ortiz, Jr. up, Wit was off a step slow and encountered traffic trouble approaching the quarter pole.

“He got in a little trouble on the turn,” Hughes said. “Irad said there was a tired horse in front of him and that he was going in and out and was trying to find the best route. He couldn’t find a hole right away and that might have cost him a few lengths.”

Robert and Lawana Low’s My Prankster was a 10-length maiden winner at first asking sprinting 6 1/2-furlongs on August 21 at the Spa, but failed to make an impact in the Champagne.

“We didn’t have any excuse for him after the race or this morning. We’ll regroup with him and go for there,” Hughes said.

St. Elias Stable’s Dr Post exited the inside post under Ortiz Jr. in the Grade 1 Woodward but was forced to rally five-wide down the lane to complete the trifecta, 2 1/2-lengths to Art Collector.

“It was a big effort. He went the widest out of everybody. He was still grinding it out there at the end,” Hughes said. “I thought it was a good effort. A little more pace and maybe back to two turns might help, but the effort was definitely what we wanted to see from him for sure.”

Spendthrift Farm homebred Following Sea, a 3-year-old Runhappy colt, has made a trio of starts for Pletcher this year, besting elders in an allowance sprint in June at Belmont ahead of a second via disqualification in the nine-furlong Grade 1 Haskell on July 17. Last out, Following Sea finished third in the seven-furlong Grade 1 H. Allen Jerkens Memorial on August 28 at the Spa.

Following Sea breezed a half-mile solo in 48.38 Saturday on the Belmont dirt training track in preparation for a start in the six-furlong Grade 2, $250,000 Vosburgh on October 9, which offers a “Win and You’re In” berth to the Grade 1 Breeders’ Cup Sprint in November at Del Mar.

“He did it all well within himself,” said Hughes regarding the breeze. “He had a good gallop out and cooled out OK. He looked good this morning. We’re very happy with the way he’s training right now. Hopefully he runs like he’s been training.”

Trained by Christophe Clement, the 4-year-old chestnut son of Declaration of War seeks to keep an unbeaten record at 12 furlongs intact following victories in the Grand Couturier on July 5 at Belmont before winning the Grade 1 Resorts World Casino Sword Dancer eight weeks later at Saratoga.

“He worked very well this morning,” Clement said. “It was a strong work and he finished up very nicely, so I’m excited for next week.”

Also appearing on Sunday’s work tab for Clement was dual graded stakes winner Mutamakina who completed a half-mile move in 49.20 seconds over the inner turf. Al Shiraa’aa Farm’s daughter of Nathaniel captured the Grade 2 Dance Smartly on August 22 at Woodbine last out and will return to the Toronto oval for the Grade 1 E.P. Taylor on October 17.

Scheduled to accompany Mutamakina for the journey up north is stable mate La Dragontea, a winner of the Grade 2 Canadian on September 18 at Woodbine who also will target the E.P. Taylor.

Clement said he plans on saddling multiple contenders next weekend for the Grade 3, $150,000 Matron, a six-furlong turf event for juvenile fillies. Possible contenders for the Clement barn include stakes-winner Derrynane, who captured the Woodbine Cares on September 19, as well as maiden winners The Club and Gal In a Rush.