Belmont Park Barn Notes: Gufo Being Pointed to BC Turf

Belmont Park Barn Notes: Gufo Being Pointed to BC Turf 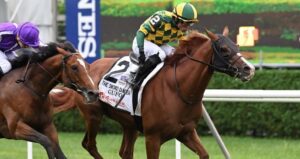 Otter Bend Stables’ Gufo remains in training for the Grade 1, $4 million Breeders’ Cup Turf, but trainer Christophe Clement said he has still not officially committed to the race.

The chestnut son of Declaration of War was third in last Saturday’s Grade 1 Joe Hirsch Tur Classic, six weeks after earning an entry into the Turf when capturing the “Win And You’re In” Grade 1 Resorts World Casino Sword Dancer at Saratoga.

“We are training him to go to the Breeders’ Cup at the moment,” Clement said. “I will speak to [Otter Bend Stables owner] Mr. Cainelli in the coming week for the plan and we’ll make a decision. He’ll breeze next weekend and then we’ll assess him after the work.”

Never out of the money in a baker’s dozen lifetime starts, Gufo captured the Grade 1 Belmont Derby Invitational last October and the Grand Couturier in July at Belmont. He was a respective second and third in his first two starts of the year in the Man o’ War and Manhattan, both Grade 1 races at Belmont. He has banked earnings of nearly $1.2 million.

On Saturday morning, Clement breezed his graded stakes-placed pair Soldier Rising and City Man in company over the Belmont inner turf in 47.20 seconds.

City Man, a three-time New York-bred stakes winner, will make his next start in the $200,000 Mohawk as part of a lucrative Empire Showcase Day on October 30.

“They worked a touch quick, but they worked well,” Clement said. “They came back in good order and are in good shape so far. Solider Rising will go to the Hill Prince and City Man is on target for the Mohawk.”

Soldier Rising will see a significant cutback in distance in the nine-furlong Hill Prince after finishing second in the Jockey Club Derby at 1 ½ miles.

“With the way he worked today, I think he’ll be okay,” Clement said.

Also on the work tab for Clement was Moyglare Stud Farm’s four-time winner Beautiful Lover, who went an easy half-mile in 52.10 seconds. The 5-year-old Arch mare will target the $100,000 Zagora on October 31 at Belmont.

“She worked well. It was a slow, but by design. She finished up nicely,” Clement said.

A last-out fifth in the Grade 3 Fasig-Tipton Waya on October 3, Beautiful Lover defeated eventual graded stakes placed Miss Teheran in a 1 1/16-mile allowance optional claiming tilt on June 27 at Belmont. She secured a stakes win in capturing the Boiling Springs in 2019 at Monmouth Park and earned graded stakes black type last season when second in the Grade 2 Hillsborough at Tampa Bay Downs and the Grade 3 Matchmaker at Monmouth. 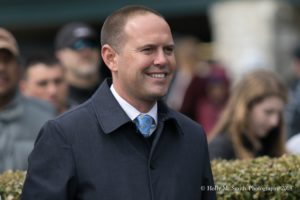 Four-time Eclipse Award-winning trainer Chad Brown breezed a number of his Breeders’ Cup contenders Saturday at Belmont, including Grade 1 Champagne-winner Jack Christopher, who worked a half-mile in 49.05 over Big Sandy.

“He was great. He was in control the entire way and galloped out super. He came back good,” Brown said.

Brown said he’s feeling good about his Breeders’ Cup contingent, a number of which breezed over the inner turf Saturday at Belmont.

“A lot of them are coming into the race well,” Brown said. “These are tough races we’re going in. The Breeders’ Cup races are always that way but we have some shots in a number of races, so we’ll see.”

“They went excellent this morning. Both horses are on target for the Breeders’ Cup,” Brown said.

Domestic Spending, a 4-year-old Kingman gelding pointed to the Grade 1 Breeders’ Cup Turf, completed his sophomore season with a win in the Grade 1 Hollywood Derby in November at Del Mar.

He returned on May 1 to dead heat for victory with Colonel Liam in the Grade 1 Bourbon Turf Classic at Churchill Downs and completed a Grade 1 triple with a 2 3/4-length score over stablemate Tribhuvan in the Manhattan ahead of a closing second in the Grade 1 Mr. D on August 14 at Arlington Park.

Domestic Spending is one of three Breeders’ Cup Turf contenders for Brown along with Tribhuvan and recent Grade 1 Joe Hirsch Turf Classic-winner Rockemperor.

Raging Bull, a 6-year-old son of Dark Angel, is pointed to the Breeders’ Cup Mile following a closing third in the Grade 1 Woodbine Mile on September 18 which was contested over good going.

“He’s looking for really fast ground and I expect to get that at Del Mar,” Brown said.

Brown noted that he would pre-enter Blowout, recent winner of the Grade 1 First Lady at Keeneland, to the Mile.

My Sister Nat captured the 11-furlong Grade 3 Waya last out on October 3 at Belmont and will travel the same distance at Del Mar on November 6 in the Breeders’ Cup Filly and Mare Turf.

“The mile and three eighths is a good trip for her,” Brown said.

Juddmonte’s Pocket Square [1:02.02], also on target for the Filly and Mare Turf, worked five-eighths in company with Swift Thoroughbreds’, Madaket Stables, and Wonder Stables Tamahere [1:02.11] over the inner turf.

Pocket Square, a winner of 5-of-9 starts, captured the Grade 3 Athenia at nine furlongs over good Belmont turf on September 25.

“The filly is training pretty good. I’m going to pre-enter her in the Breeders’ Cup Filly and Mare Turf and see what it looks like,” Brown said. “Her last race really changed my mind about her. I thought she ran good at that distance and the way she galloped out steady.

Tamahere, last-out winner of the Violet over yielding Monmouth Park turf on September 25, is pointed to next Saturday’s Grade 2 Noble Damsel.

Klaravich Stables’ Portfolio Company, a 2-year-old Kitten’s Joy bay, breezed a half-mile in 49.41 in company with General Ken, a recent private purchase for an ownership led by Louis Lazzinnaro.

A maiden winner, Portfolio Company finished second in both the Grade 3 With Anticipation in September at Saratoga and the Grade 2 Pilgrim last out on October 3 at Belmont. He is targeting the Grade 1 Breeders’ Cup Juvenile Turf.

“The horse has settled in nicely and is training along well,” Brown said. “His one win looked impressive. He came to us in good shape, so we’ll see. I liked his breeze on the turf today.”

Brown also confirmed that Royal Flag, last out winner of the Grade 2 Beldame, will target the Grade 1 Breeders’ Cup Distaff.

Brown will send out a trio of contenders for Sunday’s Grade 1 E.P. Taylor at Woodbine, led by defending champ Etoile along with Kalifornia Queen and Great Island.

Last year, a prominent Etoile captured the 10-furlong test over the E.P. Taylor Turf Course by a neck. The 5-year-old Siyouni mare has made just two starts this season, finishing fourth in the Grade 1 Jenny Wiley in April at Keeneland ahead of a closing second to returning rival Mutamakina in the Grade 2 Dance Smartly at Woodbine.

“She seems to like it up there and it made a lot of sense to let her defend her title there,” Brown said. “She made a nice run last time. She’s training well and she’s fresh. I expect her to run well.”

Brown said that Kalifornia Queen, a closing third last out in the Grade 2 Ballston Spa at Saratoga, is training well ahead of her first Grade 1 appearance in North America.

“She certainly is [improving]. I think she’s sitting on her best race,” Brown said.

Brown will also be represented by Great Island [post 8, Rafael Hernandez], who captured the Grade 3 Matchmaker two starts back over firm Monmouth turf.