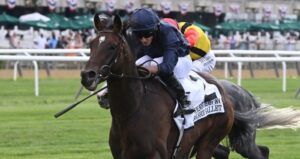 The Jockey Club Derby is slated as Race 10 on Saturday’s lucrative 11-race card which will also feature the 1 3/8-miles $700,000 Jockey Club Oaks, the concluding leg of the Turf Triple series for 3-year-old fillies, in Race 9; and the 1 5/8-mile $300,000 Grand Prix American Jockey Club Invitational in Race 4.

Mrs. John Magnier, Michael B. Tabor, Derrick Smith and Westerberg’s Bolshoi Ballet, by the late Galileo, was a stewards scratch from the Group 2 Prix Niel on September 12 at Longchamp due to an irregularity with the vaccination record in his passport and subsequently redirected to New York.

“He was in France on Sunday, but we didn’t run him so we decided to bring him here. I think the wider turns suit him well,” Comerford said. “He’s won here two starts back and seemed to go around here over a shorter distance. His last start was a good experience for him. He’s won here and has form here, so that’s always a big help.”

The talented colt launched his sophomore season with decisive wins in the Ballysax on April 11 and the Derrinstown Stud Derby Trial on May 9, both Group 3 events at 1 1/4 miles at Leopardstown.

Bolshoi Ballet entered the Belmont Derby from a disappointing seventh as the beaten favorite in the Group 1 Epsom Derby on June 5, emerging with a cut to his right hind leg.

Comerford said the stretch out in distance should be beneficial.

Bolshoi Ballet will jump from the outermost post 8 with Moore in the irons.

Godolphin and trainer Charlie Appleby, who have already teamed up to win a pair of New York Grade 1s this year with Althiqa, will invade once more with the talented homebred Yibir.

Appleby successfully raided the NYRA circuit this summer with one-two finishes by Althiqa and Summer Romance in the Grade 1 Longines Just a Game in June at Belmont and the Grade 1 Diana in July at Saratoga. On Saturday, the Newmarket-based conditioner will look to add to his good run with the regally-bred Yibir, who enters from a 1 1/4-length score in the Group 2 Great Voltigeur on August 18 at York Racecourse.

By Dubawi and out of the Monsun mare Rumh, Yibir is a full-brother to multiple Group 1 winner and 2018 Grade 1 Breeders’ Cup Filly and Mare Turf runner-up Wild Illusion.

The Voltigeur marked the second group score for Yibir since being gelded ahead of a 2 1/2-length victory in the 1 5/8-mile Group 3 Bahrain Trophy on July 8 at Newmarket. The chestnut finished a headstrong sixth between victories in the Group 3 John Pearce Racing Gordon on July 29 at Goodwood.

Yibir arrived in New York on Sunday in the care of traveling assistant Chris Connett, who said the Voltigeur effort was expected.

“We’ve always thought he had that type of talent in him,” Connett said. “He’s just a bit of a character hence why he’s been gelded. He has phenomenal talent and when things fall right for him, he can be any kind of horse.

“In the run at Goodwood, things just didn’t go right. He got quite headstrong and he took off a little bit and did things completely the wrong way around,” added Connett. “In the Voltigeur, James just was able to get him switched off and he brought himself into the race and produced a lovely effort.”

“She was a lovely big mare and I had a very soft spot for her. I was able to take her to the races many times and he’s a big horse just like she was,” Connett said. “She was a big mama and temperament wise, they’re very similar. She had a couple of quirks and so does he. Talent and mindset run in the family.”

Jamie Spencer will be tasked with engineering a winning trip from post 2.

“I think the plan will be to get cover early and carry himself into the race and make one run,” Connett said. “It’s the kind of track that should suit him. It’s one of the biggest galloping tracks in North America and it will suit the big horse that he is.”

Last out, with Hall of Famer John Velazquez up, Tokyo Gold rallied from last-of-9 to finish second, 1 1/4-lengths back of Bolshoi Ballet in the Belmont Derby.

Madaket Stables, Michael Dubb, Morris Bailey, Wonder Stables and Michael J. Caruso’s Soldier Rising launched his career in France for trainer Andre Fabre, posting a record of 4-2-2-0, including a score in the 12-furlong Prix de Champlatreux in April at Chantilly.

Transferred to the care of Christophe Clement, the Frankel gelding made his North American debut with a closing second, defeated a length to the Joseph O’Brien-trained State of Rest in the 1 3/16-mile Grade 1 Saratoga Derby Invitational.

“I think O’Brien’s horse got first run at us. We got through at the rail, but I’m not sure it would have made a difference. We were probably second best that day,” said Clement assistant Christophe Lorieul.

Lorieul said Soldier Rising, who breezed a half-mile in 50 flat Sunday on the Belmont inner turf, will be able to handle the added distance.

“He had an easy work here on Sunday over the turf and he went well. I’ve been told he had been working well at Saratoga as well,” Lorieul said. “The distance is not an issue. Obviously, the competition will be tough. We’re happy with the horse and he looks great.”

Calumet Farm’s Tango Tango Tango enters from a pair of strong starts at Arlington Park, including a win in the 1 1/16-mile American Derby on July 17 ahead of a prominent effort last out when second to Point Me By in the one-mile Grade 1 Bruce D. on August 14.

Trained by Jack Sisterson, the lightly raced Tourist colt will emerge from the inside post under Flavien Prat.

Hayward Pressman, Diamond M Stable and Donna R. Pressman’s Step Dancer was squeezed at the start last out in the one-mile NYSSS Cab Calloway on July 28 at the Spa, but rallied four-wide down the lane to defeat his fellow eligible New York-sired rivals.

Trained by Barclay Tagg, the New York-bred son of War Dancer finished third in the Grade 2 Pilgrim in October at Belmont ahead of a win in the open Awad at 1 1/16-miles over yielding Belmont turf to close out his juvenile campaign.

Following a difficult trip when eighth in the Cutler Bay in March at Gulfstream to launch his sophomore season, Step Dancer hit the board in a pair of Belmont turf starts, including a third in a 1 1/16-mile state-bred optional-claimer in May and a closing second in the seven-furlong NYSSS Spectacular Bid in June.

Rounding out the field are graded-stakes placed Slicked Back [post 7, Luis Saez] and the stakes-placed Experienced [post 6, Jose Ortiz].

Admission for the Belmont fall meet is available for just $5. Buy online at Ticketmaster.com or at the gate. Group hospitality seating in the West Wing and Top of the Stretch can be purchased by calling the NYRA box office at 844-NYRA-TIX. Box Seats can be purchased by emailing [email protected] or calling 718-296-5172.

The Belmont Room will be open every Saturday and Sunday for dining reservations. Reserve your spot today at nyra.com/belmont/visit/dining.