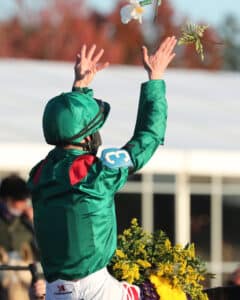 Weekend Winners Came From All Around the World

There were 14 World Championship races this weekend at Del Mar and no one main base of operations had a stranglehold on the victors.

Domestically, four winners were based in Kentucky, three in New York and two in California, European runners accounted for three victories and Japan posted its first two World Championships victories.

In all, six foreign-breds won Breeders’ Cup races, a record for a single year. Plus, winning owners came from Japan, England, Ireland, South Korea and the UAE.

The Kentucky-based winners were Twilight Gleaming (IRE) in the Juvenile Turf Sprint (G2), Golden Pal in the Turf Sprint (G1), Aloha West in the Qatar Racing Sprint (G1) and Knicks Go in the Longines Classic (G1).

The California-based winners were Corniche in the TVG Juvenile presented by Thoroughbred Aftercare Alliance (G1) and Ce Ce in the Filly and Mare Sprint (G1).

The European-based winners were Modern Games (IRE) in the Juvenile Turf (G1), Space Blues (IRE) in the FanDuel Mile (G1) presented by PDJF and Yibir (GB) in the Longines Turf (G1).

The Japan-based winners were Loves Only You (JPN) in the Maker’s Mark Filly and Mare Turf (G1) and Marche Lorraine (JPN) in the Longines Distaff (G1).

Irad Ortiz Jr., who rode three winners and added a second place and three fourth-place finishes, won the 19th annual Bill Shoemaker Award given to the most outstanding jockey in the 2021 Breeders’ Cup World Championships hosted by Del Mar.

Ortiz’s victories came on Twilight Gleaming (IRE) in the Juvenile Turf Sprint (G2), Golden Pal in the Turf Sprint (G1) and Life Is Good in the Big Ass Fans Dirt Mile (G1). He finished second in the Longines Turf (G1) on Broome (IRE).

William Buick also rode three winners, but had no other top-four finishes that formed the basis for the Shoemaker Award tiebreaker with jockeys riding an equal number of winners. Buick’s wins came on Modern Games (IRE) in the Juvenile Turf (G1), Space Blues (IRE) in the FanDuel Mile (G1) presented by PDJF and Yibir (GB) in the Longines Turf (G1).

Rosario won aboard Knicks Go in the Longines Classic (G1) and Echo Zulu in the NetJets Juvenile Fillies (G1) and Ortiz was victorious on Pizza Bianca in the Juvenile Fillies Turf (G1) and Aloha West in the Qatar Racing Sprint (G1).

Shoemaker remains the oldest jockey to ride a Breeders’ Cup winner when he guided Ferdinand to victory in the 1987 Classic at Hollywood Park. He was 56 years, 3 months and 2 days old at the time.

On Friday, Mike Smith recorded his record-enhancing 27th Breeders’ Cup victory aboard Corniche in the TVG Juvenile (G1) presented by Thoroughbred Aftercare Alliance. Smith is a week younger than Shoemaker was when he rode Ferdinand to the 1987 victory.

Yuga Kawada, who was making his Breeders’ Cup debut, and Oisin Murphy, who was riding in his fifth World Championships, each posted their initial Breeders’ Cup victories on Saturday.

Kawada scored with his second mount, Loves Only You (JPN) in the Maker’s Mark Filly & Mare Turf (G1) and Murphy won with his 11th overall mount, Marche Lorraine (JPN) in the Longines Distaff (G1).

By the end of the weekend, both trainers had added Breeders’ Cup winner to their resumes.

Yahagi did him one better by winning with his first two starters: Loves Only You (JPN) in the Maker’s Mark Filly & Mare Turf (G1) and Marche Lorraine (JPN) in the Longines Distaff (G1).

Two 2020 winners at Keeneland came back in different races this year to return to the winner’s circle in different races. Knicks Go, winner of the 2020 Big Ass Fans Dirt Mile (G1), scored a front-running victory in the Longines Classic (G1) and Golden Pal, winner of the 2020 Juvenile Turf Sprint (G2), repeated his front-running performance to win the Turf Sprint (G1).

Twilight Gleaming (IRE) opened this year’s event Friday afternoon with a half-length score to follow in the hoofprints of Four Wheel Drive in 2019 and Golden Pal in 2020.

Two other trainers besides Ward have won the same race in three consecutive years: D. Wayne Lukas, who did it twice, and Chad Brown.

Brown won the Juvenile Fillies Turf in 2016, 2017 and 2018 with New Money Honey, Rushing Fall and Newspaperofrecord (IRE), respectively. Bob Baffert won the Classic from 2014-2016 with Bayern, American Phaoroah and Arrogate.

A total of seven horses have made five starts in the Breeders’ Cup World Championships with Channel Maker and Firenze Fire joining the club Saturday.

Channel Maker finished fifth in the Longines Turf, his fourth appearance in that race to go with a Juvenile Turf start in 2016 at Santa Anita.

Firenze Fire finished eighth in his third Sprint start. Previously he had run in the Juvenile and Dirt Mile.

Five Favorites Won Over the Weekend

Five favorites delivered victories from the 14 Championship races during the 2021 Breeders’ Cup at Del Mar.

The highest price winner of the weekend was Marche Lorraine (JPN) in the Longines Distaff (G1) with a $101.80 win mutual on a $2 bet.