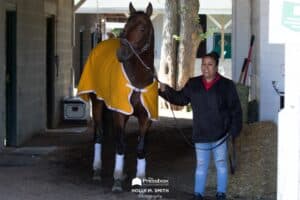 “I jogged Art Collector,” Mott said. “When we are home, we always give him a jog day after he works, but today we walked him through the paddock and jogged him again and everything went fine.”

Since joining the Mott barn over the summer, the son of 2006 Breeders’ Cup Classic runner-up Bernardini and 2011 Breeders’ Cup Filly & Mare Turf fourth-place finisher Distorted Legacy is perfect from three starts, including the Alydar Stakes (Listed) at Saratoga, Charles Town Classic (G2) at its namesake course and Woodward (G1) at Belmont.

“He’s just improved on his own and we haven’t done anything, really, except let him lead one winning effort into another and build himself from race to race,” Mott said. “He’s got three races in him now and is just doing really good. He looks stronger and has continued to develop, which is what you hope a 4-year-old is going to do. That’s what you want him do and it is what it looks like he’s been doing that throughout the course of the year.”

Essential Quality/Knicks Go – Trainer Brad Cox’s powerhouse duo of Essential Quality and Knicks Go, both returning Breeders’ Cup winners, arrived at Del Mar around 10:30 p.m. Monday from Kentucky and wasted no time getting to work Tuesday. Essential Quality, the 2020 Juvenile winner and 2-year-old champion, jogged, while Knicks Go, the 2020 Dirt Mile winner, galloped once around the track. Both were ridden by regular exercise rider Edvin Vargas.

“Essential Quality was really, really good, he looked amazing training out there,” Cox said. “He was looking around, but that was to be expected. He just jogged. Knicks Go has good energy so he’ll probably do a little more. So far, so good. They all shipped in well. It was a long day yesterday, but they all look good.”

Express Train – Express Train, winner of the San Diego Handicap over the Del Mar main track this past summer, continued his preparations for a berth in the Classic Tues morning with a strong 1 1/2m gallop under regular exercise rider Amy Vasco.

Trainer John Shirreffs, who famously won the 2009 Classic renewal with Zenyatta, reported, “Right now, he’s training at a level above his most recent races.  Although he’s yet to win at the (Classic’s 10-furlong) distance, I’m confident he can get it.”  Shirreffs added, “In the recent Pacific Classic (for which he was the post time favorite), he just didn’t get his trip.”

Hot Rod Charlie – Roadrunner Racing, Bill Strauss, Boat Racing and Gainesway Stable’s popular 3-year-old colt Hot Rod Charlie continued his Breeders’ Cup Classic preparation when leaving Del Mar’s Barn Y at 7:45 a.m. and galloping an easy circuit of the dirt track. The 2020 Breeders’ Cup Juvenile runner-up and half-brother to 2019 Breeders’ Cup Sprint winner Mitole drew post three of nine in the $6 million race and will be ridden by Flavien Prat, who has been aboard for five of his 11 races. Trained by Doug O’Neill, he will seek to be the conditioner’s sixth World Championships winner.

“I think there’s such a long run to the first turn, so any nine of the posts is probably not a big deal, but it’s good that Flavien knows him so well and ‘Charlie’ has good gate speed,” O’Neill said. “He will try to put himself in a good position. It’s nine solid horses and nine solid jockeys, so it’s really all a matter of positioning and I feel good that we can find ourselves a good spot.”

Max Player – George Hall and SportBLX Thoroughbred Corp’s Max Player walked the shedrow Tuesday morning, one day after completing his final work in advance of the Classic, and assistant trainer Scott Blasi reported that the horse came out of the half-mile work well.

Hall of Fame trainer Steve Asmussen, who is seeking his third Classic victory, was scheduled to arrive later Tuesday.

Medina Spirit – Kentucky Derby winner Medina Spirit, conditioned by four-time Classic winner Bob Baffert, was on the track this morning shortly after the renovation break for his daily gallop.  The sophomore colt is the co-third choice in the morning line for Saturday’s Classic.

Stilleto Boy galloped once around before setting about his work.

“The first time around at the seven-eighths pole he was looking at all the photographers but the second time, he was all business,” Desormeaux said. “It was either going to be 51 or 48 (seconds) and when I got to the quarter pole, I toned him down a bit. I liked what I felt this morning.”

Trainer Ed Moger Jr. was happy with the work.

“He didn’t need to go quick,” Moger said of Stilleto Boy, who had worked a best-of-15 5f at Santa Anita last Wednesday before shipping to Del Mar.

Runner-up to Medina Spirit in the Awesome Again in his most recent start, Stilleto Boy is 30-1 on the morning line for the Classic and will break from post seven.

“We know he likes this track and he likes the distance,” Leyva said. “He’s settled in again here and is doing well. If the race falls apart, he could get a piece of it.”