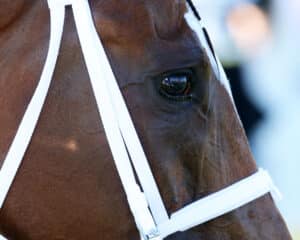 As Time Goes By/Private Mission – The once-beaten 3YO filly Private Mission and her older stakes-winning stablemate As Time Goes By, the 1-2 finishers in the recent Zenyatta Stakes, were both out for morning gallops on Del Mar’s main track this morning preparing for starts in Saturday’s $2 million Longines Breeders’ Cup Distaff.

Polanco, who had Blue Stripe come to his barn in May from Argentina, had penciled in a work for Tuesday morning but opted for the gallop.

“She has done a lot of training before and she is ready to do anything,” said Polanco of Blue Stripe, whose last work was 1m in 1:42 3/5.

Blue Stripe, who will be making her first start in six months in Saturday’s Distaff, is a half-sister to 2019 Longines Distaff winner Blue Prize (ARG).

Listed at 30-1 on the morning line for the Distaff, Blue Stripe will be ridden by Frankie Dettori.

Clairiere – Stonestreet Farm’s Cotillion winner Clairiere, one of three 3-year-olds in the Distaff field, returned to the track for the first time since working Sunday and jogged once around.

Owned by Peter Brant, Dunbar Road drew post 11 under Jose Ortiz in what will be her career swan song. The 2019 Alabama (G1) winner makes her 16th start and seeks her seventh victory overall. Second last out in the Spinster (G1) at Keeneland to Distaff favorite Letruska, she will look to improve upon a fifth-place finish in 2019 and third-place finish in 2020.

Royal Flag drew post two with Joel Rosario and enters off a career-best effort when winning Belmont’s Beldame Invitational (G2) by 4¼ lengths. Also a 5yo, the daughter of Candy Ride is a homebred of W.S. Farish and seeks her seventh career victory in her 13th start.

“They both are training very well, but both need pace to run at. They need Letruska softened up a bit, but there’s also some other very good horses in there Shedaresthedevil, who is top class,” Brown said. “The race will be interesting with Horologist (post seven) drawn outside of Letruska (post six).

“Dunbar Road has been great and had an outstanding career,” Brown continued. “Unfortunately, we had a couple derailments with some throat issues, but she’s back on track. She was unlucky in this race last year, getting stopped turning for home at the quarter-pole. She would have been right there. She really likes Del Mar’s surface, which is another key with her.”

Horologist – The most experienced horse in the Longines Distaff, Bill Mott-trained Horologist will try to time it out perfectly Saturday when she makes her second start in the 9f affair. Owned by There’s a Chance Stable, Medallion Racing, Abbondanza Racing, Parkland Thoroughbreds, Paradise Farms and David Staudacher, the New Jersey-bred daughter of Gemologist makes her 27th start and fifth in Grade 1 company. She has yet to break through at the top level.

The 30-1 morning line price galloped one circuit of the Del Mar dirt track Tuesday morning. She drew post seven of 11 fillies and mares in the $2 million race. Last year, she was ninth of 10 at 14-1 odds.

“It’s a good race and we’re a big price in there — we know that,” Mott said. “We’re reaching out in a couple spots with horses like (Breeders’ Cup Mile runner) Casa Creed and her. If everything goes well and they have a big day, maybe we can get a piece of it.”

Letruska – St. George Stable’s 8-5 favorite for the Distaff, the 5yo Letruska, schooled at the gate Tuesday and galloped 1 ½ miles at Del Mar.

Trainer Fausto Gutierrez’s first Breeders’ Cup starter has won five consecutive graded stakes, four of the Grade 1 – and was made the 8-5 favorite in the Distaff. Under Irad Ortiz Jr. she will start from post six in the 11-horse field.

Letruska shipped from Keeneland to Del Mar on Oct. 24 and had her final timed work Saturday, 5f in 1:01.20. She walked Sunday, jogged with a pony Monday and resumed galloping Tuesday.

“I think she did it very easily,” Gutierrez said. “The exercise rider (Roger Horgan) was very happy and told me she feels very, very good. That’s what any trainer wants to know about the horse. With the travel, the training, the situations, sometimes you have to be around some problems. Right now, we are in very good form.”

Gutierrez said he might change up her gallops a bit this week, but said she is ready for the Distaff.

“The only point now is that she arrives concentrated and happy,” he said. “We don’t have anything else to do.”

Gutierrez, 54, is a superstar trainer in Mexico, who won 10 consecutive training titles at Hipodromo de Las Americas Racetrack in Mexico City from 2010-19. He said he typically trained 200 horses a year in Mexico. Gutierrez has been training in the U.S. since March 2020 and is based in Florida.

Malathaat – Much was expected of yearling filly to be named Malathaat when Shadwell Stable purchased her for $1,050,000 at the 2019 Keeneland September sale. She has delivered.

With six wins in seven starts and more than $1.5 million in earnings, the 3yo daughter of two-time Horse of the Year Curlin enters the Distaff as a serious contender to Letruska, the 8-5 favorite in the field of 11.

Like her dam, Dreaming of Julia, who also was trained by Todd Pletcher, and her second dam, Dream Rush, Malathaat is a Grade 1 winner. She has the highest-level trifecta for 3yo fillies on her resume: the Ashland, the Kentucky Oaks and the Alabama.

By design, the Distaff will be Malathaat’s first start since her 1 ½-lengths victory in the Alabama, in which she stumbled at the start. Pletcher said that he and her connections have stuck to a careful schedule that began with a perfect record in three starts as a 2yo.

“She won the Ashland and then the Kentucky Oaks, and we gave some thought to running her in the Belmont (Stakes),” Pletcher said. “But we felt like she just lost a little bit of weight during the Ashland and the Oaks campaign. At that point we decided when we weren’t going to run in the Belmont to kind of come up with a plan for the rest of the season. We decided to go to the Coaching Club and Alabama and then not run between the Alabama and the Distaff.

“That’s kind of been the plan since May and fortunately everything is going according to plan minus winning the Coaching Club. I think she’s trained as well as ever and just seems like she’s coming into the race in good shape.”

Malathaat was upset by Maracuja in the Coaching Club American Oaks on July 24 at Saratoga. She was pressed throughout in the four-horse field and was not able to hold off late-running Maracuja at the wire.

Pletcher resumed her timed works on Sept. 18 at Belmont Park and she had seven, including a bullet 5f in 1:01.23 on Friday, before shipping from New York to Del Mar over the weekend.

“We’ve had a really good schedule with her,” Pletcher said. “She’s been breezing terrific, like she always does.”

Pletcher sent Malathaat out for a routine gallop Tuesday morning and said she has settled in well at Del Mar. He was satisfied with her post position.

“She’s (post) three, which hopefully gives her the opportunity to get to the first turn and save a little ground.”

Pletcher has a 2-1-4 record with 20 starters in the Distaff. His winners were Ashado (2004) and Stopchargingmaria (2015). Hall of Fame jockey John Velazquez has the mount.

Shedaresthedevil – Shedaresthedevil, the winner of Del Mar’s Clement L. Hirsch Stakes in August, had an easy jog Tuesday morning under exercise rider Edvin Vargas, one day after arriving from Kentucky with her six stablemates.

Shedarethedevil and Letruska, the Distaff favorite, have each beaten the other once this year and Cox believes his filly would be worthy of championship honors should she top her rival once again. Shedaresthedevil easily bested Letruska in the Azeri Stakes at Oaklawn in March, but had to settle for third when the two met in the Ogden Phipps Stakes at Belmont in June.

“I don’t have a vote, but I’d think (Shedaresthedevil) would be the champion if she wins the Distaff,” Cox said. “It would be her third Grade 1 this year and she would have beaten Letruska twice.”