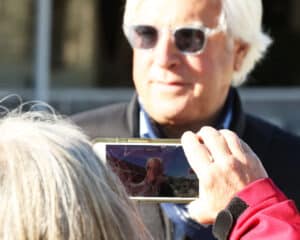 The Breeders’ Cup — which will be held this year on Nov. 5 & 6 at Del Mar Turf Club — will allow horses trained by the embattled trainer Bob Baffert to enter and run in the industry’s Championship Day of racing, according to a release by the sponsoring organization on Sunday.

Baffert — who has already been prohibited from having any horses on the grounds and eliminated from entering any horses at Churchill Downs in Louisville after his colt Medina Spirit tested positive after winning this year’s Kentucky Derby and has gone to court to overturn NYRA’s prohibition from participating at Saratoga, Belmont Park and Aqueduct — has come under significant question and scrutiny after a series of positive test results in California, Arkansas and Kentucky over the past few years.

Currently, the Kentucky Horse Racing Commission is awaiting the final results of a split sample urine test to offer an official ruling on the status of Medina Spirit’s victory in this year’s Kentucky Derby. A blood test revealed that the horse tested “positive” for a drug overage following his upset win in the 2021 “Run for the Roses.” A split sample of the blood test revealed the same results.

In September, the Breeders’ Cup Board of Directors announced that it was taking the matter of Baffert’s participation in this year’s Breeders’ Cup under study and advisement.

On Sunday, the organization announced — via a press release — that it would allow for horses under the care of Baffert to be entered and to run under certain conditions, that have been agreed to by the trainer and his legal counsel.

Some of those conditions include “out of competition” testing and pre-race testing and increased security of all horses to be stabled on the grounds of Del Mar and included in the event’s extravagant two-day Championship races.

The announcement also released details that Baffert would have to pay for the additional tests and cover the costs of the increased security measures and barn video cameras.

Here is a copy of the full statement from the Breeders’ Cup:

Breeders’ Cup conducts Thoroughbred racing at the highest levels of safety and integrity for the benefit of our horses, riders, participants, fans and bettors. To this end, the Breeders’ Cup board of directors convened a special review under legal counsel to evaluate the recent conduct of Mr. Bob Baffert in order to determine whether he should be permitted to participate in the 2021 World Championships. In the interest of fairness, Mr. Baffert was provided with advanced notice and an opportunity to take part in the process, and the board appreciated his participation and cooperation in connection with its inquiries.

Based on the totality of the circumstances, Breeders’ Cup has decided to require all horses trained by Mr. Baffert to undergo enhanced out-of-competition, pre- and post-race testing and other security protocols, at his own expense, in order to participate in the 2021 Breeders’ Cup World Championships at Del Mar.

In addition to operating under the rules and regulations of both the California Horse Racing Board and Del Mar for the 2021 World Championships, those competing in any Breeders’ Cup race are subject to another set of rules specific to the Breeders’ Cup, which include the Breeders’ Cup Condition of Entry, the Prohibited Substance Rule and the Convicted Trainer Rule. On top of our industry-leading protocols and standards, additional testing and security requirements for any horse under Mr. Baffert’s care will be administered at his expense under a signed agreement to provide a more targeted layer of accountability. These additional measures include increased randomized out-of-competition testing for all prohibited and restricted substances, additional tests administered the week of the World Championships, increased veterinarian and security checks, and in-person 24-hour security surveillance ahead of the horse or horses’ respective events. Mr. Baffert has agreed to abide by each of these additional measures.

Breeders’ Cup looks forward to the uniform rules and enforcement mechanisms that the Horseracing Integrity and Safety Authority’s antidoping and medication control program will bring to our sport.