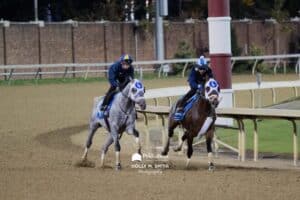 (Essential Quality, on the outside / Photos by Holly M. Smith)

Art Collector – Bruce Lunsford’s Bill Mott-trained homebred $6 million Longines Breeders’ Cup Classic (G1) contender Art Collector had an eventful gallop of the main track this morning at just prior to 9 o’clock, as a loose horse curtailed his routine exercise. It was the son of Bernardini’s first gallop of the main track since his Oct. 31 breeze.

“We had an abbreviated gallop there, but he got a gallop in,” Mott said. “There was a loose horse on the track.”

The pace for the Classic appears to be a hot one, with multiple runners who like to be on or near the lead, including Art Collector. Seven of his eight victories have come when no farther than 1½ lengths back at the first call and four of his wins have been gate-to-wire. Two of those have been under the Mott banner.

“It’s been a conscious thing to put him up in the race, which is what we wanted when we had Luis Saez, who does that well,” Mott said. “I don’t think he has to be on the lead, but we wanted to let him use his speed when it’s there. Sometimes if you have a horse who has a good cruising speed and you take it away from them, that doesn’t work.

“We know Knicks Go is going to bolt out of there and he’s right inside of us and Medina Spirit is outside, so we hope he is able to stalk, but you don’t know until the race unfolds,” Mott continued. “We have a good group of (Breeders’ Cup) horses who are doing really well. Whether they’re good enough or not, we’ll see that on Saturday.”

Art Collector was moved to the Mott barn over the summer and has reeled off a treble of triumphs in as many starts, ascending the class ladder with wins in the Alydar (Listed), Charles Town Classic (G2) and Woodward (G1). His owner-breeder is hopeful he will perform well and has chosen Mike Smith to replace Saez, aboard in all three wins and the regular rider of Belmont/Travers winner Essential Quality.

“He’s doing everything I want to see a horse do,” Lunsford said. “I just don’t know how he’s going to stack up against these. I think he fits and he looks good and has been consistent. I like my chances and I like my jockey. I did a lot of research on jockeys and I gave him a couple names and one was Mike and Bill chose (Smith), who I have a good history with. He’s got a pretty good feel for what to do and he’s probably the fittest 50-plus-year-old in the world.”

Essential Quality/Knicks Go – Trainer Brad Cox sent both Knicks Go and Essential Quality and out for gallops under exercise rider Edvin Vargas on their second morning at Del Mar. Knicks Go, the 2020 Breeders’ Cup Dirt Mile winner, is the 5-2 morning line favorite, while Essential Quality, the 2020 Juvenile and 2021 Belmont and Travers winner, is right behind him at 3-1. Even Cox is having a hard time separating them.

“I can’t separate them,” Cox said. “But, I’m excited about being in this position with both horses.

“I think it does set up well for (Essential Quality). I think Luis (Saez) obviously does knows him extremely well, and I’m putting him in a good position. That’s the one great thing about Essential Quality. He’s able to adjust to the pace and that’s, that what makes him so dangerous each and every run. We’re probably getting a pace similar or maybe even hotter than it was in the Kentucky Derby.

“It is very rare for a horse to do what Knicks Go can do. You don’t always see horses that are capable of running as quick as he can and clearing. And, he really accelerates in the turns.”

Express Train – CRK Stable’s Express Train enjoyed his routine 1 1/2m gallop just after the break Wednesday morning as he starts to wind up his final preparations for the Breeders’ Cup Classic.

While regular exercise rider Amy Vasco was up this morning, the 4 yo colt will have a new rider for Saturday’s race in Victor Espinoza.  The Triple Crown-winning jockey has enjoyed a long and fruitful relationship with trainer John Shirreffs, who opted for the change.

“Victor and I have a close relationship and we decided that having a rider with all his experience in important races would be to our advantage,” Shirreffs said.  “He’s won a lot of big ones and we have a great deal of confidence in him.”

While the mount will be his first in the afternoon with Express Train, Espinosa has been acclimating himself with the son of Union Rags for his past two workouts, including a final blowout of 5f on Sunday at Santa Anita.  Both trainer and rider have each won the Breeders’ Cup Classic once:  Shirreffs with Zenyatta in 2009 and Espinoza with American Pharaoh in 2015.

“His gallop this morning gave me goosebumps,” Strauss said. “We are feeling really well. It seems like the race should shape up well for him. There’s a lot of speed in the race and he’s very tactical. Flavien (Prat, jockey) has a lot of options with how to ride him. He can be forward or take him back and around horses. He has a very good mind and he’s really mature. We’ve got to get a good break, a good trip and hope the racing gods are smiling on us.

“I think he will be a fair price in the 3-1 range (by post time) and I think that’s probably an appropriate odds for him,” Strauss continued. “We know he’s going to run a big race — he always does. Is he good enough and does he get the trip? That’s really what it all comes down to. It’ll be a really great jockeys’ race and that’s what it’ll come down to. It’s going to be really fun.”

O’Neill expressed similar confidence in the three-time winner and earner of more than $2.1 million. After nearly shocking the world, finishing second to Essential Quality in the Juvenile at odds of 94-1, the Kentucky-bred $110,000 Fasig-Tipton October purchase was third by a neck in the Robert B. Lewis and won the Louisiana Derby impressively to set him up for the Triple Crown races. After a good third in the Kentucky Derby (G1), beaten a length, he was a game and begrudging loser in the Belmont Stakes — again to Essential Quality — setting the pace for the “Test of the Champion” and giving way in the final furlong to lose by 1¼ lengths.

Stepping up his game again, he then finished first in the Haskell Invitational, but was disqualified after causing significant interference. Two months later, he finally got his outright Grade 1 when winning the Pennsylvania Derby by 2¼ lengths. His 111 Beyer Speed Figure is the best last-race number for any horse in the Classic.

“His Pennsylvania Derby was a big confidence booster,” O’Neill said. “His spacing has been really strong all throughout the year, so I’m really happy about that, as well. He’s put in some really good works since the Pennsylvania Derby, so I am optimistic we are going to see a big effort from him.”

Max Player – Hall of Fame trainer Steve Asmussen, who became the winningest trainer in North America this summer at Saratoga, arrived Tuesday afternoon to oversee the final preparations of his horses, who have been under the watchful eye of assistant trainer Scott Blasi the last month since arriving in California.

Asmussen will be seeking a third Breeders’ Cup Classic victory with Max Player, who is following a similar pattern to the trainer’s 2007 winner Curlin and 2017 winner Gun Runner by winning his final prep in New York.

“We were excited about his Suburban win over Mystic Guide and Happy Saver,” Asmussen said. “And, then for him to follow that up with a fast track victory in the Jockey Club Gold Cup. Both of those races were at a mile and quarter. He’s had good spacing between his races. He’s trained really well. I thought that he looked really good over the Del Mar surface and then he drew (post nine), which I think is ideal for him in a race that obviously has considerably more pace than his last two races. We still want to get him in the rhythm that he’s had success with the last two races.”

Baffert stated, “I really can’t do anything about the draw. The break is always important, so that might help determine how the races shapes up.”

He added, “He likes this track and is training really well coming up to the race.” The colt worked 6f in 1:11:60 in his final workout last Friday.  Medina Spirit already has registered victories in two Grade 1 races this year.

Baffert is a four-time Breeders’ Classic winner, including last year’s renewal with Authentic.

“He’s good this morning and I am happy with the way everything is going,” Ed Moger said.

The Longines Classic will mark the fourth start for Stilleto Boy in Moger’s barn. He was purchased for $420,000 by Steve Moger at the Fasig-Tipton July Horses of Racing Age Sale after he had won the Iowa Derby by 4 ½ lengths as a 16-1 shot.

“My brother is always trying to buy a good horse and I would shoot it down,” Ed Moger said. “After the sale in Lexington, he calls me up and says he bought a horse and was sending him to me.”