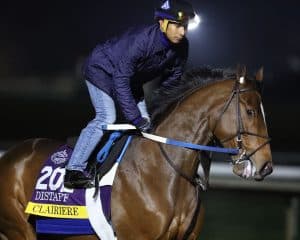 Awake At Midnyte – Longines Breeders’ Cup Distaff (G1) contender Awake At Midnyte galloped 1 1/8 m Wednesday morning over a fast track at Keeneland with exercise rider Connor Murray aboard. Trained by Doug O’Neill and owned by Reddam Racing, this will be the first Breeders’ Cup start for the 3 yo filly.

“She just needs to get a trouble-free, clean ride to let her run her race and have some horse to finish,” O’Neill said. “Whether she’s fast enough to win I don’t know, but I think she’s fast enough to hit the board. She’s a top filly that I think deserves the opportunity. She’s training really well going into it, but we’ll need a lot of things to go our way for sure.”

Awake At Midnyte has made one previous start at Keeneland in the 2022 Ashland Stakes and was fourth, beaten by fellow Longines Distaff contender Nest.

Blue Stripe will be making her fourth start of the year in Saturday’s Distaff. She returned to the races April 30 following a seventh-place finish in last year’s Distaff and won the Santa Margarita right off the bench.

“The break after the Breeders’ Cup last year was by design,” Polanco said. “We wanted to keep her fresh.”

And she will be fresh for Saturday’s race, which will be her first start since winning the Clement L. Hirsch on Aug. 6 at Del Mar.

“There was one other race in between (the Zenyatta at Santa Anita Oct. 2), but we didn’t want to do too much,” Polanco said.

Hector Berrios, who was aboard for the Del Mar victory, has the mount Saturday.

Clairiere/Society – Trainer Steve Asmussen, who won his one and only Distaff in 2014 with Untapable, has two chances this year with the 4yo Clairiere, who ran fourth in the race last year coming off a win in the Cotillion Stakes and the 3yo Society, who will try to better her stablemate coming off her own victory in the $1 million race at Parx.

“She’s obviously coming off two very fast races,” Asmussen said of Peter Blum’s Society. “She’s trained really well over this racetrack. It’s just an unbelievably accomplished group of older mares this year, but she’s running as fast as anybody and we’re excited about trying her.”               Stonestreet Stable’s Clairiere, who has won two Grade 1s and was second in another, is coming off a fifth-place finish in the Personal Ensign Stakes at Saratoga Aug. 27, the only time in her 15-race career she was worse than fourth. That day she was uncharacteristically fractious in gate.

“It caught us off guard,” Asmussen said of the incident. “We pride ourselves on how they act and how well their school. That is 100 percent our responsibility and we feel that we have that base covered. If we have if we’re fortunate enough to have success in the Distaff, we will be extremely pleased that it happened last time and not this.”

First out at 7 o’clock was Shadwell Stable’s Malathaat with Amelia Green aboard. Repole Stable, Eclipse Thoroughbred Partners and Michael House’s Nest followed at 8:45 with Nora McCormack aboard.

Pletcher said the gate schooling was normal operating procedure for his fillies that have not had any issues at the gate in the past. Both Nest and Malathaat are scheduled for paddock schooling sessions Thursday.

Search Results – Klaravich Stables’ Search Results galloped about 1m on Keeneland’s dirt track Wednesday morning with trainer Chad Brown observing. One of many formidable contenders in the Longines Distaff, she must step up at the Grade 1 level around two turns in order to do so. The daughter of Flatter owns two narrow losses in 9f, Grade 1 affairs, the G1 Personal Ensign last out.

Despite being a top-level winner around one turn, when taking the 8f Acorn, Brown was not tempted to drop her back in trip for the 7f Breeders’ Cup Filly & Mare Sprint, a race in which he trains morning line favorite Goodnight Olive.

“I think 7 furlongs is just too short for her,” Brown said. “I have Goodnight Olive in there and I don’t think she can run with her. There are other good horses in there besides Goodnight Olive, too. If I ran her at seven at this point, she’d be off the bridle the whole time. We are just going to have to work out a trip and hope she stays better at Keeneland.”

Secret Oath – For a report on what Secret Oath did Wednesday morning preparing for the Distaff, Hall of Fame trainer D. Wayne Lukas pointed to the filly’s exercise rider, French jockey Mickaelle Michel.
Michel, a globetrotting 27-year-old, relocated to America this year. Lukas has had her up on Secret Oath for three breezes at Churchill Downs since the 3yo filly returned to Kentucky following a third-place finish in the Cotillion at Parx on Sept. 24. This week, Michel is riding her during morning gallops.

“I think it’s good for him because I know the filly,” she said, “and it’s really good for me to participate at the Breeders’ Cup.”

In addition to the exercise duty, Michel will ride the Lukas-trained No Guilt in the second race Friday. It will be her first time on the grounds of a Breeders’ Cup.
Michel said the Kentucky Oaks winner felt good to her during the filly’s opening tour of the Keeneland surface. The Distaff will be Secret Oath’s first race at the Lexington track.
“She was fresh this morning and exciting,” Michel said. “She’s really lovely to train. She’s easy. She’s a perfect horse. She’s good and she’s really easy to train.”
Due to wet track conditions at Churchill Downs Monday, Lukas opted to skip Secret Oath’s final half-mile breeze for the Distaff. During her time on the track Wednesday, Lukas had Michel ask Secret Oath to briefly pick up the pace.

“We gave her a routine gallop, but from the quarter pole to the seven-eighths pole, we let her zip a little, just let her take a deep breath,” Lukas said.
Michel was the top apprentice in France in 2018, but started traveling after finding that she could not get enough mounts in her home country. She rode on the second-tier National Association of Racing circuit in Japan in 2019 and picked up experience on dirt. The pandemic slowed her career and she and her husband moved to the U.S. in late spring. She had her first mount on May 26 at Churchill Downs and has five wins from 83 starts.
Luis Saez will ride Secret Oath from post three in the Distaff. She is 15-1 on the morning line.