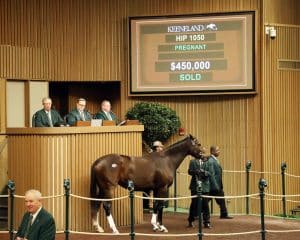 Brockovich, a 3-year-old daughter of Honor Code in foal to Charlatan, sold for $450,000 to Jody Huckabay, agent, to record the highest price Thursday during the fourth session of the Keeneland November Breeding Stock Sale. Lane’s End, agent, consigned Brockovich, who is a half-sister to Grade 2 winner Spielberg.

Out of Miss Squeal, by Smart Strike, Brockovich is from the family of Grade 1 winners Dream Deal, Crème Fraiche, Clear Mandate, Strong Mandate and Romantic Vision. Half-brother Spielberg is cataloged to Keeneland’s November Horses of Racing Age Sale on Nov. 17.

Bay Shore Stable spent $380,000 for the top-priced weanling on Thursday, a daughter of Twirling Candy who is the first foal out of multiple stakes winner Ours to Run, by Half Ours. Consigned by Nursery Place, agent, the filly is from the family of Grade 3 winner Dancing with Ruth.

Mulholland Springs paid $375,000 for Bicameral, a 3-year-old filly by Constitution who was third in the TVG Del Mar Debutante (G1). Consigned by Mill Ridge Sales, agent, she is out of the Songandaprayer mare Hunble Song and from the family of Grade 3 winners Around the Cape and Intensive Command.

Editor At Large (IRE), a 4-year-old winning, Grade 2-placed mare by Lope de Vega in foal to Raging Bull (FR), sold to Epona Bloodstock for the amount. She is out of What Say You, by Galileo (IRE), and from the family of Grade 1 winner Bolshoi Ballet (IRE) and Group 3 winner Southern France.

A weanling colt by Speightstown brought $360,000 from Sycamore Hall Farm/David Wade, agent. Consigned by Taylor Made Sales Agency, agent, he is out of Tempers Rising, by Bayern, and from the family of Grade 3 winner Wolf Brigade.

The leading buyer was Hunter Valley Farm, which acquired five horses for $835,000.

The November Sale resumes Friday and runs through Wednesday, Nov. 16, with all sessions beginning at 10 a.m. ET.

On Thursday, Nov. 17, Keeneland will present the November Horses of Racing Age Sale. The auction starts at noon.

All Keeneland sales are streamed live on Keeneland.com.

The Pressbox16 hours ago
New post added at The Pressbox - McLean's "Bonus Coverage" Handicapping for Gulfstream Park on Saturday, Feb. 4

The Pressbox17 hours ago
New post added at The Pressbox - McLean's Selections for Turfway Park on Saturday, Feb. 4