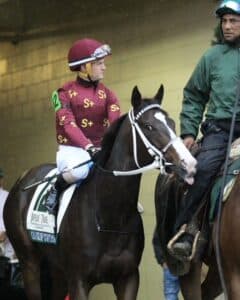 The field for the 1st running of the $75,000 Frederick P. Aime Memorial Stakes for fillies and mare came up stout. Going 5 ½ furlongs over the Stall Wilson turf course, the first and second place finishers from each of the preceding filly stakes turf sprints are entered, along with two-time graded stakes winner, Change of Control.

Perry Harrison’s Change of Control comes in on a two-race winning streak after pressing and passing to win the Autumn Day in November at Aqueduct and employing similar tactics in taking October’s Buffalo Trace (G3) at Keeneland. “CC”, as trainer Michelle Lovell affectionately calls her, also scored in Belmont’s Intercontinental (G3) earlier in the year. Three-quarters of the way to one million dollars in earnings, the nine-time-winner has scored six of those over Saturday’s 5 ½ furlong distance.

“She had a little break since Aqueduct,” Lovell said. “She was ready to run in the Menard, but the owner wanted to keep her fresh for the other races down the line we are trying to get to. She doesn’t have many works posted, we just did things different with her. She had a nice quarter-mile breeze down the stretch. I don’t put her on the wood–she doesn’t really enjoy it unless she has company. The question is will she love Fair Grounds’ turf.”

Tabbed as the second favorite on the morning line at 3-1, Change of Control will have Colby Hernandez back up, and potentially the tactical advantage of breaking to the outside of her main rivals, including the morning line favorite Elle Z (5-2) who got the best of CC in the 2020-202 Pan Zareta and Menard.

Leading through the first three calls in her last two outings, M Bar O’s Elle Z’s fate might hang on the age-old question: who’s going with me? Two back, she dueled and put away next-out winner Short Summer Dress and Kela’s Turn, setting scorching fractions only to be nipped at the wire by late-coming Brooke Marie. Chris Hartman’s speedy 5-year-old didn’t face the same sort of pressure last out in the Menard, winning by five lengths over closer She Can’t Sing and receiving a career highest Bris speed figure. Mitchell Murrill retains the mount and will be sending to the lead from post six.

“That’s just who she is,” Chris Hartmen said. “She ain’t gonna change.”

Entering on a three-race win streak including the Pan Zareta over Elle Z, Castleton Lyons’ Brooke Marie will have the rail with Adam Beschizza back up for trainer Eddie Kenneally. In the Pan Zareta she showed her multi-dimensionality, scoring her first turf victory from off the pace. Installed as the third-favorite at 7-2 by morning line odds maker Mike Diliberto, Brooke Marie has four wins from five turf sprint starts.

Last seen making a late run at Elle Z and finishing second in the Menard, Lothenbach Stable’s She Can’t Sing will make consecutive turf sprint starts for the first time in the 5-year-old mare’s career. Trainer Chris Block calls Jareth Loveberry back to ride She Can’t Sing (10-1 ML) from post two after encountering some trouble last time, being shuffled back early and bumped late.

“The last time she had a little trouble in traffic, the rider got off and said she was lugging into the rail,” longtime assistant trainer Martin Martinez said. “We ended up checking out her teeth and noticed a little sharpness in there, so we fixed that. We breezed on Saturday and it went real smooth and the rider [Jareth Loveberry] said it made a big difference.”

The remainder of the field with post position, jockey/trainer and morning line odds is as follows: Rigney Racing’s Pathetique (post three, James Graham/Philip Bauer, 20-1 ML), makes the first start of her 4-year-old campaign after trying the dirt and finishing third in a first-level allowance at Churchill Downs last November; Naveed Chowhan’s Euphoric (post four, Brian Hernandez Jr./Bernard Flint, 8-1 ML), has not won on the turf but looked impressive last out on the dirt sprinting at Indiana Downs, finishing second in the Clarksville; Sherman Racing’s Acting Out (post five, Deshawn Parker/Alan Sherman, 12-1 ML) has won twice sprinting on the turf but the last one came in November 2020 at Del Mar;  Oak Tree Stable’s Offspring (post seven, Marcelino Pedroza Jr./Louie Roussel III, 12-1 ML), makes her first turf sprint start after coming in third to Net a Bear last out;  Glen Hill Farm’s Drapes (post nine, Santo Sanjur/James Baker, 12-1 ML) makes her second start off a layoff after closing to finish second in the Abundentia turf sprint at Gulfstream; and Wayne Davis’ Onerollofthedice (post ten, Jose Riquelme/Shane Wilson, 15-1 ML) tries turf for the first time after finishing third last out to Cilla in the Orleans at Delta Downs.

The race is named in honor of long-time jockey agent Frederick Pierre Aime who passed away last year. Post time the Aime Memorial (race 8 of 9) is 5:20 p.m CT. Races begin at 1:05 pm CT and will include exotic animal racing. One heat each for Camels, Zebras and Ostriches, the exotic races are currently scheduled to run just after the 2:25 p.m. CT, 3:40 p.m. CT and 4:55 p.m. CT races respectively.

He Just Might…Go to Dubai

After crossing the finish line first in the Kenner on “Road to the Derby” Day, Just Might’s trainer Michelle Lovell considers shipping him to Dubai for the $1.5 million Al Quoz Sprint on the March 26 Dubai World Cup undercard. Impressively taking over early and winning the turf sprint by 2 ¾ lengths geared down late, Just Might was disqualified and placed 8th after the stewards ruled his move to the rail as impeding a foe’s ability to get out of harm’s way.  Winning or finishing 1st in 7 out of his last 8 starts, his lone miss came in the Phoenix (G2) when he grabbed his quarter making his move coming home and looked to have the run to get the lead.

“People don’t send me horses that could to go to Dubai,” Lovell said. “I had to raise one, which is crazy. I got to make every call in this horse’s career and it makes me feel good that we got this far. Yeah, Dubai,” Lovell mused and spoke to Just Might in his stall, “It’s a big step, Pappa. I think they have to give an official invite, too–they’ve asked me a few times to nominate. I think they want me to nominate.”

“It’s a straight 6 furlongs,” Lovell said. “We have nowhere to practice, but you know he probably will be okay. He runs his turns pretty good and he does make his little move right there sometimes. But he leans out in the turns so maybe he will be a little better going in a straight line. He leans out in every race just because he is going pretty fast and the turns on the turf are just sharper. He just runs.”

“He has really matured a lot this past year” Lovell said. “I think one of his best races maturing in his brain as a race horse, not just raw talent but figuring it out Was when he ran and beat Johnny Ortiz’ horse, Mucho, at Colonial. It was on the dirt which was a little scary for me, 6 furlongs which was stretching him out more. He actually dug in and won that race. And he lost his shoe somewhere in the race, too. He never took a bad step, he never tore his foot up but he did run the race with his left shoe off. And he dug in really hard–that day he grew up, really fighting that nice horse that Johnny has. And he broke the track record, which they don’t really say a new track record because they didn’t run a lot of races on the dirt there. He ran a 1:07 and change.”

Sign Up
The Pressbox · 5 hours ago
@thepressboxlts
Churchill Downs had nearly 50,000 on “Thurby!” Had over 100,000 attendance on Oaks Day. Had about 160,000 on Derby Day. How does that compare with any other venue? Just asking. @DerbyMedia @HorseRacingKK @EJXD2 @Gary_McIntyre56 @Smac300842 @DRFMcGee @DRFPrivman @kyholmarie
View on Twitter
1
6
The Pressbox · 10 hours ago
@thepressboxlts
Golden Pal Works at Keeneland in Preparation for Royal Ascot - https://t.co/IwkU4F7oAj https://t.co/9XUNhVcqZX
View on Twitter