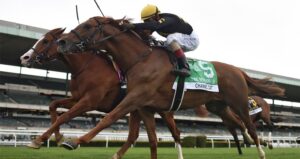 The chestnut fended off a confrontation from dual Grade 1-winner Gufo in late stretch to win the 11-furlong Man o’ War by a nose in his third start of this season. He arrives off a distant sixth in the Grade 2 Kentucky Turf Cup on September 11 at Kentucky Downs, where he was forwardly-placed but finished 9 ¾ lengths back of the winner Imperador.

As the lone millionaire in the Red Smith, Channel Cat boasts earnings in excess of $1.4 million through a ledger of 29-6-3-5. He captured the Grade 2 Bowling Green in July 2019 in wire-to-wire fashion while racing for Hall of Fame trainer Todd Pletcher.

Channel Cat will see an equipment change for Saturday’s engagement and will sport blinkers for the first time since May 2019 when finishing fourth in the Grade 3 Fort Marcy at Belmont.

“He lacked that little bit of spark in his past couple of starts and the addition of blinkers will help him do that,” Sisterson said. “In the race at Kentucky Downs, he didn’t make the lead and didn’t really finish up. I felt that there was something missing the last two races and I think blinkers will help.”

Hall of Famer John Velazquez will seek his fourth Red Smith triumph when piloting Channel Cat, who will carry 126 pounds from post 7.

Owned by Peter Brant, who captured the 1979 Red Smith with Waya, Serve the King enters off a sharp runner-up effort when completing a Brown-trained exacta in the Grade 1 Joe Hirsch Turf Classic Invitational on October 9 at Belmont. The 5-year-old Kingman bay garnered a career-best 100 Beyer Speed Figure for the effort, where he saved ground in fourth and made a move in between horses in mid-stretch to finish two lengths to stablemate Rockemperor.

Serve the King sports a consistent leger of 10-4-2-1 which includes a victory in the restricted John’s Call on August 25 at Saratoga and a troubled fourth in the Grade 1 United Nations on July 17 at Monmouth Park.

“The horse is training really well. It looks like a really solid race,” Brown said. “He’s coming off his best performance. He’s one that keeps developing and one that we thought a lot of. He’s well bred, very consistent and he’s in good form right now.”

The three-time winner has never finished off the board in 11 career starts and arrives off a rallying victory going nine furlongs four weeks ago over the Belmont inner turf. His other two victories include a third-out maiden triumph in August 2019 covering 1 3/16 miles at Saratoga and a 10-furlong score against winners off a nine-month layoff in June 2020 at Belmont.

“It’s a big step but we always thought he was a stakes horse all along,” Brown said. “He lost his way a little bit and needed to breakthrough. I thought his last race was a breakout performance. He’s got to step up but there aren’t too many options for a horse like him this time of year, so we’re giving it a shot.”

Pletcher will seek his third Red Smith coup when saddling Donegal Racing’s Shamrocket, who added a stakes win to his resume last out in the Point of Entry on October 24 at Belmont going 12 furlongs.

The 4-year-old Tonalist bay rounded out the trifecta in the July 5 Grand Couturier at Belmont ahead of a late-closing third in the Grade 2 Bowling Green on July 31 at Saratoga.

“I thought he got the trip we were looking for last time, it was nice to see him get that stake win,” Pletcher said. “I think the cutback is fine. He’s had some success going three turns and seems to run well no matter what you throw at him.”

Shamrocket will leave from post 5 carrying 124 pounds. under Javier Castellano.

Wertheimer and Frere homebred No Word, also for the Pletcher barn, was a last out fifth in the Grade 3 Knickerbocker on October 10 at Belmont. The 4-year-old Silent Name colt has earned graded stakes placings three times, including a runner-up effort in last year’s Grade 1 Belmont Derby Invitational.

Carrying 122 pounds, No Word will be piloted by Jose Lezcano post 9.

Michael Dubb, Madaket Stables, Morris Bailey, Wonder Stables and Michael J. Caruso’s Solider Rising will face elders for the first time while attempting to become the first 3-year-old to win the Red Smith since Monarch’s Maze in 1999. The son of Frankel strives to make amends after cutting back to nine furlongs and finishing fifth as the beaten favorite in the Grade 2 Hill Prince on October 23 at Belmont.

“I think he’s good enough to make the jump,” said Clement, who saddled previous Red Smith winners Flag Down [1995] and Grassy [2010]. “I thought he ran well last time, but we asked of him an impossible task being so far back.”

Known as the Edgemere Handicap until 1981, the Red Smith pays tribute to the late Pulitzer Prize winning author and sportswriter Walter Wellesley “Red” Smith, whose 55-year career in journalism covered a wide array of sports, including horseracing, for the New York Herald Tribune and the New York Times. The Red Smith will be carded as Race 9 on Saturday’s 10-race program. First post is 11:50 a.m. Eastern.

0
0
The Pressbox · 5 hours ago
@thepressboxlts
Ellis Park's Own Could Have Shot at This Year's Groupie Doll Stakes - https://t.co/atuLUmEYzb https://t.co/M2R5uyTu8s
View on Twitter