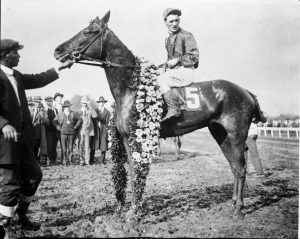 It’s been 100 years since Willis Kilmer’s famed Exterminatorrallied to a 1 ½-length victory in the 1922 Clark Handicap at Churchill Downs. At the time, his win would go down as one of the most memorable Clark victories in history.

Exterminator, the winner of the 1918 Kentucky Derby, was dubbed as the “greatest gelding in American racing,” according to an excerpt in the Lexington Herald Leader on April 9, 1922. Prior to starting his 7-year-old campaign, Exterminator was the fifth leading money winner in American racing, trailing only Man o’ War, Damino, Sysonsby and Colin.

Kilmer planned to run Exterminator in both the $10,000 Kentucky Handicap and $10,000 Clark Handicap in May at Churchill Downs and the $15,000 Independence and $10,000 Daniel Boone Handicap in June and July, respectively, at Latonia Race Track.

In the Clark, former track superintendent Tom Young was forced to work the track overnight after wet weather struck the area. The track was listed as “fast” for the Clark, which was run at 1 1/8 miles. In the 20 years prior, the Clark was run at 1 1/16 miles.

A field of 13 horses entered in the Clark with Exterminator drawing post No. 6 with Albert Johnson in the irons and was listed as the 133-pound high weight. The next highest allotted weight was Firebrand, who carried 120 pounds. The lowest was No. 1 Blarney Stone, who carried 97 pounds.

Three-year-old filly Lady Midcap set the early fractions in the Clark and nearly carried her speed to a wire-to-wire victory. Exterminator was able to rally three wide and catch Lady Midcap inside the sixteenth pole to win the Clark. Exterminator stopped the clock in 1:50, missing the track record by just a fifth of a second that was set Oct. 21, 1921 by Dr. Clark.

In a 1922 excerpt from Louisville’s Courier-Journal by C.J. Savage, Exterminator’s Clark was described as a “wonderful race that will linger forever in the memories of those who witnessed it.”

Exterminator used the 1922 Clark to vault to Horse of the Year honors in his 7-year-old campaign. The Clark victory was Exterminator’s 20th win from 35 starts. His backers were awarded pari-mutuel payouts of $3.20, $2.80 and $2.30.

Exterminator is known to many racing fans as “Old Bones” from his bony appearance. He shocked fans when won the 1918 Kentucky Derby at odds of 30-1.

Things have changed slightly in the past 99 runnings of the Clark. The race is now worth $750,000 and was moved to the Fall Meet in 1953. The Clark earned Grade I status in 2010 and in 2019 was made a regular stakes event rather than a handicap.

Huffman will be honored at the Louisville-based KTO’s 34th annual awards gala Saturday, Nov. 19 at the Kentucky Derby Museum, 704 Central Avenue adjacent to Churchill Downs. Cocktails begin at 6 p.m. (all times Eastern), followed by dinner at 7 p.m. Tickets, which include dinner and drinks, are available by contacting Marlene Meyer at (502) 458-5820.

The award recognizes individuals for outstanding contributions to Kentucky racing and sharing the passion exemplified by Jones, who spent 50 years on the Churchill Downs board, including eight as chairman during the iconic track’s resurgence. Warner Jones – the only breeder of a Kentucky Derby, Kentucky Oaks and Breeders’ Cup winner – was the inaugural award winner in 1988, six years before his death.

“It is incredibly special and humbling to be honored with this prestigious award that honors a horseman I greatly admired,” Huffman said.

Fresh off attending Western Kentucky University and the University of Louisville, Huffman intended to follow in the footsteps of his late father, trainer William G. “Blackie” Huffman. But after working for three years as assistant trainer to his father, the Louisville-native opted to accept an administrative position in the Ellis Park racing office in 1990 at his father’s urging. The rest, as they say, is history.

As a young racing official, Huffman learned under the tutelage of the late Howard Battle and Jerry Botts, gained remarkable experience and quickly rose through the racing office management ranks. His various roles at different racetracks around the country included being an Entry Clerk; Claims Clerk; Patrol Judge; Placing Judge; Paddock Judge; Stakes Coordinator at Fair Grounds and Churchill Downs; and Assistant Racing Secretary at Keeneland, Saratoga and Turfway Park.

Huffman was named Racing Secretary and Director of Racing at his hometown Churchill Downs Racetrack in 2006, and was promoted to Vice President of Racing for the Louisville racetrack in 2019.

In addition to his vital roles at Churchill Downs and Keeneland, Huffman serves on the American Graded Stakes Committee and Breeders’ Cup Selection Panel.

Huffman resides in Crestwood, Ky. with his wife Christi. Their two daughters are Abbey and Annie.

The Kentucky Thoroughbred Owners is an educational and social organization dedicated to the betterment of racing in the state. Membership is open not only to owners, but anyone interested in the sport, including prospective owners.

AROUND THE BACKSTRETCH – Tom Amoss’ chief assistant Joel Mejia recorded his first training victory when Hot Pastrami rallied for a 1 ¼-length victory in Thursday’s opener. Mejia was planning to start his training career following the Fall Meet but got an early start when Amoss began serving a seven-day suspension from the Indiana Horse Racing Commission. … It was another chilly morning of training at Churchill Downs where temperatures failed to get above the freezing mark. There were 112 horses that recorded workouts including Kentucky Jockey Club (GII) likely entrant Cyclone Mischief (five furlongs, 1:00.80) and Kentucky Derby (GI) 10th place finisher Zozos (five furlongs, 1:02.60).

DOWN THE STRETCH – The 20-cent Derby City 6 had a two-day carryover of $9,276 into racing Friday. First post was 1 p.m. and the Derby City 6 spanned Races 5-10. … The Backside Learning Center – an independent non-profit organization providing support and resources in a safe, welcoming environment for the diverse community of racetrack workers and their families – is holding its largest annual fundraiser, the 16th  annual “Benefit for the Backside: A Day at the Races,” on Friday in Churchill Downs’ Starting Gate Suites. This is a sold-out event. However, the Backside Learning Center will host an online, silent auction consisting of many unique horse racing and other hard-to-find items, including a Kentucky Oaks box for six; a speakeasy bourbon tasting tour for 20; a morning on the backstretch with jockey Ferrin Peterson; top-shelf bourbon packages and more. In addition, there will be a “Derby Week Suite for 40” raffle drawing including food and drink (a $7,500 value.). Visit www.benefitforthebackside.com for more information. … The season finale of “Inside Churchill Downs” will air Friday from 6-6:45 p.m. on ESPN 680/105.7. Those outside the Louisville region can listen to the broadcast on www.espnlouisville.com. Friday’s season finale is only 45 minutes because the Bellarmine at Clemson basketball broadcast starts at 6:45 p.m. … Pool 2 of the Kentucky Derby Future Wager along with the lone pool of the Kentucky Derby Sire Future Wager will run Nov. 24-27. The 40 betting interests for each pool will be released Monday. … For more information on the Churchill Downs Fall Meet, visit www.churchilldowns.com.