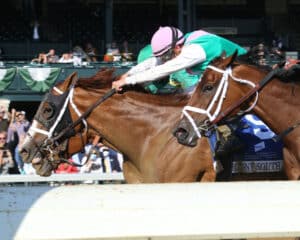 The Thanksgiving Day card at Churchill Downs has been a Louisville tradition since 1969. There are more than 7,000 turkey dinners scheduled to be served from executive chef Dave Danielson and his team. First post is 11:30 a.m. (all times Eastern) and the 1 1/8-mile Falls City will go as Race 11 at 4:22 p.m.

Trained by Brad Cox, Bonny South bypassed the Breeders’ Cup Distaff (GI) and stayed at Churchill Downs for the Falls City. The 4-year-old daughter of Munnings finished third in the $500,000 Spinster (GI) to multiple Grade I winner Letruska. Prior to her Spinster effort, Bonny South nearly defeated Letruska in the $600,000 Personal Ensign (GI) at Saratoga but came up a half-length short. Bonny South finished second in last year’s Falls City as the 4-5 favorite to Three Chimneys Farm and Walking L. Thoroughbreds’ Envoutante. Bonny South will be ridden in the Falls City by Florent Geroux from post No. 6.

Envoutante is slated to defend her title in the Falls City. The 4-year-old filly by Uncle Mo won the $150,000 Shawnee Stakes at Churchill Downs in late May. Following her 4 ¼-length victory, the Kenny McPeek trainee had back-to-back third-place finishes to Letruska in the $300,000 Fleur de Lis (GII) and Shedaresthedevil in the $400,000 Locust Grove (GIII). In her most recent start, Envoutante finished fifth in the Spinster. McPeek’s go-to rider Brian Hernandez Jr. will be in the saddle from post 4.

Kentucky West Racing and Clark Cooper’s eye-catching 6 ½-length debut winner Classic Causeway is on target to be one of the headliners in the $400,000 Kentucky Jockey Club (Grade II) at Churchill Downs following his swift five-furlong breeze in :59.40 Saturday.

Trained by Brian Lynch, Classic Causeway cruised to a front-running victory on debut at Saratoga at odds of 13-1. The chestnut son of the late Giant’s Causeway finished a tough-luck third in the $500,000 Breeders’ Futurity (GI) last out as the 9-5 favorite.

“He’s always been a horse that breaks sharp from the gate,” Lynch said. “We knew that going into the debut so it didn’t really surprise us he broke on top like he did but it’s always a pleasant surprise to see them win that impressively.

“Last out in the Breeders’ Futurity, he was hung wide from the gate and he battled pretty hard on the lead through fast fractions. I thought he gamely held on for third after the field closed in on him.

“Going into this start I’ve been trying to get him to relax a little bit in his training. I’ve worked him behind horses and in company so he doesn’t have to be on the engine.”

Classic Causeway is scheduled to be ridden by Joel Rosario.

STAKES PROBABLES – The 132nd Fall Meet from Churchill Downs will close with six stakes events over Thanksgiving weekend that will cumulatively award $2.45 million in purse money. Here are some of the likely starters, according to assistant racing secretary and stakes coordinator Dan Bork:

DOWN THE STRETCH – Racing continued Saturday at Churchill Downs for an 11-race program that began at 1 p.m. There was a $103,013 jackpot carryover in the 20-cent Derby City 6 that spanned Races 6-11. … Undefeated Kentucky Jockey Club (GII) contender Howling Time worked five furlongs in 1:00 Saturday at Churchill Downs. The colt is one of the top contenders for the 1 1/16-mile race following his impressive 3 ¼-length victory in last month’s $200,000 Street Sense. … For more information about the Fall Meet, visit www.churchilldowns.com.