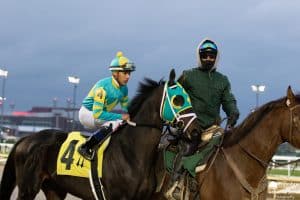 Keystone Field gave his trainer Mike Maker his record-extending 21st victory in the Claiming Crown, his first coming in 2007 when the event was held at Ellis Park.

“We bought him (in California) with this race in mind,” Maker said.

It also was a memorable Saturday for trainer Tom Van Berg who was victorious with two of his Claiming Crown starters:  The Queens Jules (Rapid Transit) and Petit Verdot (Canterbury Tom Metzen Memorial). Van Berg also won the first race on the Churchill Downs program with Justin’s Quest in an $8,000 claiming event.

“With our two syndicates – Grit to Glory and Chicken Fried Racing – we try to claim horses that we think we can keep around in the barn a little while and develop them,” Van Berg said. “My assistant Sammy(Almaraz) worked for my dad (Jack Van Berg) and learned a lot about horse’s feet. (The Queens Jules) had some foot issues and Sammy was able to work on his feet nonstop. It’s rare this time of year that horses blossom. Usually in the winter time they get their winter coats on them and are ready for a break. (The Queens Jules) was just breathing fire every morning and doing great.”

EARLY CHILUKKI STAKES PROBABLES – The featured race next week at Churchill Downs is the 37thrunning of the Grade III, $300,000 Chilukki Stakes, run on Saturday at one-mile.

Entries for the Chilukki will be taken Wednesday but here are some of the early probable entrants, according to their connections: Coach (trainer Brad Cox); Liberty M D (Ian Wilkes) and Mariah’s Princess(Phil Bauer).

Last year’s Chilukki was won by Juddmonte’s Obligatory, who ran a one-mile time of 1:34.80, the fastest clocking since Chilukki set the stakes record in 2000 at 1:33.57. Obligatory later went on to win the $750,000 Derby City Distaff presented by Kendall-Jackson Winery (GI) on Kentucky Derby Day.

AROUND THE BACKSTRETCH – Horsemen dealt with the frigid weather Sunday morning. Temperatures failed to make it above freezing in the Louisville area but the track continued to dry out throughout the morning following more than two inches of precipitation in the last 48 hours. The main track was harrowed following the 7:30 a.m. renovation break and the condition changed from “muddy” to “good” at 9 a.m. It will be rated “fast” for the 1 p.m. first race. … The Sunday work tab only included 38 horses with the adverse weather and track conditions, but among the horses that recorded a published workout was impressive 2-year-old maiden special weight winner Cyclone Mischief, who worked five furlongs in 1:02.80 in company with stablemate Winger for trainer Dale Romans. The Into Mischief colt could run next on the Nov. 26 Stars of Tomorrow II program at Churchill Downs, which is exclusive to 2-year-old races. … Jockey Corey Laneriecelebrated his 48th birthday Sunday. The veteran rider was scheduled to ride in Races 3, 6, 7, 8 and 10.

DOWN THE STRETCH – Racing continued Sunday with a first post of 1 p.m. The 20-cent Derby City 6 Jackpot had a carryover of $36,023 and a $6,987 carryover in the $1 Super Hi 5. … Wednesday is Senior Day at Churchill Downs where guests 60 and older can enjoy lunch on Millionaires Row for $26. Tickets can be purchased by calling (502) 636-4450. The menu includes wine-brined chicken, gooey mac and cheese, brown sugar carrots, blackened red potatoes and desserts. … The season finale of “Inside Churchill Downs” will air Friday at 6 p.m. on ESPN 680/105.7. Those outside the Louisville region can listen to the one-hour broadcast on www.espnlouisville.com. … For more information on the Churchill Downs Fall Meet, visitwww.churchilldowns.com.