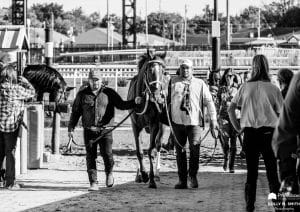 Rich Strike, the 80-1 upset winner of $3 million Kentucky Derby presented by Woodford Reserve (GI), has run four times since his historic victory on the first Saturday in May. The 3-year-old son of Keen Ice tested straight 3-year-olds two times following the Derby, a sixth-place effort in the $1.5 million Belmont Stakes (GI) and a fourth-place finish in the $1.25 million Travers (GI).

In his first try against older horses, Rich Strike finished a controversial second to Hot Rod Charlie in the $500,000 Lukas Classic (GII).

Rich Strike returned in the $6 million Breeders’ Cup Classic (GI) where he finished a troubled fourth after being forced extremely wide on the backstretch around Epicenter whose jockey Joel Rosario was pulling him up.

“After the Breeders’ Cup we weren’t originally thinking the Clark but he came out of the race so good,” trainer Eric Reed said. “In the Classic he was forced wide after Epicenter pulled up and he still managed fourth. He ran a good race and he’s trained well (at the Mercury Training Center) since then. We’re excited to get him back to his favorite track here at Churchill.”

Although the Clark is the next target on Reed’s radar for Rich Strike, he’s already thinking ahead to 2023. The veteran conditioner stated Rich Strike could run in the March 25 Dubai World Cup (GI).

Leon will have the return mount on Rich Strike for the Clark and the duo will break from post No. 4.

Among Rich Strike’s competition in the Clark are the top three finishers in the $350,000 Fayette (GII) at Keeneland: Gary and Mary West’s West Will Power, Juddmonte’s Fulsome and Willis Horton Racing’s Last Samurai.

In the Oct. 29 Fayette, West Will Power scored a 6 ¾-length front-running victory over his Brad Coxstablemate Fulsome, who finished three-quarters of a length in front of the D. Wayne Lukas-trained Last Samurai.

West Will Power, a homebred son of Bernardini, began his delayed 5-year-old campaign in August at Ellis Park as the 5-2 second choice in the $70,000 R.A. Cowboy Jones Stakes. In the one-mile event, West Will Power finished a head behind fellow Clark runner Injunction. In his next start on Sept. 28, West Will Power won a 1 1/8-mile allowance event at Churchill Downs prior to his dominate victory in the Fayette. Jockey Luis Saez will ride West Will Power from post 7.

Another top entrant in the Clark is Godolphin’s three-time winner Proxy. Trained by Mike Stidham, Proxy was on the Road to the Kentucky Derby in 2021 where he finished second in the $200,000 Lecomte (GIII) and $400,000 Risen Star (GII). The son of Tapit went to the sidelines following his fourth-place effort in the $200,000 Lexington (GIII). In his 4-year-old campaign, Proxy has yet to finish outside the top three with runner-up efforts in the $500,000 New Orleans Classic (GII) and $200,000 Blame and third-place finishes in the $300,000 Ben Ali (GIII) and $750,000 Stephen Foster (GII). Jockey Joel Rosario will ride Proxy from the rail.

The early National Weather Service forecast for Louisville calls for a high of 47 degrees Friday with a 30 percent chance of showers.

Wagering is available for the Clark on www.TwinSpires.com, the official wagering provider of Churchill Downs Incorporated and the Kentucky Derby.

Fans can watch racing from Churchill Downs on Friday on FS2’s “America’s Day at the Races” or by downloading the “Churchill Downs Live” app on smart TVs.

Trained by George Leonard III, California Angel gained many fans before she contested last year’s $1 million Breeders’ Cup Juvenile Fillies Turf (GI). The daughter of Kentucky Derby winner California Chrome finished 11th but was beaten just four lengths in the Juvenile Fillies Turf. Following her runner-up effort in the $75,000 Allen “Black Cat” LaCombe Memorial at Fair Grounds, Leonard gave the filly time on the sidelines until September when she finished a determined third in the $500,000 Dueling Ground Oaks. California Angel went on to finish fourth in the $600,000 Queen Elizabeth II Challenge Cup (GI) and second in the $300,000 Valley View (GIII), which she contested on just 12 days rest. Churchill Downs leading rider Tyler Gaffalionewill be aboard in the Mrs. Revere and the duo will break from post No. 6.

Jockey Brian Hernandez Jr. rode all three fillies in their last start and will be aboard Lovely Princess for the Mrs. Revere. In her last start, Lovely Princess rallied from seven lengths off the early pace in a first-level allowance event at Keeneland for a one-length victory. The daughter of Twirling Candy earned an 85 Brisnet Speed Rating for her win. She’ll break from post 7 in the Mrs. Revere.

Jockey Julien Leparoux will have the call on Lady Puchi from post 3 while Corey Lanerie will pick up on the mount on Sweet lady Ivanka out of post 5.

Another filly with a graded stakes victory on her résumé is Shortleaf Stable’s $150,000 Matron (GIII) winner Bubble Rock. Trained by Brad Cox, Bubble Rock scored a half-length win as a 2-year-old at Belmont Park in the Matron prior to her 12th-place effort in the Breeders’ Cup Juvenile Fillies Turf. As a 3-year-old, Bubble Rock sports a 2 ½-length score in the $125,000 Cincinnati Trophy Stakes, run over the Tapeta surface at Turfway Park. Bubble Rock will be ridden by Joel Rosario from post 4.

“Thanksgiving is always a special time when you get to spend it with family,” Catalano said. “I think I’m going to go back home for a few days to Chicago. I haven’t been home in a long time and it will be good to go see my wife, Renee, and the rest of my family. We always have the usual stuff but the key dishes are the oyster stuffing, baked mac and cheese and sweet potato casserole.”

“You start with the usual ‘trinity’ as they call it and combine it all together to cook down,” Catalano said. “I usually get some regular ground chuck and cook that and combine it with all of the carrots, onions and celery. You don’t need sirloin or anything special, just some good chuck.

“Then, of the key things I like to do is take stale bread and soak it in the oyster juices. Next, you mix in the oysters with the ground chuck, carrots, celery and onions. Finally, add the bread and mix it all together before baking in the oven.”

Catalano shared one final thought on cooking for the holiday seasons, “You always know going into the holidays cooking is going to be a lot of work but it’s all worth it in the end when you’re sitting around the table with your family.”

AROUND THE BACKSTRETCH – Jockey Florent Geroux took off his mounts Sunday to rest a sore left leg after he was tossed leaving the gate from his mount Chicago’s Gray in Race 6 Saturday. Geroux rode the remainder of the card Saturday. … Several Clark runners logged their final works Sunday morning at Churchill Downs prior to Friday’s featured event. Gary and Mary West’s West Will Power worked an easy half-mile in :50.60 outside Juddmonte’s Fulsome, who is also entered in the Clark. A few minutes earlier, J & J Stablesand Nicholas Vaccarrezza’s Injunction worked a solo half-mile in :50.60.

DOWN THE STRETCH – The 20-cent Derby City 6 had a four-day carryover of $18,418 into racing Sunday. First post was 1 p.m. and the Derby City 6 spanned Races 4-9. … Pool 2 of the Kentucky Derby Future Wager along with the lone pool of the Kentucky Derby Sire Future Wager will run Nov. 24-27. The 40 betting interests for each pool will be released Monday. … For more information on the Churchill Downs Fall Meet, visit www.churchilldowns.com.

Sign Up
The Pressbox · 22 minutes ago
@thepressboxlts
McLean's Selections for Turfway Park & My Charmer Stakes on Sunday, Dec. 11 - https://t.co/3JyrAy7kft https://t.co/nRt3v8FwKV
View on Twitter