Churchill Downs Barn Notes: Rich Strike Is Back in Town

Churchill Downs Barn Notes: Rich Strike Is Back in Town 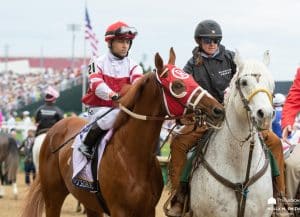 RED TR-Racing’s Kentucky Derby (Grade I) winner Rich Strike arrived at Churchill Downs on Wednesday from his home base of Mercury Equine Center in Lexington, Ky. to begin his preparation for the $1.5 million Belmont Stakes (GI) on June 11.

Rich Strike, who shocked the racing world at odds of 80-1 with his victory in the $3 million Kentucky Derby presented by Woodford Reserve, spent 10 days at Mercury Equine Center before his return to Churchill Downs. Rich Strike galloped at 5:45 a.m. Thursday and is scheduled to breeze Saturday at 7:30 a.m.

“When he got off the van you could see his chest puff up,” trainer Eric Reed said. “He absolutely loves it here. I think he knows when he’s here he has a job to do.”

“I just kept going back to how he wouldn’t be mentally ready to run in two weeks,” Reed said. “Our original plan if we didn’t get in the Derby was to run in the Belmont. So, we’re sticking with that plan.”

Rich Strike is scheduled to gallop at 5:45 a.m. Friday.

Saturday’s Louisville Stakes will go as the finale on the 11-race program with a post time of 5:58 p.m. (all times Eastern). First post is 12:45 p.m. Fans are invited to stay after the Louisville to watch the Preakness Stakes (GI) on the Big Board. Post time for the Preakness is 7:01 p.m.

Trained by Todd Pletcher, the Florida-bred Shamrocket began his 5-year-old campaign with a half-length victory in the $75,000 Sunshine Classic Stakes at Gulfstream. Previously, the son of Tonalist scored a half-length win in the $100,000 Point of Entry Stakes at 1 ½ miles over the Belmont turf course. Umberto Rispoli will ride Shamrocket from post No. 10.

Friday has a first post of 12:45 p.m. for a nine-race program. The card opens with a pair of 2-year-old maiden special weight contests. Race 1 is scheduled for five furlongs on the Matt Winn Turf Course and Race 2 will be contested at 4 ½ furlongs on dirt. Both races are worth purses of $120,000. The featured event is Race 8 where a wide-open cast of 12 colts and geldings will contest a conditioned allowance event at 1 1/16 miles on turf for a purse of $136,000.

Saturday is Preakness Stakes Day. Fans will be able to watch a live broadcast of the Preakness immediately after the last race. The Preakness has a scheduled post time of 7:01 p.m., about an hour after the finale from Churchill Downs.

Entries for Sunday’s nine-race card will be released Thursday afternoon.

Turf racing all weekend at Churchill Downs will be contested in Lane 2, 12 ft. from the inside rail.

CHURCHILL DOWNS RACING TO AIR ON FOX SPORTS 2 – Churchill Downs racing will air on Fox Sports 2 this week as part of “America’s Day at the Races” produced by the New York Racing Association. Here is the TV schedule for the next four racing days:

Fans will get expert analysis each race day from host Joe Kristufek along with several expert analysts such as Kaitlin Free, James Scully, Scott Shapiro and Brandon Stauble.

DOWN THE STRETCH – The Derby City 6 had a carryover of $17,664. The sequence spanned Races 3-8 Thursday. … Jockey Chris Landeros will now be represented by Chris Pipito. Landeros was previously represented by his brother-in-law Brodie Wilkes, who will travel to Australia and pursue a training career. Pipito also represents Mid-Atlantic based Feargal Lynch. … “Inside Churchill Downs” will return Friday at 6 p.m. on ESPN 680/105.7. The one-hour show hosted by Churchill Downs’ Darren Rogers and KevinKerstein, along with expert handicapper Scott Shapiro, will preview Saturday’s Preakness Stakes. Those outside the Louisville market can listen to a live stream on www.espnlouisville.com. … For more information about the Spring Meet, visit www.churchilldowns.com.