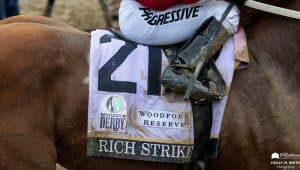 Rich Strike, who shocked the racing world at odds of 80-1 in the Kentucky Derby, returned to trainerEric Reed’s Mercury Equine Center in Lexington, Ky. the day after his victory in the “Run for the Roses.” Reed reported the colt will do his serious preparation at Churchill Downs as he did prior to the Derby. Rich Strike galloped about two miles Thursday morning before owner Rick Dawson released a statement about Rich Strike skipping the Preakness.

Dawson’s statement reads in part: “Our original plan for Rich Strike was contingent on the KY Derby, should we not run in the Derby we would point toward the Preakness, should we run in the Derby, subject to the race outcome & the condition of our horse, we would give him more recovery time & rest and run in the Belmont, or another race and stay on course to run with 5 or 6 weeks rest between races.

“Obviously, with our tremendous effort & win in the Derby it’s very, very tempting to alter our course & run in the Preakness at Pimlico, which would be a great honor for all our group, however, after much discussion & consideration with my trainer, Eric Reed & a few others, we are going to stay with our plan of what’s best for Ritchie is what’s best for our group, and pass on running in the Preakness, and point toward the Belmont in approximately 5 weeks.”

Jockey Sonny Leon, who rode Rich Strike to victory in the Kentucky Derby, is named on two mounts for Reed on Saturday night at Churchill Downs.

“We were the last ones to get in the race but arrived at the wire first,” Leon said. “Rich Strike left a mark on the whole world and on every heart.”

Reed is scheduled to join Darren Rogers, Kevin Kerstein and Scott Shapiro Friday at 6 p.m. on “Inside Churchill Downs.” Fans can listen to the one-hour radio show at www.espnlouisville.com or locally on ESPN 680/105.7.

Trained by Wesley Ward, Twilight Gleaming made her 3-year-old bow last month in the $200,000 Palisades at Keeneland where she finished second by three-quarters of a length behind Slipstream. She’ll be ridden Saturday for the first time by Tyler Gaffalione from post No. 5.

Saturday’s Downs After Dark theme is “Bourbon and Beats.” Gates open at 5 p.m. and tickets can be purchased online at www.ChurchillDowns.com. General admission and first floor seating is $14. Reserved box seats are $17 and premium dining options start at $82.

Friday’s first post is 12:45 p.m. and the nine-race program will feature the comeback of FTGGG Racing’s 2021 Ohio Derby (GIII) winner Masqueparade in a conditioned allowance event for a purse of $141,000. Post time for the featured eighth race is 4:22 p.m.

Fans will get expert analysis each race day from host Joe Kristufek along with several TwinSpires.comhandicappers such as Scott Shapiro, James Scully and Brandon Stauble.

CHURCHILL DOWNS RACING TO AIR ON FOX SPORTS – Churchill Downs racing will air throughout the Spring Meet on the Fox Sports family of networks as part of “America’s Day at the Races,” which is produced by the New York Racing Association. Racing this week from Churchill Downs will air at the following times:

DOWN THE STRETCH – Turf racing on Thursday and Friday will be in Lane 4, 36 ft. from the inside rail. The temporary rail will be taken down for racing Saturday and Sunday and be conducted in Lane 1. … “Inside Churchill Downs” will return to the airwaves Friday from 6-7 p.m. on ESPN 680/105.7. Fans can listen to a livestream of the one-hour broadcast on www.espnlouisville.com. The podcast will be uploaded shortly after the show to the station’s website. … The jackpot for the 20-cent Derby City 6 restarted for racing Thursday. There was a mandatory payout on Kentucky Derby Day which resulted in a payout of $161,631. The sequence began in Race 3 at 5:58 p.m. … For more information about the Churchill Downs Spring Meet, visitwww.churchilldowns.com.