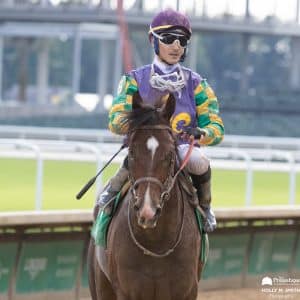 The “Prep Season” on the Road to the Kentucky Derby presented by Woodford Reserve will resume Saturday at Churchill Downs where nine juveniles with aspirations on making a start on the first Saturday will contest the $400,000 Kentucky Jockey Club (Grade II).

The Kentucky Jockey Club is the centerpiece on the “Stars of Tomorrow II” program that will feature 12 races exclusive to 2-year-olds. The 1 1/16-mile event will go as Race 11 of 12 and award the top five finishers points on a 10-4-3-2-1 scale.

While fans watch and wager on the action Saturday, there is another opportunity to make a future wager on the Kentucky Derby. The wager, which closes Sunday at 6 p.m. (all times Eastern), features 37 individual betting interest, one interest for “All Fillies from the 2020 Foal Crop” and one interest for “All Other Colts and Geldings from the 2020 Foal Crop” that aren’t featured in the pool.

As of Friday morning, “All Others” was the 3-5 favorite while Breeders’ Cup Juvenile (GI) winner Fortewas the co-individual favorite with Breeders’ Futurity (GI) runner-up Loggins at 12-1.

In the Kentucky Jockey Club, Instant Coffee was made the slight 5-2 morning line choice over the $300,000 Iroquois (GIII) winner Curly Jack, who was the second choice at 3-1.

JAPAN ROAD TO KENTUCKY DERBY SET TO BEGIN SATURDAY MORNING – The Japan Road to the Kentucky Derby will begin at 12:15 a.m. (all times Eastern) Saturday at Tokyo Racecourse whereYuji Hasegawa’s maiden winner Plavi (JPN) was the 5-2 favorite against nine Japanese-breds in the $220,325 Cattleya Stakes.

The Cattleya, run at about one mile, will award the top five finishers points on a 10-4-3-2-1 scale for the stand-alone Japan Road to the Kentucky.

Trained by Haruki Sugiyama, Plavi broke his maiden Oct. 1 at Chukyo Racecourse, located about four hours west of Tokyo. The chestnut son of Duramente will be ridden in the Cattleya by Keita Tosaki from post No. 2

Several horses that entered the Cattleya have breeding familiar to many North Americans. There are two sons of Lukas Classic (GIII) winner Mind Your Biscuits: Mirror of Mind (JPN) (5-1) and Toa Raiden(JPN) (11-1).

The Cattleya will go as Race 9 of 12 prior to the featured Capital Stakes in Race 11. Sunday’s card at Tokyo features the Grade I Japan Cup worth a purse of approximately $5.5 million.

The Commonwealth Turf, run at 1 1/16 miles on the Matt Winn Turf Course, will go as Race 11 of 12 with a post time of 5:56 p.m. (all times Eastern.) Sunday’s Fall Meet closing day program will get underway at 1 p.m. and feature mandatory payouts in all wagers including the 20-cent Derby City 6 Jackpot.

Trained by Chad Brown, the improving Running Bee cruised to a maiden-breaking score Aug. 10 at Saratoga when he circled past eight rivals to win by 3 ¾ lengths under jockey Manny Franco. Following an unsuccessful try at Kentucky Downs in the $750,000 Dueling Grounds Derby (GIII), the son of English Channel returned to allowance company at Keeneland where he easily defeated nine rivals in a front-running score under jockey Tyler Gaffalione and earned a professional 91 Brisnet Speed Rating. Gaffalione will once again have the call from post No. 3.

The Commonwealth Turf is scheduled to be contested in Lane 1 of the turf course.

Wagering is available for the Commonwealth Turf and every race from Churchill Downs onwww.TwinSpires.com, the official wagering provider of the Kentucky Derby and Churchill Downs Incorporated.

DOWN THE STRETCH – Friday’s 12-race program from Churchill Downs got underway at 1 p.m. and featured the Grade I, $750,000 Clark presented by Norton Healthcare and Grade II, $300,000 Mrs. Revere. There was a $7,973 carryover in the 20-cent Derby City 6 Jackpot which spanned Races 7-12. First post was 1 p.m. … There will be a mandatory payout on all wagers Sunday for Closing Day of the Fall Meet. First post will be 1 p.m.

The Pressbox16 hours ago
New post added at The Pressbox - McLean's "Bonus Coverage" Handicapping for Gulfstream Park on Saturday, Feb. 4

The Pressbox17 hours ago
New post added at The Pressbox - McLean's Selections for Turfway Park on Saturday, Feb. 4