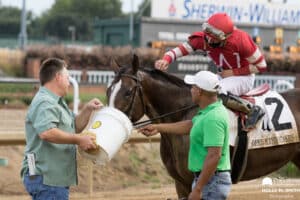 Trainer Greg Foley’s Barn 11 was buzzing with excitement Sunday morning following Sconsin’s hard-fought victory over Bell’s the One in Saturday’s $300,000 Open Mind (Listed) at Churchill Downs. Now, Foley and his team are eyeing a trip to Del Mar and the $1 million Breeders’ Cup Filly & Mare Sprint (Grade I).

“She’s just a classy filly,” Foley said. “Neil (Pessin)’s mare (Bell’s the One) is a really solid horse and they really battled last night. You get a little worried when the field is short about what the pace will be. They went quick last night and that helped us. In her two starts this year against Gamine they went almost two seconds slower for the opening quarter-mile.”

“The guys with Lloyd Madison (Farms IV) have a really solid broodmare band going and it’s really exiting for this filly to now have three stakes wins. I’m thrilled for those guys.”

The winner’s circle was filled with about 30 members of Foley’s friends and family. However, one family member was missing and that was his son and assistant trainer Travis, who was out of town on his bachelor party ahead of his Oct. 2 wedding.

“We would’ve loved to be there but we definitely had a good celebration after she won,” Travis Foley said. 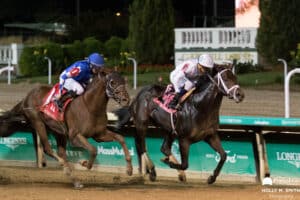 “I thought it was an impressive performance in only his second start for him to jump up like that and progress to two turns,” Hall of Fame trainer Todd Pletcher said. “I was very pleased with him. Hopefully he continues to make progress. I haven’t talked to Elliott (Walden) and the WinStar team about his next plans but I would probably think we would train him up to the Breeders’ Cup.”

Major General debuted at 6 ½ furlongs at Saratoga where he recorded a front-running victory. In Saturday’s Iroquois the Constitution colt rallied from 4 ½ lengths off the early pace. He’s scheduled to ship back to his New York base Sunday. 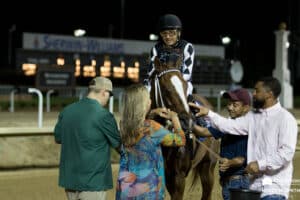 “Pappy is the greatest,” Lovell said. “He’s so kind and generous. He’s like family to me and that’s what makes it so special when you have a horse like this. You get to celebrate with family.”

Just Might, a 5-year-old son of Justin Phillip, is out of Lovell and Griffon’s mare Dynamite Babe. Griffon and Lovell have been partners on several horses since the beginning of Lovell’s training career in the early 2000s.

Griffon, a Friendswood, Texas native, has been able to travel to Churchill Downs in the past but described his latest trip as, “the best one of his life.”

RECENT BRISSET MAIDEN WINNERS GREAT ESCAPE, YUUGIRI POSSIBLE FOR STREET SENSE, RAGS TO RICHES – Trainer Rodolphe Brisset began the September Meet with two trips to Churchill Downs’ Woodford Reserve Winner’s Circle for promising juveniles Great Escape and Yuugiri.Brisset reported Saturday night that both horses could be possible to make their next starts at Churchill Downs in the $200,000 Street Sense and $200,000 Rags to Riches, respectively, on Oct. 31.

On Friday, Sekie and Tsunebumi Yoshihara’s homebred filly Yuugiri cruised to a 7 ¼-length romp at odds of 9-1. Just 24 hours later, WinStar Farm and Siena Farm’s colt Great Escape broke his maiden by 2 ¼ lengths at odds of 9-5.

The Street Sense and Rags to Riches kick off the start of the Fall Meet at Churchill Downs as the headliners on “Stars of Tomorrow I.”

STAKES PROBABLES – Saturday’s stakes trio at Churchill Downs will feature the 46th running of the $275,000 Dogwood (Listed) along with the inaugural editions of the $275,000 Harrods Creek and $275,000 Bourbon Trail. The following horses are probable to enter according to Churchill Downs’ Assistant Racing Secretary and Stakes Coordinator Dan Bork:

Entries for Saturday’s 11-race card will be taken Wednesday.

DOWN THE STRETCH – Racing continued Sunday at Churchill Downs with a first post of 12:45 p.m. There was a $35,513 carryover in the 20-cent Derby City 6 that spanned Races 5-10. … Hidden Brook Farmand Black Type Thoroughbreds’ $300,000 Pocahontas (GIII) hero Hidden Connection earned an 89 Brisnet.com speed rating for her 9 ¼-length romp. Hidden Connection gave her jockey Reylu Gutierrez his first victory at Churchill Downs. The 25-year-old rider was on the backside at trainer Bret Calhoun’s barn early Sunday morning working horses. “Fillies like that are what it’s all about. Now, we have to keep working hard,” Gutierrez said. … Racing will resume Thursday at Churchill Downs for the penultimate Twilight Thursday of the calendar year. The eight-race card features $1 Blue Moon and domestic beer, local food trucks and live music from hip-hop artists Kr8vN8vs. First post is 5 p.m. For more information and to purchase tickets, visitwww.churchilldowns.com/tickets.