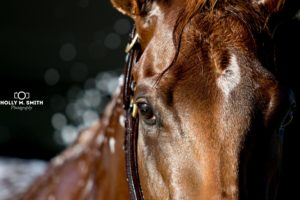 “She’s simply a remarkable mare and has meant the world to my career,” Cox said. “She’s given her owners a lot of joy throughout her career. We knew as a barn we weren’t going to do anything with her if she wasn’t 100 percent. It took us awhile to get her back last year. She’s rewarded us in such a big way. She owes us nothing and will always be special to us. She was our first (Kentucky) Oaks winner and Breeders’ Cup winner and a multiple champion. She matured a lot throughout her career. Going into the Breeders’ Cup (in 2020) she trained with such a purpose each day. It was hard to imagine her works being better than when she was a 3-year-old but she was more aggressive in her training and really blossomed on the racetrack.”

Owned in partnership by My Racehorse Stable, Spendthrift Farm and Madaket Stables, MonomoyGirl – a sure-fire future Hall of Famer – retired Wednesday with $4,776,818 in career purse earnings with an outstanding record of 17-14-3-0.

The speedy daughter of Tapizar grew to stardom after starting her career a perfect 3-for-3. Following a neck defeat in the 2017 Golden Rod (GII), Monomoy Girl stormed to victory in five straight races including the 2018 Longines Kentucky Oaks (GI). She ended her 3-year-old campaign with one-length win in the Breeders’ Cup Distaff (GI). At the end of the season, she was awarded the Eclipse Award for outstanding 3-year-old filly.

Monomoy Girl spent the next 18 months on the sidelines due to injury but returned for her 5-year-old campaign which included victories in the La Troienne (GI) and Breeders’ Cup Distaff (GI). She was awarded the Eclipse Award for Older Dirt Female in 2020.

Monomoy Girl raced at eight different racetracks and recorded victories on the dirt and turf. Jockey Florent Geroux was partnered with Monomoy Girl for 16 starts. Marcelino Pedroza rode her to victory in her debut at Indiana Grand.

Monomoy Girl was purchased at the 2016 Keeneland September Yearling Sale by BSW Bloodstock and agent Liz Crow for $100,000. Crow reflected Wednesday on social media about the career of Monomoy Girl.

“(She) was the mare of a lifetime,” Crow said. “There is truly no way to thank her for what she’s done for everyone involved. Monomoy Girl brought people together and changed lives.”

Cox stated Monomoy Girl will be retired to Spendthrift Farm.

The seven-furlong Dogwood drew a compact field of seven 3-year-old fillies and was carded as Race 8 with a post time of 4:22 p.m. (all times Eastern). Saturday’s 11-race card features a stakes trio including the inaugural runnings of the $275,000 Bourbon Trail and $275,000 Harrods Creek, both for 3-year-olds. First post is 12:45 p.m.

Trained by Al Stall Jr., Carribean Caper began her career at Fair Grounds with a scintillating eight-length score. The daughter of Speightstown then cruised to a 4 ½-length first-level allowance victory at Keeneland. Following three months away from the races, Carribean Caper returned in a conditioned allowance event at Ellis Park where she dominated four rivals by 4 ½ lengths. In her most recent start, the Kentucky-bred defeatedMagic Quest by one-length in the $100,000 Audubon Oaks at Ellis. Colby Hernandez, who has been aboard Carribean Caper for all four of her lifetime starts, will ride from post No. 2.

The Saturday stakes action will conclude in Race 10 for the seven-furlong Harrods Creek. Clearview Stables’ $250,000 St. Louis Derby runner-up Irish Unity was slated as the tepid 3-1 favorite in the field of 10 3-year-olds.

THIS WEEK AT CHURCHILL DOWNS – Racing resumed Thursday at Churchill Downs with a first post of 5 p.m. for Twilight Thursday presented by Blue Moon. The eight-race program featured a $134,000 conditioned allowance event where Lael Stable’s Reagan’s Edge was tabbed as the 5-2 favorite as she dropped in class from graded stakes competition. Fans were able to enjoy $1 Blue Moon and select domestic draft beer, local food trucks and live music from hip hop group Kr8vN8vs.

Racing Friday-Sunday will have first posts of 12:45 p.m.

Tickets for adults and children age 3 and up are $10 when purchased online in advance atwww.ChurchillDowns.com, and include unlimited access to all kid-friendly activities through 5 p.m. Churchill Downs is also offering a Family Four Pack that includes four Family Adventure Day reserved seat tickets: $36 (first-floor reserved) or $44 (third-floor reserved).

DOWN THE STRETCH – Jockeys Jon Court, Florent Geroux and Ricardo Santana Jr. will be at Parx on Saturday for the Pennsylvania Derby card. On Sunday, Court and Santana will then travel to Remington Park for their Oklahoma Derby program. They’ll be joined in the jockey’s quarters by fellow local riders David Cohen, James, Graham, Reylu Gutierrez, Joe Rocco Jr. and Joe Talamo. … “Inside Churchill Downs” will return to the airwaves Friday at 6 p.m. on ESPN 680/105.7. The one-hour horse racing program can be streamed online at www.espnlouisville.com. … For more information about racing this week at Churchill Downs and to purchase tickets, visit www.churchilldowns.com/tickets.