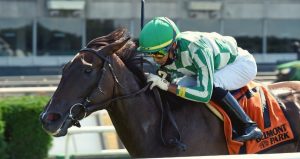 Allen Stable’s Civil Union made the lead at the top of the lane and kicked clear of favored Olympic Games to capture the $80,000 River Memories, the final stakes of the 25-day Belmont Park spring/summer meet.

Beau Belle continued to dictate the tempo down the backstretch through a half-mile in 50.07 with Pallas Athene pressing her early foot followed by Civil Union and a ground-saving Lemon Zip in fourth.

Ortiz urged Civil Union into contention mid-way through the final turn with Olympic Games, piloted by Irad Ortiz, Jr., following her run as the field converged on the longtime pacesetter. A game and determined Beau Belle dug in but Civil Union edged clear and found another gear when confronted by Olympic Games to secure the 1 3/4-length win in a final time of 2:29.49.

“I had enough. I knew I would have enough horse down the lane. I just wanted to see how close they were,” said Ortiz. “I saw Irad right next to me approaching the quarter-pole. I knew I had to start moving on her. When I asked her the first time, she moved beautifully. She’s a very big filly, so I knew the distance wasn’t going to be a problem for her.”

Civil Union was transferred to the care of Hall of Famer Shug McGaughey for her 2020 campaign in which she has won two-of-three starts, including an allowance score on June 21 at Belmont.

McGaughey said a sharp ride from Ortiz made all the difference.

“He [Jose Ortiz] said that she had plenty of horse and was going nice and relaxed the whole way,” said McGaughey. “He had her in perfect position behind that slow pace. I think Jose made a big difference there. I think he rode a perfect race.”

NYRA Bets is the official wagering platform of Saratoga Race Course, and the best way to bet every race of the 40-day summer meet. Available to horseplayers nationwide, NYRA Bets is currently offering a $200 new member bonus in addition to a host of special weekly offers. The NYRA Bets app is available for download today on iOS and Android at NYRABets.com.