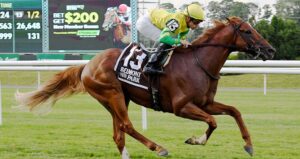 Trainer Christophe Clement will saddle City Man and Therapist – the one-two finishers last out in the West Point presented by Trustco Bank – in Friday’s $125,000 Ashley T. Cole at Belmont Park.

Clement has won the nine-furlong inner turf test for New York-bred 3-year-olds and up on two occasions with Lubash scoring in 2012 and 2014.

City Man, bred by Moonstar Farm, made the lead at the stretch call under returning rider Joel Rosario and outdueled Therapist for the narrow win.

City Man, who sprinted to victory in the 2019 Funny Cide at 6 1/2-furlongs on the Saratoga main track, also secured stakes success in the 1 1/16-mile Gio Ponti in November on the Big A turf.

Clement said the West Point will set the versatile City Man up for a return to dirt in the $300,000 Empire Classic, a nine-furlong test for state-breds on October 30.

“He’s a good horse. I’m going to run him here and then get him ready for the Empire Classic back on dirt,” Clement said. “He’s always trained like a good horse.”

Clement said he’s concerned about Therapist’s ability to handle the distance and the prospect of inclement weather on Friday.

“There a question mark on the mile and an eighth, especially on soft turf. He’s more suited for a mile and a sixteenth, he’s that kind of horse,” said Clement who co-bred Therapist with Oak Bluff Stable. “He is doing very well at the moment. I thought he ran very well last time out. I’m a little concerned about the weather, but there’s not much I can do about that.”

The popular chestnut has thrived on the Belmont turf with five wins from 12 starts, including stakes scores in each of the last four years in the 2017 Awad, 2018 NYSSS Spectacular Bid, 2019 Elusive Quality and last year’s First Defence.

“He’s been a fun horse to have in the barn the past few years,” Clement said. “He’s a lovely horse and I’m lucky to train him.”

City Man will exit post 2 under Rosario, while Therapist will emerge from the inside post under Irad Ortiz, Jr.

Edward Messina and William Butler’s Sanctuary City, a 4-year-old Temple City bay, rallied from last-of-7 to complete the trifecta in the West Point.

Trained by James Ferraro, Sanctuary City enjoyed a three-race win streak beginning with a half-length score in a state-bred turf allowance in November at Aqueduct and followed with a state-bred optional claiming score on the Big A turf in April sprinting six furlongs in his seasonal debut. He completed the set with a last-to-first rush to win an open one-mile optional-claiming event on the Belmont turf in May.

Sanctuary City entered the West Point from off-the-board finishes in the Grade 3 Poker [4th] in June at Belmont and the Grade 3 Forbidden Apple [8th] in July at the Spa.

Kendrick Carmouche has the call from the outermost post.

Rounding out the field are Graded On a Curve [post 3, Javier Castellano], who was fourth last out in the West Point for trainer Chad Brown; and maiden winner Lord Flintshire [post 4, Jose Ortiz] for conditioner Jorge Abreu.

Three Jokers and Tiergan are entered for the main-track only.

Slated as Race 3, the event pays tribute to the late Ashley T. Cole, who served as chairman of the New York State Racing Commission and played a critical role in the formation of the New York Racing Association.

Also featured in Race 8 on the nine-race card is the $150,000 Joseph A. Gimma at seven furlongs on the main track for state-bred juvenile fillies. First post is 1 p.m. Eastern.