Coolmore To Sponsor G1 Turf Mile at Keeneland On Oct. 8

Coolmore To Sponsor G1 Turf Mile at Keeneland On Oct. 8 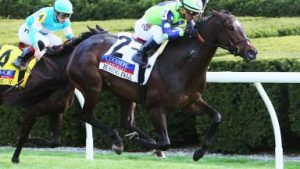 Keeneland announced today that Coolmore, the globally powerful Thoroughbred breeding operation represented in America by Ashford Stud near Lexington, will sponsor the Turf Mile (G1), to be held Saturday, Oct. 8, as part of the Fall Meet’s opening FallStars Weekend. The Coolmore Turf Mile, a race for 3-year-olds and up, will offer a purse of $1 million in 2022.

This fall’s Coolmore Turf Mile will mark a milestone as the 25th running of a Keeneland stakes sponsored by Coolmore. The operation previously sponsored the Lexington (G3) from 1998-2015 and the Jenny Wiley (G1) from 2016-2021.

“Coolmore is a long and loyal supporter of Keeneland from the sales ring to the race track, and we appreciate their strong commitment to racing,” Keeneland Vice President of Racing Gatewood Bell said. “The Turf Mile is one of the most prestigious races in the world, and we are excited to have an internationally respected partner such as Coolmore as its sponsor.”

Owned by John Magnier, Coolmore is one of the world’s largest Thoroughbred breeding operations, with farms in Ireland, America and Australia. Coolmore America is based at Ashford Stud in Versailles, Kentucky, which is home to such leading sires as Triple Crown winners American Pharoah and Justify, Uncle Mo, Mendelssohn, Munnings and Practical Joke.

The Coolmore Turf Mile marks its 37st running this fall, having first been held in 1986 as the Keeneland Breeders’ Cup. Notable recent winners are two-time Horse of the Year Wise Dan (2012 and 2014), three-time champion grass horse Gio Ponti (2010-2011) and such standouts as Bowies Hero, Court Vision, Miss Temple City and Next Shares.