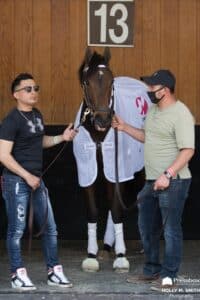 A few inches separated trainer Brad Cox from sweeping Oaklawn’s two-turn stakes series for older fillies and mares in 2021. Now, Cox will try to pick up where he left off when he sends out program favorite Coach in Saturday’s $150,000 Pippin at 1 mile.

Cox won the last year’s Pippin with Getridofwhatailesu, then captured the $250,000 Bayakoa Stakes (G3) with two-time Eclipse Award winner Monomoy Girl and the $350,000 Azeri Stakes (G2) with Shedaresthedevil. Monomoy Girl, in what would be her final career start, was beaten a nose by Letruska in the $1 million Apple Blossom Handicap (G1) to deny Cox a four-race sweep.

“She was just a horse that we had run a lot, her 2-year-old season and then throughout her 3-year-old season, trying to get her into the Oaks,” Cox said. “We got her to the Oaks. She just needed a break and she got it.”

Coach began her career with three consecutive victories, including the $98,000 Rags to Riches Stakes in October 2020 at Churchill Downs. Coach went through Oaklawn’s series of Kentucky Oaks points races last year, finishing second in the $200,000 Martha Washington Stakes, fifth in the $300,000 Honeybee Stakes (G3) and third in the $600,000 Fantasy Stakes (G3). Her allowance victory last month at Oaklawn snapped a five-race losing streak.

Miss Bigly has kept fast company in her career, facing the likes of Monomoy Girl, As Time Goes By and Envoutante in the Midwest and Southern California.

An allowance winner at 1 mile last April at Oaklawn, Miss Bigly exits a third-place finish in the $300,000 Chilukki Stakes (G3) Nov. 20 at Churchill Downs. The Chilukki was also a mile. Miss Bigly has five published workouts at Oaklawn since Dec. 4.

“I think she’s coming into the race in good shape,” said Miss Bigly’s Southern California-based trainer, Phil D’Amato, who has nine horses at Oaklawn. “I believe she won on a wet-fast track at Oaklawn last year, so I don’t think if it rains, we’ll have any issues there. Her last couple of breezes have been very sharp, with Martin Garcia breezing her.”

Multiple stakes winner Breeze Rider won seven races in 2021, but has done her best work on turf or a synthetic surface for trainer Steve Manley. Josie was an allowance winner at the 2021 Oaklawn meeting for Cox. She is now with Hall of Fame trainer Steve Asmussen.

W W Fitzy adds blinkers for 2020 Oaklawn training champion Robertino Diodoro after running fourth behind Coach and Wellington Wonder Dec. 17 at Oaklawn. She was claimed out of the race for $62,500.

“We’re trying to get some speed back in her,” Diodoro said, referring to the equipment change. “Training good. We’ll see.”