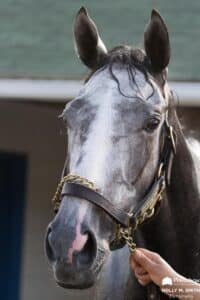 (Crazy Beautiful is just that / Photo by Holly M. Smith)

Multiple graded stakes-winning Crazy Beautiful made an impressive seasonal turf debut last out but will return to more familiar surroundings on a dirt track as part of an eight-horse field of 3-year-olds fillies competing at 1 1/8 miles in the Grade 3, $200,000 Comely on Friday at Aqueduct Racetrack.

Crazy Beautiful, owned by Phoenix Thoroughbred III, had racked up all five of her stakes wins on dirt before trainer Kenny McPeek moved the Liam’s Map daughter back to turf for the first time since her successful career debut in July 2020. Crazy Beautiful ran a competitive second, finishing one length behind winner Navratilova, in the 1 1/16-mile Grade 3 Valley View on October at Keeneland.

After posting three graded stakes wins in 1 1/16-mile main track races earlier this campaign – capturing the Grade 2 Gulfstream Park Oaks in March, the Grade 2 Summer Oaks in May at Santa Anita and the Grade 3 Delaware Oaks in July at Delaware Park – McPeek said the return foray to grass was prompted by scheduling limitations more than a desire to deviate from what had been a successful sophomore blueprint for the Kentucky bred.

“There weren’t any options for straight 3-year-old fillies at the time,” McPeek said. “She was doing well and she continues to do well after her last start. It looks like the Comely will be a good spot for her.”

Crazy Beautiful has compiled a 4-2-0 record in eight starts in 2021. Her only off-the-board efforts have come against top-flight competition, with a 10th in the Grade 1 Kentucky Oaks on the eve of the Kentucky Derby on April 30 at Churchill Downs and a sixth-place showing in the Grade 1 Alabama in August at Saratoga Race Course.

McPeek said the 72nd edition of the nine-furlong Comely could facilitate a start in the Grade 1, $300,000 American Oaks on the grass that is slated for Opening Day of Santa Anita’s winter/spring meet on December 26.

“The goal is to get her to the American Oaks at the end of the year,” he said. “The Valley View gave me a test drive that she can handle the turf just fine. She’s shown previously that she can run on anything.”

Three Diamond Farm’s Army Wife has finished in the money in each of her last eight starts dating to October 2020 for trainer Mike Maker. The Declaration of War filly won the prestigious Grade 2 Black-Eyed Susan on the eve of the Preakness at Pimlico before posting a 3 3/4-length score in the Grade 3 Iowa Stakes in July at Prairie Meadows.

Elevated to Grade 1 levels, Army Wife held her own, earning black type twice, starting with a third-place effort behind Clairiere and winner Malathaat in the Alabama before garnering another third in the Cotillion behind Obligatory and a winning Clairirere in September at Parx.

Victories in her last four starts – and five wins in her last six races – has earned Vegas Weekend a seat at a higher stakes table as she makes her first stakes appearance in her 12th career start.

Trained by Rob Atras, the Mineshaft filly has won at distances ranging from 6 1/2 furlongs to 1 1/8 miles, which she accomplished in an off-the-turf claiming contest in August at the Spa.

Claimed for $50,000 out of a win traveling nine furlongs on August 19 at Saratoga, Vegas Weekend bested optional claimers by three-quarters of a length off the layoff going seven furlongs on November 12 at the Big A.

Atras said he wasn’t worried about the cut back in distance last out in Vegas Weekend’s first start for new connections.

“When she won the mile and an eighth, we were hoping to keep her going further but when she works in the morning she shows a pretty good turn-of-foot,” Atras said. “I wasn’t worried about running her seven-eighths.”

Owned by Sanford Goldfarb, Alan Khan and Koshanostra Stables, Vegas Weekend seems ready to wheel back after another positive effort, her conditioner said.

“I think having that race is good for her,” Atras said. “It’s a little bit quick back, but she’s a nice, sound filly and she came out of the race good.”

Rigney Racing’s Played Hard, fifth in the Alabama over the summer going 1 1/4 miles, garnered a personal-best 91 Beyer Speed Figure for her runner-up effort last out to fellow Comely contender Crazy Beautiful in the 1 1/16-mile Seneca in October at Churchill.

Trained by Phil Bauer, Played Hard will be making her Aqueduct debut, breaking from post 5 with Martin Garcia aboard.

Rounding out the field is Shalimar Gardens, owned by Barry Schwartz, who was fourth in her stakes debut in the Grade 2 Raven Run last out in October at Keeneland for trainer Horacio DePaz [post 3, Hall of Famer John Velazquez]; Bees and Honey, making her stakes bow in her firth career start for trainer J. Reeve McGaughey [post 7, Jose Lezcano]; Hybrid Eclipse, fourth in the Grade 3 Delaware Oaks, for trainer Linda Rice [post 1, Dylan Davis]; and Ninetypercentbrynn, who will be seeking her first stakes win in her first graded stakes appearance for trainer Butch Reid [post 2, Eric Cancel].