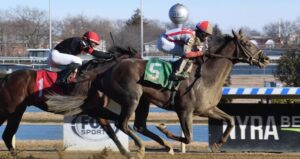 Trained by four-time Eclipse Award-winning trainer Chad Brown, the More Than Ready chestnut graduated at first asking sprinting six furlongs in January at Aqueduct Racetrack. The chestnut colt followed with a pair of game efforts at the Big A, finishing second by a nose to Weyburn in the one-mile Grade 3 Gotham in March and third to Bourbonic in the nine-furlong Grade 2 Wood Memorial in April.

Following an even fifth in the Grade 1 Preakness in May at Pimlico, Crowded Trade did not return until August when a distant third in the Grade 2 Amsterdam, contested over a sloppy and sealed main track at Saratoga Race Course.

He enters from a troubled fifth in a 6 1/2-furlong allowance sprint on September 4 at Saratoga won by Baby Yoda, who exited that effort to finish third in the Grade 2 Vosburgh here last Saturday.

“He breezed well on it. He’s certainly bred on top for it,” Brown said. “I’m going to try and change it up with that horse a little bit. He didn’t develop the way we hoped on the dirt, so we’ll try this.”

Joel Rosario has the call from the inside post.

The versatile Cairo Prince gray entered the six-furlong Widener turf sprint for sophomores from a narrow nose loss to Carle Place-rival Arzak in the six-furlong Tom Ridge, contested at six furlongs over the Presque Isle synthetic on August 2.

Sonata Stable’s Arzak, a Not This Time chestnut trained by Mike Trombetta, endured a troubled trip in the Allied Forces when bumped at the start, trailing the field of eight by eight lengths. Arzak was tipped out for the stretch run by Irad Ortiz, Jr. and closed to finish third.

A $575,000 purchase at the OBS Spring Sale of 2-Year-Olds in Training, Arzak was also compromised at the start when third in the My Frenchman, a 5 ½-furlong sprint over yielding Monmouth Park turf three starts back on July 11.

“He’s been a little unlucky and I’m hoping we can turn that around,” Trombetta said. “He’s not really fast out of the gate. He has a lot of speed but that first step or two he’s not as fast as you’d like him to be and inevitably he seems to find a way to get next to a horse that likes to bump into us. We just need everyone to get out of there straight and he’ll be fine.”

The durable Arzak has posted a record of 8-2-1-1 in 2021, including a 3 1/4-length optional-claiming score traveling one-mile over the Tampa Bay turf in his seasonal debut in addition to his Tom Ridge coup.

“He’s solid. He’s run with good horses and I’m hoping his turn is coming,” Trombetta said. “He ran really good at Presque Isle and I do think he has an affinity for the synthetic as well, so we’ll do that again at some point also.”

Breeze Easy’s Easy Time, a dark bay son of Not This Time, has made his last three starts in graded company, including a win in the Grade 3 Marine at 1 1/16-miles over the Woodbine Tapeta in July.

Trained by Hall of Famer Mark Casse, Easy Time followed with a fifth in the one-mile Grade 2 Hall of Fame in August on the Saratoga turf ahead of a closing second last out in the 6 1/2-furlong Franklin-Simpson on September 11 at Kentucky Downs.

Easy Time will emerge from post 5 under Luis Saez.