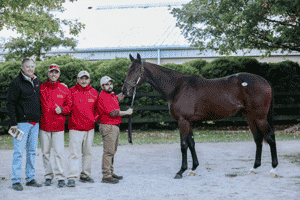 From the Fasig-Tipton Media Team:

A lively renewal of the Kentucky October Yearlings sale continued Wednesday in Lexington, Kentucky, led by the record-setting sale of Sam-Son Farm-bred Street Sense colt from the family of Hall of Famer Dance Smartly.

A colt by Street Sense lit up the board shortly after 6:00 PM when sold for a sale record $925,000 to West Bloodstock, agent for Repole Stable and St. Elias Stable (video). The price matched that paid for a Storm Cat filly at the 1999 edition of the sale and set a new highwater mark for a colt in the sale’s history.

Offered as Hip 1107 by Sam-Son Farm, the bay colt is out of the winning A.P. Indy mare Dance With Doves, whose four winners to date including Grade 2 winner Dance Again (Awesome Again) and graded stakes placed Swoop and Strike (Smart Strike).

“Honestly, the sales topper’s a little bittersweet,” said Fasig-Tipton President Boyd Browning. “(Sam-Son has) had a wonderful program. They’ve (brought) wonderful horses to us here in October. Tom Zweisler and Dave Whitford are true professionals in every sense of the word… It was a great tribute to them and to the Samuel family to set the record here in October.”

Rounding out the top five prices of the third session were:

“It’s nice to see people walk around smiling, even the buyers,” added Browning. “It feels really good to be involved in a marketplace that’s active and healthy… It’s been a great three days and we hope to finish off strong tomorrow.”

The final session of this year’s Kentucky October Yearlings sale begins Thursday at 10 AM. Results are available online.