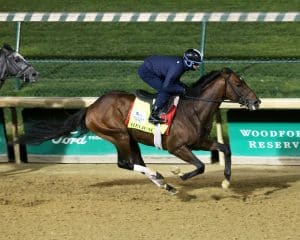 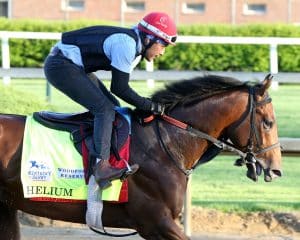 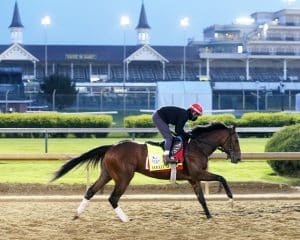 Mark Casse has a good problem on his hands where D. J. Stable’s Helium is concerned, but it’s a problem for the Hall of Fame trainer nonetheless.

Nearly a year and a half has passed since the son of Ironicus last visited the winner’s circle and, in the quest to try and give the 4-year-old gelding a confidence boost, Casse wanted to find a spot where his charge’s back class could move to the forefront. The issue with having a horse that has graded victories and a Kentucky Derby (G1) start on their resume, however, is there aren’t a ton of conditions that allow for softer landings.

Hence, as the horses passed the entry box for the $70,000 R.A. “Cowboy” Jones Overnight Stakes at Ellis Park on Aug. 6, it became clear that whoever prevails in the one-mile test over the main track will have a far from easy go of things.

“I mean, there are no easy spots ever. There are just not easy spots,” Casse said. “There are not easy places to run when you have horses who have achieved like Helium has achieved, because your opportunities are limited. You see that in the entries. It’s a good race, a tough race.”

When Helium breaks from the outside post 10 on Saturday, the 2021 Tampa Bay Derby (G2) winner will be part of a salty group of older runners – including three other grades stakes victors – trying to recapture their best form.

Though he hasn’t triumphed in seven starts since that victory at Tampa Bay Downs, Helium has repeatedly held his own against strong company. The only time he has been off the board in ten career starts came when he finished a respectable eighth in the 2021 Kentucky Derby and he heads into the Cowboy Jones off a trio of runner-up finishes in as many starts this season.

After opening his 2022 campaign with a pair of second-place outings over the all-weather surface at Woodbine, Helium took place honors in the Michael G. Schaefer Memorial Stakes at Horseshoe Indianapolis on July 9, an effort Casse believes is the most encouraging run he has seen from the bay gelding of late.

“I thought his couple efforts at Woodbine were lackluster to be honest with you. But I thought his last race at Indiana was really good,” Casse said. “He kind of had a wide trip and I thought it was a really good race. The good news for us is, since that race, he’s come back and trained very well.

“We’re looking for something to get him kickstarted and get a confidence builder but, like I said it’s extremely difficult because there are very few races he can even run in. It’s a difficulty that we have with older stakes horses. You can see that in the horses (in this field).”

Trained by Dallas Stewart, Title Ready is also trying to halt a seven-race losing skid though his defeats during that span including outings in the 2021 Dubai World Cup (G1) and this year’s Pegasus World Cup Invitational (G1). The Charles Fipke homebred has run into the buzzsaw that is Olympiad in his last two starts, finishing third behind the Bill Mott trainee in the May 6 Alysheba Stakes (G2) at Churchill Downs and fifth next time out in the July 2 Stephen Foster Stakes (G2).

Last Samurai, formerly trained by Stewart and now conditioned by the legendary D. Wayne Lukas, also exits the Stephen Foster having finished seventh in what was his first start since upsetting the field in the Oaklawn Handicap.

The Brad Cox-trained Night Ops annexed the 2020 Prairie Meadows Cornhusker Handicap (G3) but hasn’t run since opening his 6-year-old campaign with a fourth-place finish in an allowance optional claiming race at Oaklawn on Jan. 9.

Where those aforementioned rivals typically come from off the pace, Helium can flash early speed if needed.

“He is very tactical so if he breaks and there is not a lot of speed, he could be on the lead if not very close to it,” Casse said.

One who could dictate the early going is Tut’s Revenge, who is wheeling back in the Cowboy Jones two weeks after running second in the Jeff Hall Memorial Stakes at the Pea Patch. The 6-year-old Eskendereya gelding rated third in that most recent outing and was beaten just a neck by Necker Island in the 6 ½-furlong test.