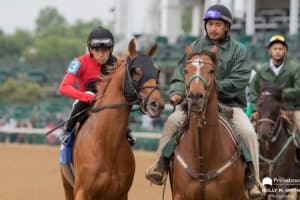 Over the last four years, one horse has been at the center of Louisiana racing and fans of the local sport – Ivery Sisters Racing’s Monte Man. His trainer and Fair Grounds’ 2021 title-winner, Ron Faucheux has announced that it is time for this 9-year old gelding to step away from the race track and to spend his retirement at Clear Creek Stud, where his sire Custom for Carlos stands.

“Val Murrel who owns Clear Creek, he bred Monte Man and is happy to take him in,” Faucheux said. “Clear Creek is the nicest farm in Louisiana–at this point, being a 9-year old, he’s been so great to us, we’d rather see him have a happy life from this point forward.”

Know that Monte Man is doing fine, but he did not come back from his Friday workout as hoped, giving connections pause about pursuing the plan of running in the Costa Rising Stakes, a race Monte Man won twice and finished 2nd in by a nose.

“He’s sound as can be,” Faucheux said. “Looks great, walks great, legs look good. He just has something a little feint. Something that some trainers would push through, but I’m not going to take any chances.”

Claimed for $25,000 by Ivery Sisters Racing in October of 2017, in his first start for trainer Ron Faucheux Monte Man won a local optional-claimer that December, which was the start of a seven-race winning streak. Monte Man went out in stakes-winning fashion, scoring the ninth and final stakes win of his career in the $100,000 Louisiana Champions Day Sprint on December 11, 2021.

“I was looking at the win pictures last night,” Faucheux said. “He’s beaten some great horses. He hasn’t run worse than fourth since the end of his 4-year old career. Goes to show you how much heart that horse has. He might not run the best numbers as some of the Kentucky sprinters floating around the country, but he has been so consistent throughout the process. That’s all you can ask–they run to their ability.”

“I feel honored to have trained him throughout that process,” Faucheux said. “He’s been a barn favorite, a fan favorite, a special horse–you could hear it in John Dooley’s emotional call of his last race.”

O Besos is Back by a Nose!
Wins going Two, but Connections Consider One-turn Future

The fifth place finisher in the 2021 Kentucky Derby, Bernard Racing, Tagg Team Racing, West Point Thoroughbreds and Terry Stephens’ O Besos made his much-anticipated return count, winning race #7 on Sunday, an $47,000 AOC for 4-year-olds and up. Beating 4.60-1 Intrepid Heart by a nose, O Besos was sent out as the .60-1 favorite.

“He had to run a little harder than we were hoping for,” trainer Greg Foley said. “He got banged around a little out of the gate. I don’t know how much he loved it on the inside there.

Looked like he put Intrepid Heart away at the ⅛ pole.”

“We got that under his belt,” Foley said. “He looked great this morning, licked his tub, he didn’t act like it took anything out of him. The horse looks amazing. He’s put on 150 pounds of muscle in the right places. I couldn’t be any happier with the way he looks.”

After the Kentucky Derby, O Besos ran 2nd in the Matt Winn (G3) at Churchill Downs on May 29, 2021. Winning at 1 1/16 miles off the bench on Sunday, his connections are now considering what’s next.

“I just got to figure out what this horse really wants to do,” Foley said. “I’m not so sure he is a true long-distance horse. He might be a monster going 7/8ths or a one-turn mile.”

Sent out as the 2.00-1 second favorite, 2019 Pennsylvania Derby winner who has not won a race since, Math Wizard finished last of the pack 20 lengths back.

Speaking of past Kentucky Derby horses, Foley and his team are also weighing their options for Lloyd Madison Farms, IV’s Major Fed, who was last seen finishing fifth in the locally run Tenacious Stakes the day after Christmas.

“Might be the same speech,” Foley said. “He could be great at one-turn. Other than that, all his brothers and sisters were really good turf horses, too, so we might stick him on the grass next time.”