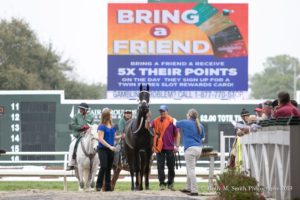 When the music comes on over the barn speakers, 3-year old gelding Behemah Star sticks his head out of his stall and begins to nod in rhythm. A first-level allowance winner last out in his fourth start, he has reason to be feeling good. As do his Star Guitar-sired stablemates. Off to a red-hot start and the leading trainer through the first three weeks of the meet, all eight victories are with Star Guitar’s band, including Ova Charged’s memorable victory in the Louisiana Champions Day Ladies Sprint. There’s something about these Star Guitars. There’s something about Jose Camejo.

With the love Evelyn Benoit of Brittlyn Stables has for her sire Star Guitar and her drive to prove his worth, she wouldn’t have it any other way. And there is an underdog’s story to both sire and trainer. Winner of 24 out of 30 starts with earnings of $1,749,862 with a storied career that began in 2007, Star Guitar’s two starts outside of Louisiana were loses in graded stakes races: the Alysheba (G3) at Churchill Downs and the Texas Mile (G3) at Lone Star. Never once the runner-up in any of his races, breeders often pass on Star Guitar’s $7,500 stud fee, which only fuels Benoit’s drive for success.

“Star Guitar is a gift from heaven,” Benoit said. “I’ve had so much faith in this stallion, I don’t want to breed to anyone else. I’ve had the best, including three American Pharoah’s, and they can’t beat my Star Guitar’s.”

Originally from Venezuela, Jose Camejo did not originally chart a course to being one of Fair Grounds’ most successful trainers. A multiple stakes winning jockey, between 2003 and 2012, Jose Camejo won 130 races with lifetime earnings $1,849,882. After a spill at Evangeline Downs where he broke his neck, at age 33 Camejo decided to become a trainer. Since 2013 he has won at a rate of 21%: 1,261 starts 262 wins with a total earnings of $6,480,971.

On a daily basis at Fair Grounds, Camejo is competing against some of our sport’s best in Brad Cox, Steve Asmussen, Al Stall, Tom Amoss, Bret Calhoun and Mike Stidham. His success includes the tutelage of Minit to Stardom–Star Guitar’s leading progeny in terms of earnings of $536,180, winning 9 times out of 14 starts–another bred by Benoit.

“I know she is a very competitive woman, me as well,” Camejo said. “Being from another country and being competitive with bigger trainers, some of the best trainers in the country–you can’t know how much this (her faith) means to me.”

Often found in the best jockeys, his confidence and connection to horses carries over into his presence, approach, and care for his animals. His horses look beautiful in the stalls, the paddock, and kicking home in the stretch. Take positivity, confidence and couple that with Jose Camejo and team’s focus around the barn and you can’t help but wonder what’s next for these runners.

“Everybody is feeling good. I’m really happy with the barn right now,”Camejo said. “The team–everything. We came out with a different attitude, and we are focused on what we do. We are gonna have a good meet. I’m now in the barn everyday. I used to have an assistant, but I don’t have anybody right now. This is good because it keeps me more focused and on top of what we are doing here. I think this is one of the best teams I have ever had. Everybody is focused on what we are doing. We are in good shape, we really are.”

Let’s start at the top: Ova Charged. A winner by 9+ lengths against Louisiana-bred optional claiming rivals on November 28 at Fair Grounds, she proved up to the task against much better company less than two weeks later in the Louisiana Champions Day Ladies Sprint, defeating G2 winner Cilla in a race that lived up to its billing. A slow start put Ova Charged far behind and it took a fearless heart coming home to win in the final strides. Now 4 for 5, with her one loss a second behind the multiple graded stakes winning Souper Sensational in the Victory Ride Stakes (G3) at Belmont, the 3-year old by Star Guitar and out of dam Charged Cotton will take a break now and gear back up for the races in 2022.

“She is doing fantastic,” Camejo said. “We don’t have anything specific in mind. We’re not going to run her right now. We were asking for a lot. I’m glad everything worked out and now I will just wait for her to tell me when she is ready. She will take her time in the barn. We might bring her to my house for a week.”

But for fans who can’t wait for that classy bloodline to reemerge, do know that Ova Charged has a full sister: 2-year old filly Charged Temp. Winner of a maiden special weight at Monmouth Park in July with a 71 Bris speed figure, she has tried two stakes and two allowances since, only to come up short, so what’s the plan?

I walked with Jose, from stall to stall.

“I am gonna try something different this time,” Camejo said of Charged Temp. “I am going to try her on the turf. I don’t think she liked the dirt much. But I think she is going to be better on the turf. Ova Charged is one of a kind, she runs on everything. But this one is more for the turf.”

Camejo’s face lights up when he gets the chance to talk about his 2-year old filly Moment to Dream.

“She is gonna win next time,” Camejo said “She got tired last time (11-27) . She needed a race. Next time she is going to be tough to beat. She is one of my favorites.”

Speaking of the head-bobbing Behemah Star, Camejo said they’re going to stretch him out to a mile next time out.

“He came out great,” Camejo said. “I like this one a lot. This is one of the horses of my future. He’s still a little green, but every time he races he gets more mature, better and better.”

Then there is the 3-year old recent maiden winner (12-4), gelding Moment Of Stardom:

“He’s running amazing–he surprised me,” Camejo said. “I knew he was gonna run good but not that great. He really exploded in the last 1/16th, he exploded. He has found himself now. He has figured out how to run already. We are keeping him in great shape. He came back great. We are waiting for the next race and see how that goes.”

The 4-year old gelding Win Ya Win, winner of second-level allowance at Fair Grounds last out, appears to be headed in the right direction as well.

“Came out great and is ready for the next,” Camejo said.

The 3-year old filly Satisfy U, 2nd last out at Fair Grounds in her second maiden claiming try:

“Came back good, as well,” Camejo said “The horse has been running good, and she has improved a lot. We have been trying to be focused and will keep her at that level. She’s another one that is getting ready for the next race. I think she is gonna win next time.”

“She ran a hell of a race and she gives you everything on the track,” Camejo said. “She came back good. We are going to give her a little bit of time. And then bring her back 100% in good shape and she is another one I expect to win.”

After the fury of eight victories through the first three weekends, Camejo is the first to give credit to the owner of the majority of horses in his barn, Evelyn Benoit.

“She has given me one of the biggest opportunities in my life,” Camejo said. “I take it very seriously and feel very blessed. I’m glad that everything worked out good and the horses are running good. I make sure (when I enter them) that the horses are going to be right there.”

The respect is mutual.

“I can’t say enough about Jose Camejo and what he’s done for me,” Benoit said following Ova Charged’s signature win. “He’s put me on the map on the East Coast and nationally. Star Guitar babies have won in California, New York and Kentucky. We are just so pleased. It’s not easy to do this.”

His focus, his work ethic, and his hands-on approach are key factors to Camejo’s success as well.

“I might not win the standings (title), I might not have the material,” Camejo said. “But I can promise you right now we are going to fight and it will be a tough fight. I know every horse I bring to the race is going to be 1, 2, 3–right there. I am the first one in the barn in the morning and the last one to leave. I am on top of this.”

As I stood next to Ova Charged and company I couldn’t help but feel similar to Camejo: in the presence of greatness and somewhat as an outsider. As someone who knows little of horses beyond the PPs, I was hesitant to get close and give her a rub on the nose. What Camejo told me speaks to his approach and position in this sport, and no doubt extends from his days as a jockey.

“Same as when you are riding,” Camejo said. “Don’t show fear when you’re by them.”

Sign Up
The Pressbox · 28 minutes ago
@thepressboxlts
May I please get 2 followers to COPY and re-post this tweet?