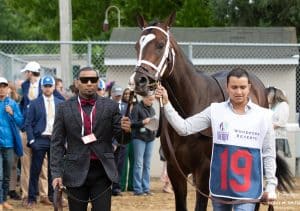 (Zozos on the walk over to the 2022 Kentucky Derby / Photos by Holly M. Smith)

Barry and Jonie Butzow’s homebred Zozos will vie for his first stakes score in Saturday’s $150,000 Louisiana (G3) presented by Reylne GI by Hagyard. The newly turned 4-year-old will travel 1 1/16 miles against a field of nine older runners at Fair Grounds Race Course & Slots.

The 77th running of The Louisiana is slated as race 13 on Saturday’s 14-race  “Road to the Derby Day” card, which features the Lecomte (G3) and the Silverbulletday presented by Fasig-Tipton, both prep races on the Road to the Kentucky Derby and Oaks that will award 20-8-6-4-2 qualifying points to the top-five finishers. First post is noon CT.

Not having started since his 10th place finish in the 2022 Kentucky Derby, Zozos returned in a second-level allowance at Fair Grounds in mid-December. He won impressively and by open lengths after settling as far back as sixth and having to run down a game Treasury. He earned a 94 Brisnet Speed figure. After the race, his trainer Brad Cox indicated that there was no rush to enter Zozos in a stake, and he would likely run through his conditions, but here he is instead in the Louisiana.

“I was pretty happy with his last couple works and just how he looks physically, how he’s moving,” Brad Cox said. “I figured it would be a good spot to try a stake again. It’s back in five weeks but he’s doing well and that’s the biggest reason I decided to run him in the (Louisiana).”

Lightly raced, the son of Munnings broke his maiden sprinting last year on the Sunday of “Road to the Derby” weekend. He stepped forward nicely winning an allowance at Oaklawn Park, then ran in the $1 million Twin Spires.com Louisiana Derby (G2) where he earned his seat to Kentucky Derby 148 after setting the pace and holding on for second to Epicenter. With three wins in five starts, Zozos will retain the services of Corey Lanerie who has been having an excellent meet. Lanerie is also scheduled to ride Tapit Shoes for Brad Cox in race 9, a second-level allowance on the undercard that has the look of a Derby prep. Drawing post No. 8, Zozos gets the nod as the 3-1 morning-line favorite.

Cox has also entered barn-newcomer Forzo Di Oro in The Louisiana. Don Alberto Stable’s lightly-raced 6-year-old horse won the 2020 Discovery (G3) while with Bill Mott. He made one run in the care of Jerry Hollendorfer before being transferred to the Cox barn prior to the Tenacious, where he finished a creditable third.

Run Classic, a colossal 5-year-old horse by Runhappy, was on the Derby trail in 2021, but after finishing 8th in the Louisiana Derby, he suffered a sore suspensory. Once back in training, he developed a sprained joint capsule. Eighteen months later, he returned to the track in good form quickly moving through his conditions winning two in a row, first at Churchill then at Keeneland. Both were sprints and both produced big numbers with his Keeneland effort earning a career-best 103 Brisnet Speed figure.

“He can definitely produce his best run going two-turns,” Calhoun said. “Yeah, if you put a gun to my head and asked ‘what’s his perfect distance,’ I’d probably say seven-eighths or a one-turn mile,” Calhoun said.

Running last out in Oaklawn’s 1 1/8 mile Tinsel Stakes, he pressed and weakened, finishing a disappointing fourth as the favorite.

“I don’t think he liked the track (at Oaklawn),” Calhoun said. “He never was himself and wasn’t comfortable and confident on that track. I don’t care. (Even) if that last race was seven-eighths, I don’t think the distance had anything to do with it. He’s doing very, very well. We’ll run him out of his own stall this time, and I think he’ll show up.”

If you are going to be the older route champ then you’ve got to beat the champ and currently that Fair Grounds’ title goes to Lothenbach Stables’ Happy American. When beating a field of 11 in the $100,000 Tenacious on “Road to the Derby Kickoff Day,” the 5-year-old horse trained by Neil Pessin made his signature late rally, but this time he pulled away from a game Mr. Wireless to win by 2 3/4 lengths.

“He came out of it pulling the hot walker around the barn like he didn’t even run,” Pessin said. “He’s doing great. He’s an improving horse, getting better every day. Happy American’s just getting bigger and better and we’re looking forward to a big upcoming year with him.”

Tabbed as the 4-1 morning line co-second favorite, Happy American retains the services of James Graham who will guide him out of post No. 5.

Prior to finishing second in the Tenacious, Mr. Wireless got his nose down in front of pacesetter Here Mi Song and a fast-closing South Bend to win an allowance race over a one-turn mile in November at Churchill Downs. The 2021 Oklahoma and West Virginia Derby winner has won six of his 13 races, three of those coming at the Louisiana distance.

“I keep scratching my head about how he got beat in the (Tenacious),” Calhoun said. “He had a little minor external infection on one of his pasterns, so maybe he was a little stressed with that. Maybe we just got outrun, but I thought when he made his move and opened up that we were home. He’s coming into the race doing great, and I think he’ll run a big race as well (as Run Classic). If it rains, I think Mr. Wireless will run well on an off track.”

Drawn to the far outside in post No. 9, Mr. Wireless will be piloted by Deshawn Parker.

“Ideally we’ll run Gentle Soul on the turf, but he’ll have to draw in (to the Col E.R. Bradley Stakes),” Calhoun said.

The Pressbox2 hours ago
New post added at The Pressbox - Hoosier Philly: Could KY Derby Be in Her Future?

(Hoosier Philly / Photos by Holly M. Smith) Will Hoosier Philly Run In Kentucky Derby? It is too soon to begin the discussion in earnest — perhaps — but the questions are starting to percolate. If the undefeated and spectacular filly Hoosier Philly continues to dominate her classmates this Sprin...
2    View on Facebook