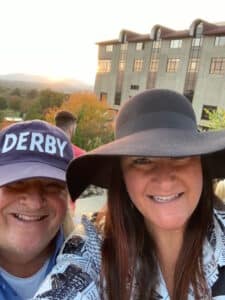 On Friday, I just want to say that I had six less winners than rider Tyler Gaffalione.

I took the goose egg. I was blanked. I was zip-lined. In a season of feast and famine for me at Churchill Downs, I couldn’t even find a drum leg already devoured on Friday.

I picked a combined 21 races at both Churchill Downs and Indiana Grand. Factored out to 12 wins, 9 seconds and 8 thirds.

And, truthfully, on Friday, while I was blanked at the win column, I did have 7 wins and 5 thirds at the big oval in Louisville, too.

So…not discouraged. Not at all. Just motivated.

So…let’s take a whack at the 11-race card at Churchill Downs on Saturday.

Also, remember, we have the free chili at the Louisville Thoroughbred Society beginning at 6:30 p.m. this evening as we paid tribute to the fallen jockey Miguel Mena. Come visit with us. We would enjoy seeing you.

1st: 3-4-7/5/6…Scratch 1-2…Heart Full of Soul (3) gets the nod in the ole’ lid-lifter. This 3YO Violence filly comes in off a 4th in the last out here on Nov. 3. That was much better than looks and against much better than what she should face here, with the significant drop in class here. Barn wins with .25% when dropping into the claiming ranks for the first time. After all, this one ran in two Stakes events earlier this year. At this distance? Two wins in 4 tries. Honest. Sariah Sariah (4) is running for just the 2nd time since February. Ran a solid 4th in the return effort, but that was in April. Off since, again. Now, this one returns for a top barn operation who does win with .25% of those away this long. Works are good coming in. Drops into the claiming ranks for the first time since a win last year. Threat. Bizzy Echo (7) drops into the claiming ranks; goes from the turf to the dirt; and picks up the best rider in the world who is not named Tyler Gaffalione. Last time this one ran on the dirt and in claiming ranks? Won here in June. Look out. I bet the 3-7 across the board and then box the top 3 in the exactas. I will key the top 3 numbers over/under the 5 in two smaller units.

3rd: 2/1-3/5-4…The second “Key Play of the Day” will come here with Rushie (2). This 4YO son of Liam’s Map returns to one of his favorite tracks, where he won the 2020 G2 Pat Day Mile over some real good ones. In 2 lifetime starts here, has that win. Returned here on Oct. 2 in the G3 Ack Ack. Ran a better-than-looks 4th in that one. Look at the replay. Was checked in that one and now will get Gaffalione up — who just won 6 times on Friday. Wow. Perfect match. I bet the 2 to win/place/show and then key the 2 over/under the numbers listed. More with the 1-3.

5th: 3-2-8/9-5-1-6/4…Scratch 7…Lady Arsinoe (3) returns here for Team Amoss, and this one just ran a huge one at KEE. Tired at the end of that one to finish 3rd, but the barn wins with .21% in the MSW ranks and should benefit from the first effort. Works are good since the race, too. Let’s go. Icy Stare Down (2) is a Brad Cox pupil, and this barn is sure to warm up before this meet ends. The rider has teamed up with this barn to go 5-1-5 in the last 17 outs. Will make the debut here and the barn wins with .17% of those. Parlance (8) is a possible longshot in this battle. Ran very well on debut before spitting the bit here in mid-September. Dropped the rider in the pre-game festivities in that one. Suggests that she may have expended a little energy before the race, too. If she is a bit better behaved today? Look out. I bet the 3-2 across the board and then box the top 3 in the exactas. I will key the 3-2 over/under the 8-9-5-1-6 in two smaller units.

6th: 3-4-6/7/1-8/2…Scratch 5…Charter Oak (3) should be prepped and raring to go in this spot. Broke the maiden in the last start at Los Alamitos. Has since been transferred to the barn of Brad Cox. Woks are OK, but should fit with this group. Mr Creed (4) won the last time out, as well, and comes in here off a nice performance over this track. Don’t dismiss this one. Ginnsu Warrior (6) is the “other” Cox horse in this grouping and gets the services of Rosario. Won the MSW up at Indy Grand last time out. Been off since August, but the barn wins with .23% of those returning off this kind of a layup. I bet the 4 — take note — to win/place/show and then box the top 3 in the exactas. I will key the top 3 over/under the 7 in two smaller units.

7th: 1-2/5-4/3-7…Scratch 6…Miss T Too (1) has not run since November. Of 2020. Off for a year and a week. But this one is training so great for a HOF trainer and gets the services of Rosario. This one is very salty when right and has a win and two 2nds in 3 starts here. Going just 5.5 furlongs over the dirt and will gas from the rail. If she can last…Miss Mosaic (2) is the one to beat. Comes out of three straight Stakes events and has been respectable in all of them. Will stalk and close. Look out late. I bet the 1-2 across the board and then box these two sternly in the exactas. I will key the 1-2 over/under the 5-4 in two smaller units.

8th: 7-10-3/9-5/6-8-2-1/4…Seal Beach (7) is a 2YO son of Midshipman and look who he finished in front of just two starts ago. The “Show” horse came back to win the next outing and then ran 3rd in the Breeders’ Cup Juvenile. Wow. I go here. I go strong. Epicenter (10) should improve off the first start here in September. Switches to a top jockey and the barn wins with .23% on the 2nd start. Surfer Dude (3) ran up against our top pick in the same race two back. Could be a factor. I bet the 7. Strong. I box the top three numbers in the exactas. Strong. I key the 7 over/under all the numbers listed in two smaller units, too. Strong.

9th: 3/7-5/6-2…The final “Key Play of the Day” comes right here — or does it? Well, it would have until a scratch a bit later in the day. But first things first. Girl With a Dream (3) is legit. She broke the maiden in a fun run at Ellis Park in July. Came right back to run in the G1 Spinaway Stakes at Saratoga. Lost all chance at the start of that one, with a bad break. Came back to run 2nd as the odds-on favorite at KEE in October. Exchanged some bumps in the early stages of that one and that may have cost her a bit of energy in the late going. I go here. I bet the 3 to win/place/show and then key the 3 over/under the numbers listed in the exactas. More with the 7-5.

10th: 6-5/7/2/3…Scratch 4…Dream Supreme Stakes…This 6-furlong sprint may have been better than the Breeders’ Cup Filly & Mare Sprint until the late scratch this morning by the grand mare Sconsin. She is stellar and gutty as hell. With her out, her chief rival, Bell’s the One (6), certainly looks like a standout. In 7 starts here, she is 3-3-0 and in 7 starts at this distance, she has 6 wins and a second. (Only to Sconsin.) Bell’s a good one. In any race. In any book. But don’t discount Club Car (5) who nearly defeated here in the  G2 TCA Stakes at KEE on Oct. 9. Either one of these two may have won the Breeders’ Cup race, too. This one will be coming late and gets a new rider in Rosario. I would not dismiss. I bet the 6-5 across the board and then box these two strong in the exacta.